Knox Heritage Honors the Best Preservation Work From the Last Year: Who Won and Why Do Old Buildings Matter? 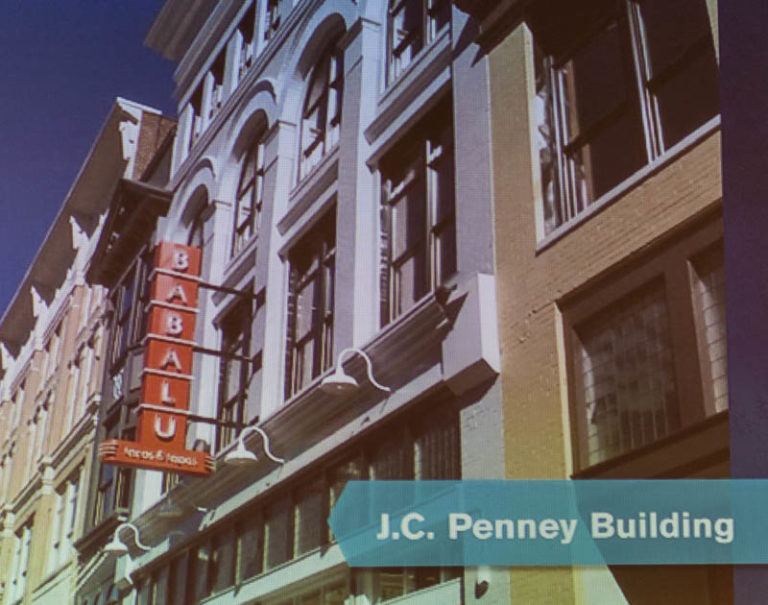 Last night Knox Heritage held its annual celebration of the best work done in the cause of preservation in the past year. The celebration is always held in the Bijou Theatre and for good reason, beyond the obvious spectacular nature of the space. Plans to demolish the Bijou Theatre in 1974 brought together a group of people who recognized that our history needs to be preserved. They saved the Bijou and continued their efforts, eventually becoming Knox Heritage.

While lamenting what is lost and sounding the alarm for properties which are in trouble, it’s important to note that great victories are being achieved in the attempt to save and rehabilitate older buildings. After decades of demolishing large portions of our building stock, Knoxville is doing much better. Clearly, preservationists don’t win them all – and every loss stings – but the tide has turned and very good things are happening to our building stock.

Jeff Devlin, keynote speaker for the event, is host of DIY Network’s “Stone House Revival.” Focused on refining his craft as a carpenter, his interest has long focused on historic homes and other buildings. Commenting on his Jack Neely-led tour of the city, he noted that he is used to 200+ year old buildings and ours are more on the lines of 100 or just over, for the most part. Interestingly, the Lamar House Hotel which contains the present Bijou Theatre, will be 200 years old next year.

He also provided the most humorous image of the night when he said he wishes he could put a thumb drive into Jack Neely’s brain and copy the information it contains. Don’t we all? He also spoke of the importance of preserving buildings because it tells the story of where we have been, who we are and how we got to this place. Offering an interesting aside, he questioned what is being built now that people will want to preserve a hundred years from now.

The Mill and Mine, renovated and preserved by Dewhirst Properties (David Dewhirst and Mark Heinz) is a beautiful space as so many of us have learned as we’ve enjoyed a growing number of excellent concerts and events there. It’s a jewel that was nearly lost just a few years ago to fire. Kevin Nelson was recognized for his work at 2027 Washington Avenue in the Parkridge community (check out hometours of the neighborhood – 2014-1, 2014-2, 2015), where so many homes have been brought back from the near-dead.

P. Smith along with Sara and Sean Alsobrooks were recognized for their work on the building serving as home to Maker’s Donuts. I first told you about P. Smith and her cool building over two years ago before the building was reworked into the new home for Remedy Coffee and Maker’s Donuts.

It would be hard not to honor the resurgence and the return from the absolute dead of the JC Penney Building (Before and After) on Gay Street. Hatcher Hill brought it back from beyond dead to make it into an absolutely fabulous and useful building, currently home to condos, apartments, Babalu Restaurant, Archer’s BBQ and Maple Hall bowling alley.

Dewhirst Properties and K-Brew were also recognized for their fabulous remake of an older building on Broadway for the new home for K-Brew. It’s another fabulous preservation effort and the space there is among the coolest. It did put me in mind of another space that I wish could have been honored, so I’ll give it the Urban Guy Plus-One award: Balter Beerworks. That is another fabulous save and a great job with a building conversion.

An older home at 801 Eleanor Street in Fourth and Gill was recognized. The home had lost its porch somewhere along the way (I hate it when that happens!) and Sara and Sean Martin of Open Door Architecture and owner Laura Cole saw to it that a newly designed, but architecturally appropriate porch was added.

Jon Clark, Ron Turner and McCarty Holsaple McCarty were recognized for the great work they did on the Daniel (Before/After). Dewhirst Properties was, again, recognized for the Saloon Building at the corner of Central Street and Depot Avenue. I hope to have a look inside that one, soon. Jeffrey Nash and the Courtland Group were recognized for their work on the new Patricia Nash Headquarters and showroom, which I highlighted several days ago.

The final downtown building to be honored was Blount Mansion which received the Greystone Award. Kim Trent made the point that the building is the only building in Knoxville designated as a National Historic Landmark. It’s also one of our oldest at somewhere over 220 years old.

Other recognitions include Jeff Wilke as “Volunteer of  the Year,” Bill and Caty Hodges with the “Spirit of Kristopher” award and Becky Wade as “Preservationist of the Year.”

And why do these people undertake these sometimes daunting and financially improbable ventures? Because we are saving our story. Because it’s the ecologically responsible thing to do. Because we love a peek into our past. It’s also important if we want people to be interested in visiting our city. Our older buildings are what make us different from Any Other Place, USA. They are, in the end, the record of who we are.

Programing Notes: Don’t miss the Scruffy City Comedy Festival this weekend and the homecoming concert on Market Square tomorrow night with Cereus Bright and Drew Holcombe and the Neighbors. Also, join me on 90.3, WUTK, The Rock at 10:00 AM Sunday morning when my guest will be Carol Evans of Legacy Parks. We’ll talk about the Urban Wilderness, the newly developed Baker Creek Reserve and more. You can here podcasts of previous programs at the Podcast link at the top of this page.