Downtown Knoxville to get DreamBikes 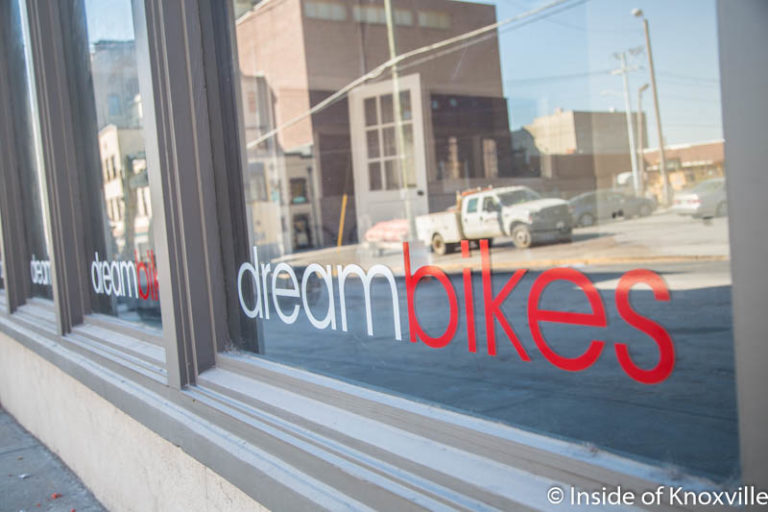 DreamBikes, a 501(c)3 formed by Trek Bikes in 2008, is an organization that has “refurbished and returned 10,000 bikes to the community,” while, “providing jobs for over 100 teens.” The organization achieved these accomplishments through two locations: Madison and Milwaukee, Wisconsin.

Expanding after eight years, the organization will add stores in three other cities: a suburb of Chicago, Rochester, New York and Knoxville, Tennessee. The Knoxville shop and store, in the McNutt-Burks Building at 309 N. Central Street, will assume the location vacated by Rocky Top Crossfit which moved to a new location at 1412 N. 6th Street. The business will open Monday, January 2.

I met with manager Preston Flaherty and assistant manager Mitchell Connell to talk about DreamBikes and what we might expect in the new Knoxville location. The answers are pretty complicated as the organization tries to accomplish multiple goals with their model. The track record of the Wisconsin locations bode very well for success in our city.

Preston is originally from Knoxville and has family here, though his family also owns a horse ranch in Wyoming. He attended West High School for two years, but graduated from Webb in Bellbuckle, before attending the University of Wyoming. Graduating in 2014 with a degree in Range Land Ecology and Watershed Management, he worked as a “raft guide in Colorado on the Arkansas and a naturalist guide in Yellowstone national park,” with plans to work in outdoor rehabilitation with troubled teens.

Of his time in Jackson Hole, working in Yellowstone, he told me, “I loved what I was doing, but didn’t feel I was changing anyone’s life.” The opportunity to do that presented itself when he visited Knoxville, where his mother operates the Big Love Bus, and talked to David Dewhirst. From David he heard that DreamBikes was interested in a Knoxville location and that he might be a good match. He contacted them and learned that Knoxville was on their radar largely because of the proximity Legacy Parks and the Urban Wilderness, paired with a population in the city they felt might be helped by their model. He contacted them, had a series of interviews and accepted the challenge of opening the Knoxville location.

Mitchell is originally from Nashville, but attended U.T. While there he worked with UT’s Outdoor Program, majored in Environmental Studies and Studio Art and fell so much in love with Knoxville’s affordable outdoor opportunities that he stayed after graduation. He worked in the bike shop at REI and hiked the Appalachian Trail. Upon his return he saw a flier advertising the position and it reminded him of Oasis Center in Nashville where he had volunteered. He applied for the job and was quickly hired.

The two are very excited about the business which involves a multifaceted model. No longer dependent on Trek, which provides initial support, the business strives to be self-sustaining. In short, used bicycles are donated to the group and are repaired by local teens from socio-economically challenged families. Provided with paid positions, teens learn bike repair, sales and are tutored and mentored in an effort to help them graduate from high school and pursue either college or trade school.

Ten-to-fifteen teens will be employed at the Knoxville location, along with Preston, Mitchell and a Program Manager. The business will function as a repair shop – either for the donated bikes or for any bicycles brought in for repair. Donated and refurbished bicycles will be sold along with a full complement of accessories and gear. Money donated locally or generated either from repairs or sales will remain local to support the continuing efforts of the shop.

The teens will be involved in a three-year program. The first year is utilized to determine their strengths and set goals, while the second is focused on working toward the goal and the final year is directed at having them mentor others. They are required, in addition to their paid employment, to log volunteer hours. They may, for example, be involved in building bike trails or job shadowing. Teen employees will be able to apply for scholarships for bike mechanic or college scholarships.

Additionally, a mobile repair unit will visit local neighborhoods to repair children’s bikes and up to one hundred bikes will be given away each year after they are repaired and refurbished. Trek president John Burke placed an early emphasis on the neighborhood repair effort. Local non-profit agencies will be the recipients and distributors of bikes either as needed or in groups to be distributed as the need arises.

The plan is to help teens gain job and people skills while moving toward graduation. The programs in Wisconsin claim a 100% success rate for graduation. Teens also are introduced to a cycling life-style. Group rides will be arranged to show teens they can get to jobs, entertainment and recreation. Connecting inner-city teens with the greenways and the urban wilderness will be a priority.

While Trek remains a sponsor, donor and supporter, local stores are intended to stand on their own and for ours to succeed, it will need your help. First, if you are interested in either a position as a program manager or as one of the two part-time mechanics they plan to employ, please message them via their Facebook Page or call (307)699-1455.  Additionally, they need cash donations which you can donate via PayPal. Note that your donation is for Knoxville and the money will be directed locally toward salaries for the teens and, eventually, toward scholarships.

Donations of bikes are also being accepted. Between now and the end of the year, they may be dropped off at 309 N. Central Street on Saturdays from 9:00 AM to Noon. If that’s not possible for you, call the number above. After the first of the year they will be open most days and bikes will be accepted any time. Bikes will be distributed to best use – either repaired as a giveaway or to be sold, or given to other groups to distribute or to harvest their parts and recycle those that have run their course. They also need other donations and have posted a “wish list” on their Facebook Page. Take a look.

Finally, volunteers will be needed for a range of support activities from tutoring to leading bike rides, working on bikes and providing volunteer opportunities for the teens. Help is even needed for painting the walls in the new shop. On that front, an artist who would be interested in providing an inspirational mural would be appreciated, but even if your proficiency level is wielding a roller, they can use the help.

At the very least, give them a “like” on Facebook. Really. Right now. This helps them know they are supported in our community and allows you to keep up with what they have going on. And really, we are the winners. We get another bike shop downtown and a boost to our cycling culture. Knoxville moves another step toward being the kind of place we want it to be by helping our citizens and making the city just a little more bike-oriented which is good for our health and our air. Support them.