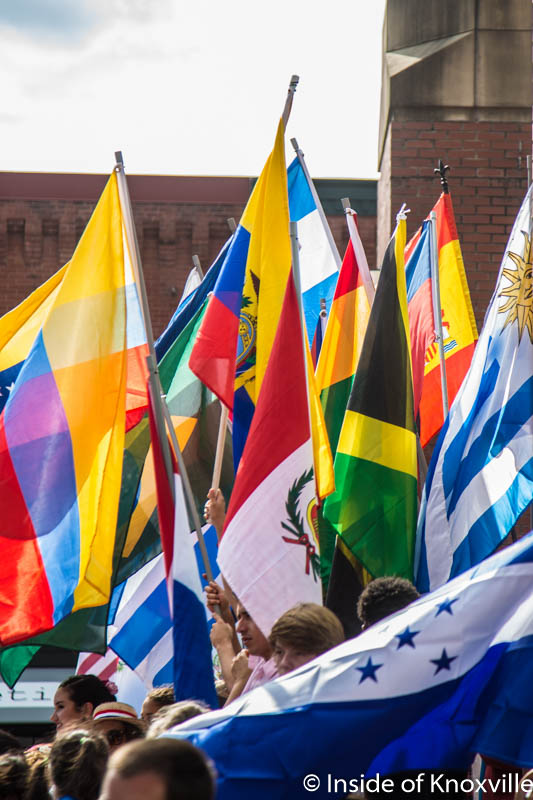 I’ve said before that Hola is one of my favorite festivals of the year. Knoxville has just a little more of an international, big city feel with the sights and sounds of other cultures filling Market Square and nearby areas. Yesterday’s festival replicated the success of the many years of Hola in downtown Knoxville. While it has shifted locations several times, its focus on Latin cultures has remained singular and celebratory.

It strikes a nice balance of education and entertainment, with exposure to booths with facts about the various countries represented, but with fun in every direction enabling it to avoid becoming a dry educational exercise. The food, music, colorful dress and dance offer something for nearly anyone to enjoy.

Soul Sacrifice, a Santana tribute band provided some of our favorite entertainment on Sunday. We settled into one of our favorite spots on the square – Market House Cafe, drank coffee, enjoyed the cool day and soaked in the music. It lead to an itunes Santana-fest when we returned home.

Urban Girl, along with many of the children enjoyed face painting and other games. We watched the dancers a bit and hit up the food vendors for some excellent food (I think it was Columbian) and enjoyed the craft vendors. Urban Girl bought a bracelet that caught her fancy and Urban Boy took in all of it he could before falling asleep on his mother’s back.

One disappointment for us was that we more-or-less missed the parade. We misinterpreted the schedule to say the parade began at 3:30 PM, when it actually ended then. We got to see the countries gathered on the stage, heard Mayor Rogero’s remarks and watched as she was presented with a Sunsphere replica with the number 225 affixed to it, reflecting Knoxville’s 225th birthday celebration. A mariachi band performed “Happy Birthday,” as the crowd sang along. Fun was had by all, and we’ll anticipate Hola 2017.