Downtown Streets to be Paved – Is That Really Necessary? 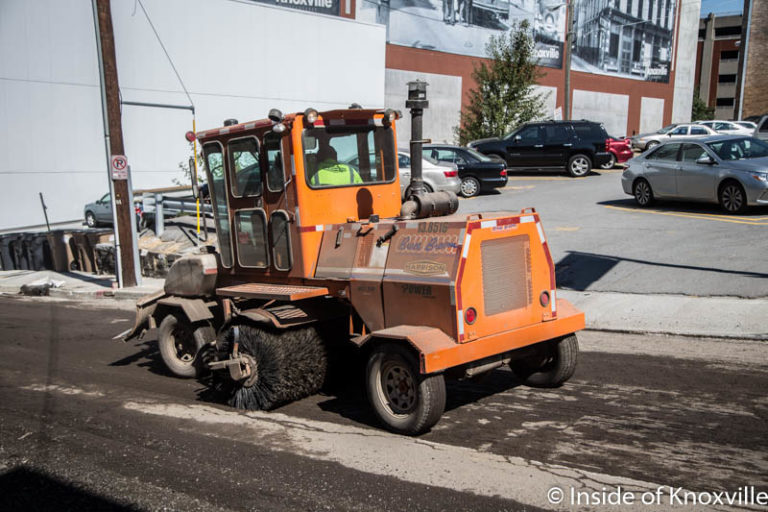 Anyone who drives downtown streets – whether downtown worker, resident or simply visitor knows that the caption must be be facetious, right? Certainly any of us, as is often the case for me, who try to drive into or out of downtown with a coffee cup balanced in our lap has experienced the near impossibility of avoiding spills due to cracks, crevices, uneven pavement, patches and potholes in the road. And bless those poor souls I see every day, driving downtown while texting. It must be so tempting to take that driving hand to help steady the cell phone. So, what do I mean by the question in the lead?

First, here are the facts according to a press release sent out earlier this week:

“Starting this week and continuing through the end of fall, more than 6 miles of downtown City streets will be repaved.

“The $600,000 combined investment by the City of Knoxville and Knoxville Utilities Board in new asphalt is being coordinated to coincide with KUB’s near completion of its Downtown Century II Utilities Upgrade project. KUB has replaced and upgraded utility infrastructure from the Tennessee River north to Jackson Avenue – some of it in service since the 1800s – about six months ahead of schedule.

“The coordination maximizes efficiency, both in terms of stewardship of taxpayer dollars and time,” said City Engineering Director Jim Hagerman. “It made sense to finish the underground utility work and then do the resurfacing work. This way, we’ve avoided the waste of repaving a street, then tearing it up for utility work, then repaving it again.

“We appreciate KUB finishing these major upgrades ahead of schedule. Once we’re finished with the repaving, downtown streets will be in excellent shape and will remain that way for at least another decade.”

“Most of downtown will be resurfaced, including portions or all of these streets:

Several parts of the press release jumped out at me a bit: I didn’t realize, for example, there would be six miles of downtown streets, though a little mental math makes that seem more logical. Also, I didn’t realize the KUB work was ahead of schedule. It seems to have been underway since approximately the end of the World’s Fair. When we no longer have to find different routes into and out of downtown with each passing hour and shifting of equipment on downtown streets, what will we do for entertainment?

Last week I spoke to a local group and I got a question that threw me a bit. I’m used to being asked about downtown history and, while I’ve learned a little, I usually defer to Jack Neely when I get those. I’m pretty comfortable talking about current downtown happenings – it’s my focus every day. But this question wasn’t either of those. After a presentation about the evolution of my blog and of downtown, a gentleman asked me what I see in the future. I don’t consider myself a prophet or futurist, so I was taken back a bit.

But it did remind me of an article I read recently in Fortune magazine. In “Who Will Build the Next Great Car Company?” (online title) by Erin Griffith, the author discusses the increasing intersection between Silicon Valley and Detroit as we race toward driverless cars. Scott Lindstrom, manager of driver-assist technologies at Ford Motor Co. referenced 2012 when, “the idea of self-driving cars looked, to Ford’s leadership, like a frivolous Silicon Valley moonshot. Just four years later the company is set, by the end of this year, “to have the largest fleet of autonomous test vehicles of any automaker.”

“Thanks to cheap sensors, powerful machine-learning technology, and a kick in the butt from the likes of Google googl and Tesla Motors tsla , driverless vehicles are becoming a sooner-than-you-think reality. General Motors, Toyota, Nissan, Volkswagen, Fiat-Chrysler, BMW, and just about every other auto company are wading—some cautiously and some with big, headline-grabbing moves—into territory that executives in Detroit and elsewhere not long ago considered a science-fiction fantasy.

She states, “Everything changed in March, when GM spent $1 billion on a tiny self-driving startup called Cruise Automation.” Tech companies, car companies and companies like Uber and Lyft are positioning themselves for the anticipated market. “In May, Toyota struck a partnership with Uber, Volkswagen invested $300 million in ride-hailing company Gett, Apple poured $1 billion into China’s Didi Chuxing, and Google partnered with Fiat Chrysler to outfit 100 Pacifica minivans with self-driving technology. All in the span of one month.”

It raises questions like, “Will we even need to own private cars anymore? Automakers, technology companies, and ambitious startups all agree that this transformation isn’t just headlines and hype, but inevitable. Every person I interviewed for this article deliberately pointed out that, no, really—this is happening. Even regulators are onboard. “We’ve got a clock ticking,” U.S. Transportation Secretary Anthony Foxx told Reuters in April. “This technology is coming. Ready or not, it’s coming.”

Safety, of course, comes front and center to most of us older drivers, but the article states, “Car accidents cause more than 1 million deaths and 15 million injuries globally each year. Over 90% of them are caused by human error.” Further, “Beyond saving lives, consider the money saved (traffic accidents cause $500 billion in economic damage worldwide each year), the benefits to cities (parking lots become green spaces), the increases in productivity (commuters can work in transit; truckers can sleep without pulling over), and improvements in accessibility.”

The article goes on to suggest that car companies may change their entire business model to include driverless cars that are sold as fleets or operated by the companies themselves. The companies have taken to calling themselves, “mobility companies,” and are preparing for the time when the majority of drivers no longer feel a need to own a car. And it may be the tech companies that buy the car companies – Uber is now worth more than Ford and GM, for example. “Google’s self-driving pod-cars don’t even have a steering wheel or pedals.”

Other cogent points from the article:

“Many people assume Zoox, Google, and Uber (which revealed its own driverless test car in May) will eventually launch their own urban fleets of on-demand autonomous vehicles. Basically robo-taxis. For Uber, reducing or eliminating its army of more than 1 million contract drivers would slash the unprofitable startup’s costs. Uber currently pays about 75% of its income to drivers. Eliminating that outlay would likely make up for the new expense of buying, maintaining, and storing a fleet of driverless cars.

“At the Los Angeles Auto Show in November . . . Lyft president and co-founder John Zimmer deliver(ed) an ultimatum to the automotive industry: “You can fight [the end of car ownership], and that will probably not turn out well. Or you can acknowledge that this is happening. This is real, serious, and going to change your world.” GM responded to that ultimatum by investing $500 million in Lyft – the same night the speech was given. GM later spent $1 billion to acquire, “Cruise, a 2½-year-old startup building a software platform for autonomous vehicles.

“Many experts don’t expect that the world will adopt Level 4 autonomy—the ability to summon a car that goes from point A to point B without human interference—for 25 years, or a full generational change. But partial autonomy arrived much sooner than anyone expected. Google already has demonstrated “A to B” technology that works. By 2021, one of Mobileye’s automotive clients (Aviram won’t say which) will have it too. Five years may seem like forever to the hoodie-wearing tech crowd, but “in our industry,” Aviram says, “2021 is like tomorrow.”

“Next year GM will launch a semiautonomous Super Cruise feature that allows for hands-free driving in its Cadillac CT6 at the same time that it develops “straight to Level 4” technology within its subsidiary Cruise. Ford is also trying to strike a balance between evolution, with its vehicle lineup’s semiautonomous features, and revolution, with its test fleet of driverless cars. Ford executives insist it is not totally contradictory to protect the company’s existing business while also building technology that will make it obsolete.”

So, back to that question at the top of the article. Of course, paving the roads and maintaining our system of large highways near and around downtown is necessary. Of course, we need parking lots, parking garages, auto-dealerships, gas stations and auto-repair shops all around town. But the day may be coming – and coming sooner than any of us imagined – when that kind of massive infrastructure and devotion to the automobile will become a relic of a past era. Massive parking garages could become strange artifacts in a few short years and valuable urban property may be re-purposed to people, rather than cars.

So, we need to do this paving and it will make all our lives better. We have to maintain what we have built for the automobile. But, in ten years when that pavement wears out, we are likely to be living in a rapidly changing transportation environment. And when the next conversation turns to building additional parking garages, we might do well to consider whether the auto-centric model of building cities will make sense in the future.

In the meantime, I’ll be pleased to have a steadier cup of coffee, and I’ll be glad the people texting will more easily be able to handle their phones with one hand.