The Knoxville Community Darkroom Hopes to Come to Downtown 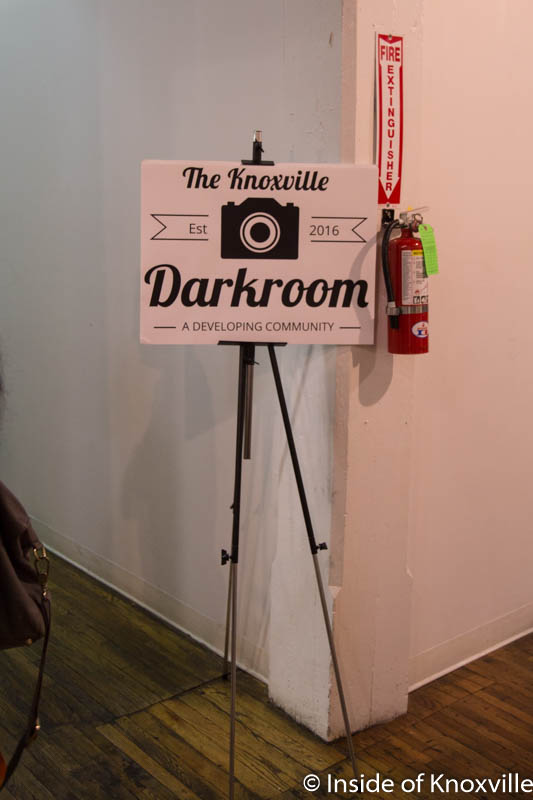 If there’s one thing that drives Lisa Flanary to distraction, it is probably the question that came to your mind when you read the headline: “Why do we need a darkroom? Nobody uses film, anymore.” She insists it’s not true, pointing out the move among many millinneals away from digital to analog – as in rejecting CDs and downloads for vinyl LPs. Some, she says, prefer the experience of developing film to downloading a digital file. She feels they appreciate the beauty of analog. And her classes at Carson Newman which focus on black and white developing are overfilled. But mostly she says, “When someone says ‘Who does film?, I want to shake them!”

Lisa is the force behind the drive to establish a darkroom as a shared space for local residents. An Associate Professor of Photography at Carson Newman, she’s taught there since 1998. She’s a fine art photographer focusing on 4X5 and medium format cameras. She has an MFA from ETSU in Photography and that subject is, obviously, an obsession for her. You can learn more about her at her website.

Recent history has not been kind to film photographers. Kodak, for example, stopped making printing paper, though they still make the chemicals used in developing. Access to darkrooms has become difficult in many cities unless you are taking a photography class at a university. Only Thompson Photo and F32 in Knoxville still develop film.

But there are counter-trends. Ilford Photo continues to make both chemicals and paper as they have for over 100 years. B&H offers paper, chemicals, equipment and film cameras. Also, cities all around us have begun to establish darkrooms. You’ll find the Asheville Darkroom and the Nashville Community Darkroom in their respective cities. You’ll also find them in Atlanta and all across the northeast and midwest. The Nashville darkroom is the model on which the Knoxville space will be based.

Education is a component of the Nashville Community Darkroom, and one the local group would like to replicate. Lisa feels there are many people who fondly remember developing photographs in high school and would like to return to the practice, perhaps with a little assistance. Others have never experienced a dark room and she feels many would like to attend classes to learn the process.

In addition to fee-based classes for individuals or student groups, the new center would offer memberships which would include developing time. They’ve done a workshop at A1 Lab Arts in Emory Place and definitely want their location to be downtown or near downtown. One of the professors from the program has worked with Striped Light and it would seem that area and many of the businesses and groups already operating there would be a good fit for a dark room.

What Lisa is envisioning is a space that not only includes a darkroom, but room for a gallery for shows. She’d like to see the group be able to provide a studio for shooting in addition to the darkroom for developing. The classes mentioned above would also require space, as well. Obviously, her vision simply starts with a dark room and expands to other logical components from there.

In her view it is more a combination of an artisan craft as well as art. She said, “Darkroom photography is a craft. Holding film, hands in the water – it’s hand-crafted, not removed like a digital experience. It’s a tactile experience.” She spoke reverentially of watching one of her favorite photographers, Keith Carter working in the darkroom. I’ve included a clip below. It’s a combination, she points out the elemental nature of working with water, light, chemistry and precious metals. It is, she says, a hands-on art. Saying the connection is more personal than digital, she references the thrill of seeing the photograph appear in the developing tray. She likens the feeling of developing film to having a young crush.

Of course, this costs money. A building or part of a building must be secured. Equipment, paper and chemicals must be purchased. They play to finance some of the costs via the classes  and paid memberships (the model used in other cities). They’d like to get a jump-start of a very modest $1000 and they’ve just started a Kickstarter campaign to reach that goal. I suspect my very cool readers will like this idea and could get them very close by the end of the day. Right? Any donations are tax deductible, as the organization is a 501(c)(3). If you think this is a cool addition to our city, help them out, if you can.