RedBooth: The Old City Business Behind the Business 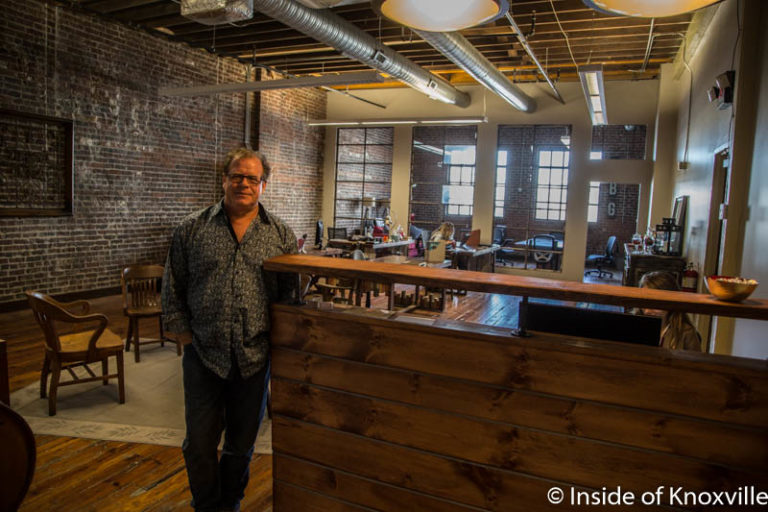 Roy McKinnon welcomed me into the beautiful office of RedBooth Group at 111 E. Jackson, Suite 203. The company, operated by Roy and his partner Sherry Wood is located to the rear of the building which was restored and renovated in 2010 by Laura and Sean Lyke (space is currently available). Filled with local art by Heather Whiteside, among others, and furnished with tables and chairs built by Sherry, Roy explained that they wanted to “create an artistic and free-flowing space.” It is from here they operate their restaurant consulting business.

Moving to Knoxville thirteen years ago to operate Club LeConte, Roy fell in love with Knoxville’s casual vibe and fell, particularly, in love with the Old City. Even that early, he says he knew he’d eventually want to open a business and it would be in that part of downtown. And he feels others are catching up with what Knoxville has known all along as he consults with businesses who would previously have looked to Asheville, Nashville, Chattanooga or Atlanta, but are know giving Knoxville serious consideration.

Originally from California, Roy grew up in Santa Anna, but lived in San Diego and Napa, spending most of his early working years in San Francisco. He sold real estate for years, but eventually left that world to follow his passion for food, attending the California Culinary Academy. After completing his culinary studies, he worked as sous chef for Beringer in their R&D kitchen. Now owned by Nestle, the company’s Home and Conference Center invited chefs and business owners from all over the world, including companies like the Ritz Carlton, for food and wine pairings as a sales tool for the vintner.

From the beginning, his attention was drawn to what wasn’t working well in kitchens. It’s a characteristic that he’s never lost as he moved through other positions. In Santa Fe he developed a culinary program in a state prison and saw their first class through. After working a series of jobs for companies like Aramark. ClubCorp hired him to operate the FSU Club and, in 2002, moved him to Knoxville to operate Club LeConte.

Around 2006 he helped launch Seasons restaurant, got the doors open and sold his share. He’d concluded he didn’t want to own restaurants, but rather wanted to help other people who owned restaurants. Realizing many people opened restaurants only to have them fail and, in the process, lose everything, he wanted to help people not make fatal mistakes with their new businesses. By this time he’d helped build a number of restaurants for others and felt his skill was in solving the problems they encountered. He opened RedBooth (originally under a different name – it became RedBooth in 2014) to provide them the support they need – whatever that may be – from marketing to decor, accounting or food preparation or presentation. He can’t do it all, but he knows experts in all the various areas of need for restaurants.

Initially, he worked with “businesses that were too far gone – and I didn’t get paid.” He learned to better determine who he could help. He also consults with customers who are considering opening a restaurant. More specifically, he says, “I spend a lot of time telling people not to open a restaurant.” Operating behind the scenes, he’s worked with well-known local chefs and business owners and others just starting out.

For a consulting fee, he walks people through such things as financial projections, but his emphasis is always on the daily reality of owning and operating a restaurant. He wants people to go in understanding the hours, the work and the many things that will divert their time and attention from what they thought they would be doing. He says he recommends they do something else if they could do so and be happy. For those with a passion only for food, he helps ensure they have a firm footing to start.

Feeling the restaurant industry is becoming a true profession, he doesn’t work with franchises, only with entrepreneurs. He says the basic financial formula is deceptively simple: A restaurant owner will spend (appropriately) 30% on food costs, 30% on labor and 30% on overhead, leaving 10% for profit. If these are not in line or if 10% of the total isn’t enough, then the business will struggle.

Fond of breaking concepts into percentages, he says their business has evolved into helping successful businesses shore up weaknesses (30%) and helping restaurants develop their concepts from the beginning (30%). Another 30% of the companies they work with are in serious trouble. Sometimes banks which are financing the restaurants reach out to RedBooth for help to keep the businesses from closing. Another 10% of the business is simply having conversations with people who are considering opening a restaurant. Some of the interventions are “one and done,” while others continue to solicit coaching or consulting.

Its a business most of us wouldn’t know about, but a business that is helping the businesses – particularly restaurants – succeed and continue to serve the city.