Knoxville May Be Ready for Some (European) Football! 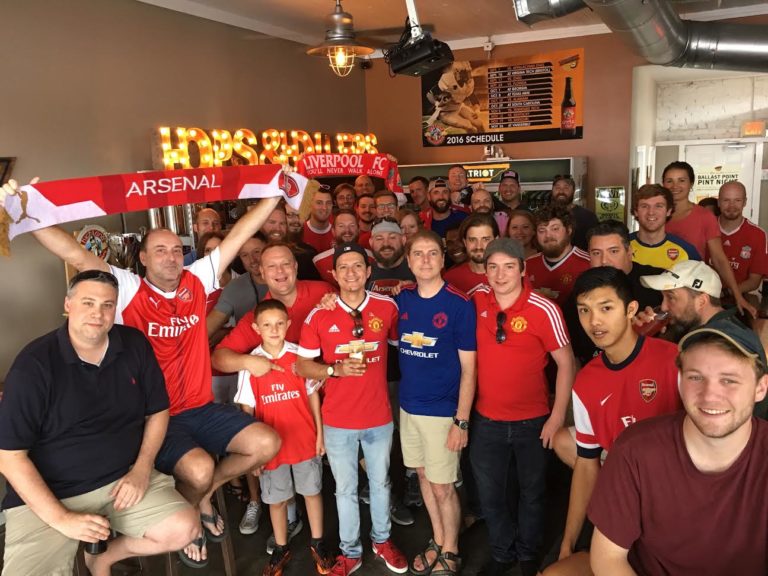 BPLKnox Crew at Hops and Hollers

It seems a stretch, doesn’t it? Knoxville is Big Orange Country: End of story. After the football games we all watched this past few days, however, it might be a perfect time for more than a few SEC fans to switch attention over to a different kind of football. And some Knoxville residents are ahead of the curve. It turns out that quite a cluster of our neighbors have already attached themselves to teams like Liverpool and Manchester United as opposed to Tennessee and Kentucky. I recently met wit Bradford Johnson of the Liverpool Football Supporter’s Club of Knoxville to find out just what’s happening here in the heart of NCAA Football land.

Bradford and his wife live in Fourth and Gill, having moved to Knoxville to take care of aging parents. His wife works at Club Le Conte and they’ve only recently settled into their home at Brownlow Condos. They are loving the neighborhood and the fact that they can walk to downtown. Meanwhile, they have a child in Canada and another who plays hockey for the University of Michigan. Bradford grew up in Chicago as a hockey fan, but eventually found his way to New Jersey, just across from New York City, which is where he was introduced to European football (soccer to Americans, if you haven’t caught on).

In the fall of 2009, while living in New Jersey, he was invited to the Football Factory, which is a European Football bar located in the base of the Empire State Building. Walking in the doors that day for the showing of the Champion’s League, he heard every language but English. Many of the groups sang their team anthems, including a French group which sang with particularly gusto. Assuming their team had won, he learned from his friend they had lost 4-1. He was hooked.

The Premier League – which is the English professional league for British football clubs – has garnered a larger following in recent years in the United States due to the fact that NBC picked it up. Bradford pointed out that, ironically, with NBC’s deal, it’s easier to follow the Premier League in the US than it is in England where fans have to attend the game or go to designated clubs for the match.

Being a fan of the sport requires being a fan of a team, and Bradford entered with no allegiances, so he was free to pick. Being, as he says, “Irish by marriage,” he decided to go with Liverpoool, which has very strong Irish ties. Interestingly, they have never won the Premier League, so he picked a club with history, but with no recent record of winning. The team plays at Anfield – which in European football parlance is their “grounds,” not their field. Bradford has been their twice since his conversion to the sport.

Watching games in England is quite an intense affair as he described it. He told the story of sitting in a hotel lobby bar when a Norwegian man saw his Steven Gerrard kit (jersey to you Amercian football fans) and invited him to a pub to watch the Liverpool game. It’s important to know where to watch the game there because, other than at the grounds, teams do not mix. Certain pubs are for particular teams and fans wearing another teams colors would be politely directed elsewhere. If watching a game with the other team’s fans, wearing one’s colors would be discouraged strongly.

One of Bradford’s many memorable stories of watching games came during the 2013/14 season. It was a season in which Liverpool battled for the Premier League Championship (though they came up short). Arriving at the 11th Street Pub in New York City early, the place soon filled with no more fans allowed to enter. It turned out the pub was in the neighborhood where Daniel Craig lives. He arrived minutes before the game only to be turned away prompting Bradford to realize that for one day he was cooler than James Bond.

Upon arrival in Knoxville, one of his first quests was to find a proper British Pub at which he thought he might watch the games. He quickly found the Crown and Goose and, ordering a drink at the bar, soon fell into friendly conversation with the bartender who he learned was also a Liverpool fan. Another fellow joined them at the bar as Bradford proceeded to make some disparaging remarks about rival team the Tottenham Hotspur. The bartender, looking uncomfortable, finally pointed out that the other fellow was then owner Jeffrey Nash who is – you guessed it – a big Tottenham fan.

Bradford founded the Liverpool Football Club Knox two years ago. Meeting for games is odd in the sense that most people don’t drink beer at 9:30 AM, but that’s when the games start. Still, he organized the first meeting to watch a game out at the Casual Pint in Farragut and found himself alone when the match started. He realized a couple of things. First, the supporters here aren’t numerous enough to support home pubs, so he knew he had to bring all the various team supporters together. He also realized over time that much of the support resides in or near downtown. Sunday morning game viewing was organized for Hops and Hollers and has been a big success. A recent 7:30 AM game, between the Liverpool Arsenal and the London Spurs, drew twenty people to Alliance Brewing on a Saturday morning.

The Sunday morning games are a more reasonable 11:00 AM and the crowds at Hops and Hollers have run as high as sixty-five in attendance. They call it the BPL (Barclay’s Premier League) – Knox breakfast club and members bring breakfast – some of them bringing griddles to cook on site.

As to what has fueled the rise in the popularity of the sport, Bradford points out that the current generation of Americans in their twenties and thirties grew up playing soccer. While there is major league soccer in the US, the attraction to an older, established league with traditions like those in European teams would be predictable. He chuckled when pointing out that this same age group now has children playing soccer and he knows some who struggle with the conflict between their children’s games and the broadcast of the European games.

He also points out that, in an age of diminishing attention spans and crowded schedules, European football games last an hour and forty-five minutes with no stoppages, so it’s less of a time commitment than a 3 1/2 hour (or more) American football game.

Sound like fun? You’ll find the group at Hops and Hollers this Saturday morning at 10:00 AM and Sunday morning at 11:00 AM with five games on the various televisions, with the featured game on the big screen. Wear your kit, if you have one, or come sporting neutral colors. You won’t be turned away in any case. Everyone is welcome – and who knows maybe it would be more fun than that other football product which has some fans pulling their hair out these last few days. Maybe it’s time to try the “real” football.

Two other items of business today: I’ve got two tickets to Alive After Five for use at your choice of shows this fall. Send me an email with the subject heading, “I Want to Be Alive After Five!” and I’ll select winners after tomorrow night (deadline midnight). Also, today is the deadline to vote in the Mercury’s Top Knox Reader’s Poll. I’d appreciate your vote, of course.