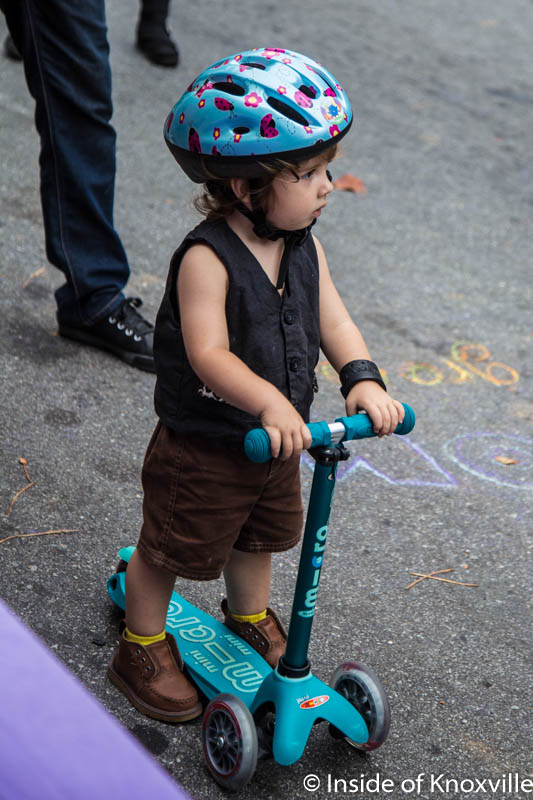 Contacted by organizers there who requested use of some of my photographs from Knoxville’s Open Streets events, I was curious about Asheville’s first Open Streets event – and a little surprised that we’d had two such events before their first. With Urban Woman feeling a bit under-the-weather, Urban Daughter agreed to join Urban Girl and myself on a little day-jaunt outside our usual environs.

Urban Girl and I had to take care of some business at WUTK, 90.3, first with my morning broadcast of Knoxcentric: Powered by Inside of Knoxville. She took the duties of signing out with my usual tagline and knocked it out of the park. She wrote about the experience, speaking of herself in the third person, and told me it was for the blog: “Urban Girl thought that the doughnuts were good. The place is very cool. He is awesome at this!” So there you have it, I have the Urban Girl seal of approval. After the show we grabbed some coffee, Urban Daughter and drove toward the mountains under drizzly skies. We easily parked and an elevator ride later we landed firmly in the middle of the event. The cool, apparently permanent, climbing wall on the side of the parking garage and the acrobatic yoga beside it gave us our first sample of the event.

The crowds were solid, though not spectacular. We wondered if more people would have attended if the weather had been bright, though we were happy endure a few sprinkles in exchange for notably cooler temperatures (high of 76) than we’ve endured recently. The crowds might have been a bit more colorful than we attract to our events, which is a given in Asheville, probably. And that underscores our primary reaction: We always enjoy visiting Asheville and somehow this event didn’t feel much different from our usual visits. That’s probably as much a compliment to the city as anything.

There were a number of activities on the street, of course. Urban Girl made a figure out of pipe cleaners, but that and twirling a baton were the only activities that really captured her attention. She said there were no children there, which isn’t true, but it did feel like perhaps there were fewer than we’ve been accustomed to.

The area hosting open streets also differed from ours in density of businesses. The gaps on our street which we fill with activities aren’t really there in this portion of Asheville. Numerous restaurants dotted the route, so the choice had obviously been made not to include street-vendors or food trucks. We had a hot dog and veggie burger early at the Woolworth’s Building, coffee at Trade and Lore and ended the day with dinner at Cucina 24. I’d polled friends on Facebook for restaurant names and that was one that was recommended. It was good, but we’ll look forward to trying others on the list when we return. Laughing Seed also caught my attention: International Vegetarian. I may have to try that one, also.

We learned about ART (Asheville Redefines Transit) in which for a dollar, there are multiple trips (Black Mountain, various areas of interest in Asheville) offered to riders. It is free in the downtown area. It would be like our Trolley’s offering rides from a central spot (like Market Square) to Ijams, the Urban Wilderness Trails, Homberg, Happy Holler and other destinations. Also, on the transit topic, I should note that we paid four dollars to park for about four or five hours. No free parking on the weekends.

Urban Girl enjoyed the Curio toy store which prompted a conversation about the absence of a toy store in downtown Knoxville, although she quickly pointed out there are toys in Mast General Store – and candy. So, that ended that conversation. She also enjoyed aSHEville Museum and picked up a couple of rings there from their shop. So, we wound up shopping a good bit.

Lots of activities were in evidence, as you might expect: Skating, walking, biking, soccer, yoga and other motion activities, four-square, hooping, climbing, dancing and probably others I’m forgetting. Lots of great sidewalk chalk activity preceded our arrival and a group worked on a large painting. Street performers and a few buskers kept things interesting.

We had as pleasant a day as could be hoped for in a drizzling rain. I wish more Asheville citizens had taken the opportunity to come out and I hope they will in the future. It will be fun to see how Asheville grows their event.

It’s not too early to mark your calendars for Knoxville’s next Open Streets event, which will take place October 9 from 2:00 PM – 6:00 PM. That date should surely provide some pleasant temperatures, so that’s something to look forward to. This round will take place just west of downtown on Sutherland and crossing over Kingston Pike into Homberg, so it will be interesting to see how it fares a little further out of the city center.