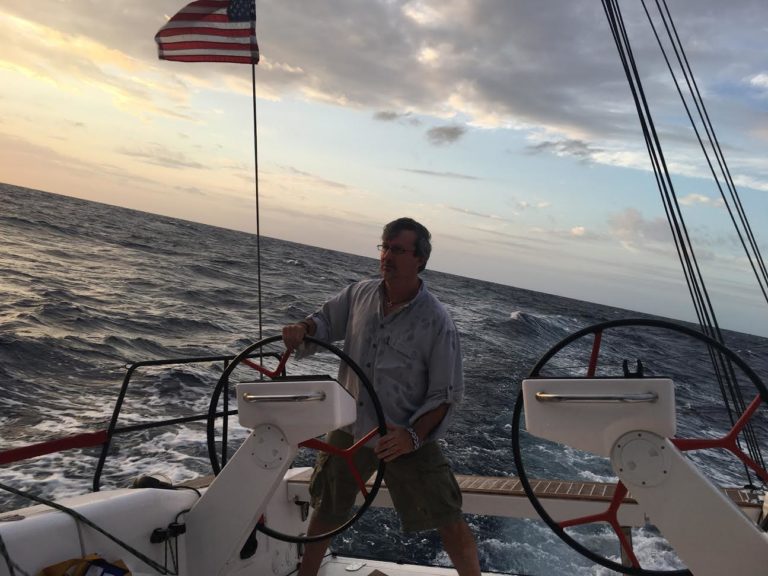 Buzz Goss at the Helm of the Pretty Vegas, Gulf of Mexico, April 2016

It’s an odd headline, isn’t it? It’s an even stranger story. I recently sat down with Buzz Goss, the Knoxville developer most widely known for his Marble Alley project, and found him more philosophical than I’ve found him before, perhaps even changed. As he spun his story of his recent near-death experience while at sail in Gulf of Mexico, the change was understandable. The conversation could easily have never happened had fate twisted in a slightly different direction.

The trip really started in early April, with Buzz collecting supplies – mostly things for children – to carry personally to Cuba on board a 44 foot sailboat. Plans called for leaving Key West with a three man crew to sail the 90 nautical miles (110 land miles) across the gulf to Havana, where Buzz planned to spend his birthday, delivering supplies and seeing the city first-hand. He also had bigger picture hopes in mind: “If I could link some of my friends and colleagues to the idea of helping the Cuban people, it would be a legacy. If we all did it, the idea would be bigger. That’s what I think America is all about. The more inclusive we are, the better we are. The part of America I identify with is giving back.”

So, with the intention of taking a humanitarian trip, he reached out to friends and acquaintances for donations. Some people donated supplies directly, from toothbrushes to school supplies. Others gave cash which Buzz used to purchase more supplies such as notebooks, pencils, left-handed baseball gloves (a specific request) and dolls. He chartered the forty-four foot racing-configured sloop and loaded the ten boxes of supplies. He’d reached out to contacts in Cuba to ensure the supplies would be distributed fairly and to the most needy. Local priests agreed to organize the effort.

Greg Hall joined the crew from Savannah, while Buzz, Robert Summers and Joe Fanduzz traveled from Knoxville. All were experienced boaters, though Buzz was the most experienced sailor. Originally from Miami, he’s sailed since he was a child. Beginning what he called, “serious sailing” twenty-five years ago, he’s sailed repeatedly in the Mediterranean, the Atlantic and the Gulf of Mexico.

April 16 arrived and the excited crew gathered for the trip. With approval from the Coast Guard and fees paid, they prepared to sail. Winds were high, but manageable. The biggest challenge would be crossing the Gulf Stream with its strong westward currents. The warmer water moving through that stretch can cause turbulence. They planned to leave at 4:00 PM and sail over night. Approaching Havana by day offers greater safety and while a motorized boat, leaving early, can make the trip by nightfall, a sailing vessel takes longer.

Depending on conditions, they would expect to arrive early morning. With a trip designed to move north to south and winds and currents coming from the east, predicting the length of the journey can be difficult. Any given trip might take twelve hours or it might take twenty. Departing on schedule, they focused on the adventure ahead: Crossing a big body of water, meeting new people, enjoying Cuba for a few days.

Winds were 15 to 20 knots out of the south east. Waves ran four to six feet, which Buzz termed, “rough, but not unbearable.” As they progressed and the sun began to set, both the winds and waves grew. The forecast called for consistent, not worsening conditions. Based on forecasts, Buzz considered the decision to leave, “reasonable.” Additionally, conditions often calm a bit overnight as the temperature differentials aren’t as large. By 9:00 PM, conditions continued deteriorating, though they still seemed manageable. At the edge of the Gulf Stream it became worse, still.

They reefed the sails to reduce the amount of wind they caught and slow the boat. Both wind and waves worsened, with winds gusting 20 to 27 knots. Boats naturally correct into the wind, which serves to empty air and allows the boat to right itself. As this began happening constantly, the crew determined sometime around midnight they should pull in all sails and utilize the motor. Waves had increased to a range of eight to twelve feet. One crew member became seasick, but everyone remained calm.

The genoa (smaller sail overlapping the mainsail) lowered as intended, but the mainsail, which was supposed to drop into a web of lines known as lazy jacks, failed to do so. With the large sail crumpled on the deck, the boat was in danger due both to reduced visibility looking around and over the sail and also because, catching wind randomly, it would render the boat unpredictable and unstable. Someone had to get the sail lashed, and there was only only one way to do it.

With the boat riding the massive waves and the wind whipping, Buzz climbed out onto the deck. Urged to take a life jacket, he declined, feeling the loss of mobility would prevent him from doing what was needed. He asked for a knife, instead. The rope had become entangled and he felt he could use the knife to straighten the rope and allow the sail to be safely lashed or stored. He’d worked for about ten minutes and was folding the sail when the boat pitched unexpectedly.

A wave from an unexpected direction had struck the boat sending a boom across the deck and knocking Buzz through the lifelines and overboard holding the sail. He crashed hard into the water and lost the sail. Still tethered to the boat by a line that had wrapped around his ankle, he quickly released it, knowing it would have sent him under the boat and he would have died. In the midst of a horrific situation, he said, “I never doubted I would be back on the boat. I trusted my mates.”

The trust was well placed as his crew immediately responded as perfectly as possible. One threw all the life jackets overboard where he’d gone into the water. This served to mark the spot where he entered the waves and provided a visual contact for those on board who might not be able to see him in the water, but might be able to see the reflective vests in the moonlight. Also, this provided the possibility he could grab one to stay afloat. They immediately cut the engines and marked the spot with a GPS.

He decided staying afloat wasn’t his biggest hurdle and chose to swim away from the life jackets and toward the boat. Beside it, he yelled, “I’m here.” They caught sight of him, but as the waves rolled both him and the boat, they could only intermittently maintain contact. He swam to the helm, understanding that to be behind the boat would get him killed. The bow of the boat was dipping so far into the water that he possibly could have caught it at its low point and ridden it up, but his mates found the right line, tied it to the boat, fashioned a loop on the free end and threw it overboard. He was able to grab it and climb the rope up onto the boat and through the lines to safety.

He said, “There are three reasons I made it back and only one is on me. First, the guys on the boat were on point. They knew what to do and did it. Second, I had the physical strength to pull myself on board” For this he gives credit to his trainer, Dunstan Kendrick, who pushed him so hard. He messaged Dunstan after the incident to say he had saved his life. The final variable, and the one to which he gives himself some credit, is “clarity of mind. If you are in the water and lose your composure, you don’t make it.”

The crew talked and, while Buzz wanted to continue to Havana, they had had enough, so they returned to Key West where they waited for the weather to improve. It didn’t and  the supplies are stored there waiting for another trip another time. He returned home, but some things were different. He returned more committed to his training, to surrounding himself with good people and, “to leave it better than you found it. I’m more committed to make things better.”

In those early hours after his near-death, he thought of all the plans he has for development in Knoxville which almost didn’t happen. He knew if he had died someone would do something on the remainder of the Marble Alley site, for example, but it wouldn’t be his vision. He returned more committed to press to do the things for Knoxville that he thinks are important. He almost didn’t have the chance.