I don’t plan on becoming a blog about what is coming up to do, though I do try to mention things all along. Still, when as much is happening downtown as has been happening the last few weeks, how can I not give you a heads-up? So, here’s another heads-up post about this weekend and it all starts tonight.

The big event for the whole family is the Dogwood Arts Parade which starts at 7:00 at the Auditorium and turns right onto Gay Street off Hill Avenue before traveling the length of Gay Street heading north. I’d encourage you to get away from Mast General Store and move down near the Bijou for the best viewing. It’s one of our very best parades of the year. 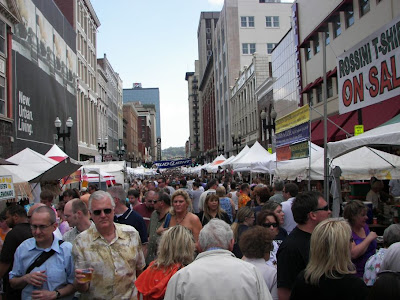 The big family event on Saturday is the Rossini Festival which takes over Gay Street all day Saturday from 11:00 AM to 9:00 PM. This is probably our largest downtown festival of the year and Gay Street will be packed with thousands of people enjoying special foods as well as drama and music. The event is sponsored by the Knoxville Opera Guild, so while there will be a great variety of music, you know which kind to expect to run into early and often.

But there are numerous other events and activities to pursue in the city for people of every interest. Here are a few:

Feeling like helping a good cause? You might want to join other participants on the World’s Fair Park for the Walk to Cure Diabetes. The focus is on finding a cure for Juvenile Diabetes and there will be informational booths as well as inflatable fun for the children.

Feel like stretching your muscles? Friday night at 6:00 Dogwood Arts is sponsoring a Kid’s Fun Run just before the big parade. Let them run and get tired and they should be more manageable while the floats pass by! After the parade, it’s the grown-ups turn with the Dogwood Mile race starting on Wall Avenue and running through downtown. If that doesn’t tire you out you can join the canoe and kayak race at Volunteer Landing Saturday morning at 10:00.

Feel like expressing your political opinion? There are at least two opportunities to get your activist on: Saturday morning at 10:00 AM beginning on Market Square is the March for Women. This is planned to coincide with similar marches across the country intended to answer what is perceived by many to be a “war on women” from certain of our right-leaning fellow citizens. Also on Saturday at 2:00 PM is the Workers Memorial Day Ceremony. The event will start with speakers in front of the City County Building and will move to the Gay Street Bridge where flowers will be dropped in remembrance of workers who have died on the job in Tennessee.

Feel like taking in some arts? Illumine will be shown in Krutch Park Extension for the final time from 8:30 to 10:00 Friday night. Using words and graphic design, this work is shown on the back side of the William F. Conley building. Another artistic option is the reading by author Jenny Bennett who will be reading from her book, Murder at the Jumpoff and will sign copies from 2:00 to 6:00 PM on Saturday.

There has to be something in that list that catches your attention. If nothing else, it’s always fun to stroll downtown and watch the people who are doing all these things. While you are at it you might pick up a few vegetables at the final preview week before the Market Square Farmers’ Market officially kicks off next weekend.