Regular readers might have noticed that I broke a trend by not naming this post, “Urban Mystery Picture #10.” The reason for this break from pattern is that as part of the reduction in posts over the next few weeks I’ll, of necessity, take a break from this series. For those of you who have longed for the fame and, well, fame that comes from winning the contest, do not dispair: It will return in a few weeks.

Now, to review, here are the photographs of last week’s location. First the challenge picture, then the beginner’s hint: 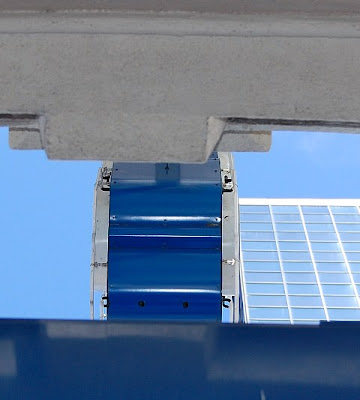 Our winner, Holly L’oiseau, correctly identified the location as the Bijou Theater. She said the particular color of blue in the first photograph was enough, but the windows in the second were a giveaway. Holly is our second winner from Powell, placing Powell neck and neck with the Holston Building in the battle for most winners. Holly must also be the first person I’ve ever known who had a name which includes every vowel! I love that last name. It may be soon changing, though I’m not certain, because Holly is planning her wedding in the Sunsphere! She says we are all invited. (I made that up, but it’s a good idea, don’t you think?) You can learn more about the wedding and about Holly at her two blogs: Can’t Fight the Write and Sunsphere Wedding.