There is a lot happening on and around Market Square this week. I’m not talking about the kinds of events that so often surprise me. I’m talking about comings and goings and permanent changes. For a long time I’ve watched and commented on several possibilities that are now coming to fruition – or can something come to counter-fruition if it isn’t fruitful? Maybe not.

On the interesting side of the ledger, we have the fact that someone is leaving the lights on in the Arnstein Building every day and night for the last several days. Does that mean someone new is snooping around trying to decide whether or not to take the plunge after the Urban Outfitter’s deal apparently fell through. I’m hoping strongly. It is such a great building in such a great location. I want something good to happen, there.

Also interesting are the latest developments at 37 Market Square. The brickwork on the side is complete, with modest architectural elements to add interest, such as the dentil work at the top and the triple row of arched bricks above the second story windows. What I’m curious about at this point is what will happen with the brick facade the developer was compelled to keep. It doesn’t match the new brick and it has a century of accumulated dirt and paint. Will they treat the brick somehow to make it match? Will they leave it unmatched so that it announces itself as the historic portion of the building? Will they keep the barely visible and historic inscriptions on the front or perhaps even re-paint them as the developers did on the JFG building? Stay tuned.

On the good news side of the ledger, today was the opening day for Fizz. It was exciting to meet Katheryn Rouse and welcome her to the neighborhood. She is from Knoxville and worked downtown many years ago – including at the Mercury Lounge. She took a sojourn to New York City, but is back and excited about the newly revitalized Market Square. Visit her. Buy her hand-crafted jewelry and support a new downtown business!

Now for the unfortunate news – at least to me and others who have enjoyed the Graffiti wall on (appropriately) Wall Avenue. I had written recently (as had Josh Flory at Property Scope) that the Graffiti wall would probably not survive the renovation to 36 Market Square. With the facade replaced on the front, who could imagine the side being left covered with the plywood that provided the surface for artists to copy “The Scream,” propagandists to rail against TVA and artists like Cynthia Markert and Brian Pittman to provide free art for the citizens?
This weekend I noticed too many bricks piled on the site to simply be destined for the front of the building. I also noted the fact that the fencing we’ve all walked around for the last, what, Millennium? Had been shifted from the front to snaking its way down the side of the building – blocking most of the Graffiti Wall. I walked downtown today to take pictures which I assumed would be among the last of the wall, only to discover that it is gone. The plywood has been removed. Caution tape surrounds most of the wall not fenced and broken windows are exposed, along with an interior that is many miles from being usable space.
I’ll conclude with a picture submitted by Chandler, who is a recent addition to the Urban Blues Family. He took the picture below of his friend who was visiting from Baltimore and suggested that I might use it. His submission turned out to be very timely. 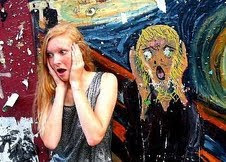