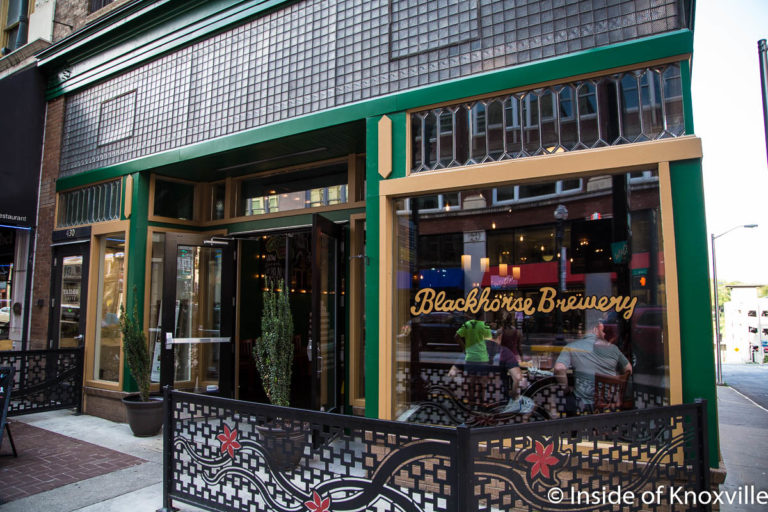 It was about four-and-a-half years ago that Blackhorse Pub and Brewery opened at 430 S. Gay Street. It replaced 5 Bar, a more upscale restaurant, with a more affordable kind of option. Last week the owners announced the closing of that location, indicating they had  been bought out by the new owners of the building who were placing their own concept at the location.

The Blackhorse Pub in downtown Knoxville served our last pints this morning to some of our staff as we said our goodbyes.

We are sad to announce that we have closed the Knoxville location as of today.

Our building got new ownership a few months ago who are looking to take it in a different direction. It is the same group developing the Kimball’s Building (Sapphire) next door. We have sold our operation to Kennedy Concepts who will be doing a remodel and opening a new concept there.

We have great memories made in downtown Knoxville with great staff and customers. Downtown after Tennessee beat Alabama this year was special. The Pride Parade before Covid. Those nights when the Tennessee, Bijou and Civic Auditorium all have events. There are lots of great events bring lots of life to downtown.

We have to admit we don’t miss KPD doing stings on Georgia weekend, KUB turning the Prominade Deck over to Premier Parking or the almost insurmountable homeless problem.

We would like to say thanks to all our customers who visited us downtown.

Please come see us in Alcoa.

So far, that’s all the information I’ve been able to find. At the least, we know that the business didn’t close for want of customers and that something is already planned to replace it. The closure was widely reported last week, so I waited in hopes of learning the new concept, which I haven’t so far.

The development group with the largest stake in the building is the Ephant group. They originally purchased the Hope Building (called the Kimball’s Building above) and later purchased the Tailor Lofts building. Hotel Cleo is slated to open in the Hope Building and may be part of a project that includes the upper stories of Tailor Lofts. Aaron Thompson and Jessica King return to the space they previously operated as Sapphire with their French concept, Lilou. Expect the openings sometime this spring.