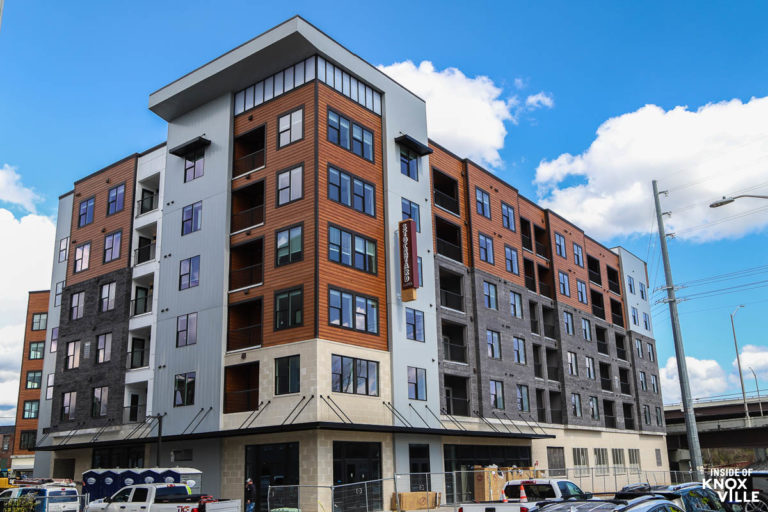 New construction, as opposed to renovating our great, older buildings, is still relatively new in downtown Knoxville. When I first introduced Stockyard Lofts, in July 2017, Marble Alley had been open less than two years. As the first new construction in Knoxville in more than a generation, it was at the vanguard of a shift in downtown construction. Stockyard Lofts, a $35 million project nearly five years in the making, will open in April, bringing 152 new units to downtown. It is second only to Marble Alley in the number of units included.

Daniel Smith, who partnered with Leigh Burch in the project, took me on a tour of the nearly-completed units. Over 50% of the total units are pre-leased and they have not opened the bottom two floors, meaning nearly all the apartments currently being offered are taken, though a few remain. They hope to have everyone into their new homes on all floors by sometime in May. He said the market is simply “very tight. We just finished an apartment complex in Oak Ridge with 226 units and it is 98% leased, with two buildings yet to be opened.”

First up was the commercial space, which will become a restaurant, in the southwest corner of the building. A patio, with outdoor seating will line two sides of the restaurant, including the frontage with Willow Avenue. A tenant has been identified and should formally sign a lease in the very short term. They will build out the space to their specifications and the hope would be to have the space open by sometime this fall.

The garage is built just to the east of the restaurant and includes two levels with 65 spaces on each. There are about 40 spaces outside. The parking may be accessed either from Willow or Jackson. A small alley allows entrance on Willow and a spacious entry flows off Jackson between Barley’s and the Knoxville Music Mural.

Inside on the main floor is an Amazon package room with lockers, the mail room and leasing and management offices. A club room is located on the second floor, as is a workout facility. The club room looks out onto an interior courtyard which will include grills, landscaping, a fire-pit feature, and a salt-water pool, with seating. A glass rail will line the open side facing the Old City, allowing unobstructed views. Each unit has a balcony, with some overlooking the courtyard and others with city views.

Architects for the project were Humphrey and Partners and construction was completed by Merrit Construction. Materials for the façade includes cast stone for the first floor. A dark brick covers the next three floors. The apparent wood bands accenting the exterior walls are, in fact, a fiber cement product. There are also two tones of hardy panels and metal accents.

Units have different backsplashes in the kitchens, but all include a washer and dryer provided by the developers. Each home has an island. Each unit is wi-fi ready, with built-in routers. To arrange for cable television and wi-fi, no visit from the cable company is required. The building is 20% two-bedrooms and 80% one-bedroom. The two bed-room units are 1250 square feet and the one-bed rooms are primarily 800 square feet, though some are slightly smaller. Ten work-force house units are included at a reduced rate for qualifying tenants.