Inside of New York: People, Streets and Small Adventures 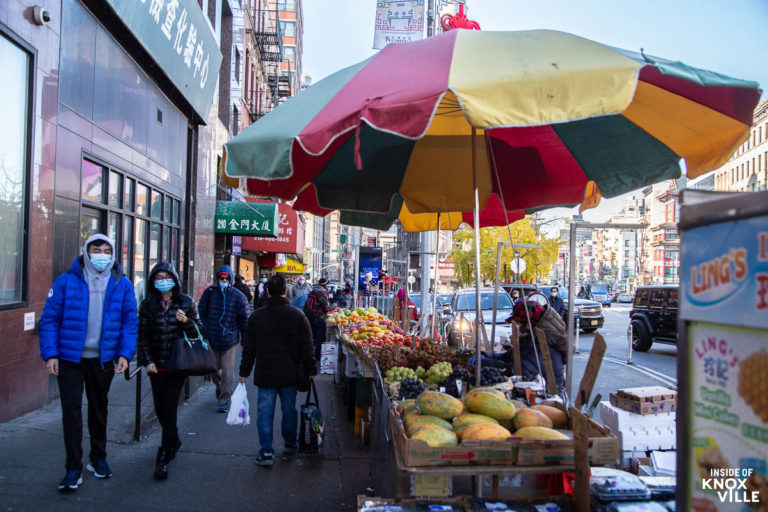 I do love the art and the buildings in New York City. I love the food and the music. But most of all, I love the street. I enjoy the people and the bustling sidewalks. I enjoy the unexpected oddities I discover there, never quite knowing what might lurk just around the next corner. I am forever amazed at how it all works, survives, and sometimes thrives. (If you missed any of the first three installments, you will find Dylan and Other Nerdy Parts here, Buildings and Art here, and What Seems Different here.

The starting point for our outside experiences on this trip was Washington Square. I have played chess there before and it was one of the first things I did on arrival on this trip. You can see the fear in the face of my opponent, no? Well, I came close to beating him. “I could’a been a contender!” The lovely lady in the background in her leopard skin coat interrupted several times asking for money and cigarettes. My opponent knew her and finally said, “We are trying to play chess, here!” and she backed off for a bit.

Panhandling was, indeed, alive and well as we walked around the city. It varied in intensity from one part of town to the other, but it was always present. A few minutes after this shot, a man approached us and asked for money as we crossed the square. After we told him “no,” he replied, “I ain’t gonna take no for an answer.” He apparently didn’t have a next move in mind, because that is exactly what he did.

We enjoyed piano music played on an outdoor grand piano (who does that?) and enjoyed watching a group of children play soccer. I wish I’d gotten a better picture of them. I suppose I could have included that photo with the first post because masked children playing in the square is certainly a new sight.

The gentleman in the photos above talked with us for quite a while. Frank was born and has lived all his life in the village. He was all into Irish roots, though when asked about his own, said, “Oh, I’m Italian.” His memories of the village go way back, though his only interaction he recalled with anyone famous was that he talked to Mary Travers once. He bartered the photo for a dollar from each of us to buy a cup of coffee.

The above scenes caught my eye for different reasons. The first is a look into the streets of Chelsea, which caught my eye. The fountain decorated for the holidays with boughs was a sweet touch. The colorful signs for food sales in front of Our Lady of Guadalupe at St. Bernard, with some people going into the basement for food and others entering for Sunday morning mass struck me.

The last photo above hits a particular thread and demographic in New York City. The line of people are waiting to get into Naked. Naked describes itself as, “A highly curated assortment of the most innovative, sustainable, and community-driven brands.” I don’t really like to shop if I can avoid it, so standing in line to do so would be a double negative. Then again, I doubt they curated that experience with me in mind.

Little Italy is smaller than it used to be. Other groups have taken over some blocks. There is enough there that makes for colorful pictures, but it was hard to avoid the feeling that tourists outnumbered Italians solidly. Still, we had some good food there and sat next to a table of lovely Italian women whose Italian words flew only as rapidly as they waved their hands through the air. We also went crazy and had a cannoli before lunch!

We also enjoyed a little time in Chinatown, which abuts Little Italy, just to the south. I was happy to see the live crabs were still on the sidewalk and sent a photo to Urban Girl to remind her of the crab that got after her at the same market in 2017. She was not amused.

We walked on a bit further south to Columbus Park where we found a fascinating musical performance that somehow melded Chinese music with a banjo and harmonica (or are they Chinese cousins?). The same park held probably two hundred Chinese-Americans playing a particular card game. We never quite figured out the rules, but it was fast, intense, and lots of money changed hands. Some tables used chips and others just handed out cash.

I’ll end with photographs of our walk through Soho and then a walk through the late-night streets of the village one final time. The trip started with chess and — except for one more cappuccino at Cafe Regio ended with chess.

Walking through a side street on the last night, we came across Chess Forum. Really not much more than a few hundred square feet with chess boards for sale out front. I saw them through the window and had to go in. Once inside, I noticed a small corridor filled with random boxes and tables and probably a dozen to twenty chess players. I asked about it and was told anyone can play — five dollars an hour.

It was only an hour later and well into our second game that I realized no one had asked vaccination status. I had reflexively removed my mask when I sat down and the room was filled with “You got nothing!” “Why you did that?” and similarly shouted smack talk. I slipped my mask back into place and realized playing chess may have been the most dangerous thing I did in New York City.

Thanks for taking the journey with me. Next up, we’ll return to talking about Knoxville.