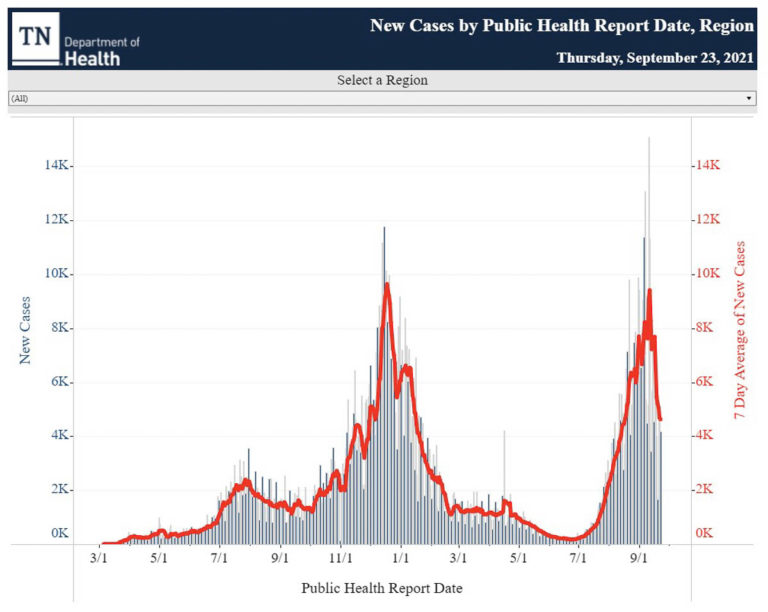 It’s Friday and to go along with that happy fact, there is quite a good bit of encouraging news this week at every level on the pandemic. For whatever reason or combination of reasons, this surge is diminishing. The state and local rates of infection and, particularly, deaths remain troubling, but there is indication those are improving more slowly. Longer term, the primary concern remains that millions of Americans have not gotten vaccinated, all but assuring future surges.

Not all areas of the world are seeing the declines. Brazil reported a 33% increase in cases over the last week, which continues that county’s tragic encounter with the disease. Additionally, numerous countries still have very high rates of spread, including Israel, which is concerning given their high vaccination rate, as well as Serbia, Mongolia, Cuba, the U.K. and others. For comparison, for all our high rate of spread in the U.S., we currently rank a modest 26th in new cases per million, well below the rates in these and other countries.

About 6.06 billion does of the vaccines have been administered, including about 250 million during the last week. The pace of vaccinations is back up after several weeks of significant decline, which included about 170 million vaccinations last week. Fifteen countries have now fully vaccinated at least 70% of their population, up two from last week. Another eighteen countries have reached at least 60%, up one from last week. The top five countries in the world for full vaccination rates are Portugal (84%), Malta (83%), U.A.E. (83%), Singapore (80%), and Qatar (78%).

Twenty-two countries have fully vaccinated less than 1% of their population, down from twenty-four a week ago. Most of these countries are in Africa. The countries in the world with the lowest vaccination rates all have rates below .2% and include Central African Republic, Benin, Haiti, Turkmenistan, Chad, Yemen, and Congo.

Over 43,532,000 cases of COVID-19 have been confirmed in the U.S. since the beginning of the pandemic. 703,000 deaths from COVID-19 have been confirmed. The U.S. leads the world by wide margins in total cases and deaths. In per capita comparisons among countries of at least 1 million in population, the U.S. currently ranks 6th worst in cases per million and 16th worst in deaths. This week the per capita death rate moved ahead of that for both Mexico and Croatia.

New cases reported this week (over 3,441,000) represents a17% decline from the week before. New cases are currently running about 126,000 per day, down from about 151,000 per day a week ago. This confirms the downward trend in cases which seemed questionable last week after a slight increase for those seven days.

The U.S. is now averaging 2,036 deaths per day, up slightly from the 1,969 we were averaging a week ago. If cases continue to fall, the assumption would be that we should soon see a decline in deaths. National hospitalizations have declined by 10% in the last two weeks, also indicated deaths should soon drop. States leading the country in per capita deaths this week were, in order, Alabama, Florida, West Virginia, South Carolina and Oklahoma. The states with the lowest death rates were Rhode Island, Vermont, Nebraska, New Hampshire, and New York.

The states with the highest rate of spread this week were Alaska, West Virginia, Wyoming, Montana, and Kentucky. In addition to having the highest rates for the week, all these states except Kentucky are continuing to see a rise in cases with Alaska seeing a 46% increase in case rates and Montana seeing a 66% increase over the last two weeks. In order, these states rank in full vaccination rates, 34th, 50th, 49th, 36th, and 26th, for an average of 39th.

The states with the lowest spread rates this week were Connecticut, Maryland, California, New Jersey, and Illinois. In full vaccination rates they rank, in order, 2nd, 7th, 15th, 6th, and 24th, for an average of 11th.

Just under 389 million doses of a COVID-19 vaccine have been given in the U.S., including about 17 million in the past seven days. The number of doses being given has declined in the U.S. over the last two weeks, from about 950,000 per day to the current 683,000 per day, which is about 92,000 fewer per day than the week before. 64% of Americans have gotten at least one shot, while 55% are fully vaccinated.

Fourteen states have fully vaccinated at least 60% of their population, up from twelve last week. Vermont, Connecticut, Maine, and Massachusetts, and Rhode Island lead in the percentages fully vaccinated, the same as last week, but with Maine passing Massachusetts. The lowest states remain precisely the same (starting at the bottom): West Virginia, Wyoming, Idaho, Alabama, and Mississippi.

The state of Tennessee is reporting 1,203,930 cases of COVID-19 and leads the country in per capita cases for the duration of the pandemic. 32,208 cases were added to the total over the last seven days, about 20,000 fewer than the week before. The average number of new cases per day is 4,626, down over 2,800 per day from a week ago. Last week Tennessee had the second-highest rate of spread in the country, but the rate has declined by 36% over the last two weeks and the state now has the 8th worst spread rate in the country.

Test totals rebounded a bit this week to close to what were typical numbers earlier in the pandemic, with over 21,000 test results reported yesterday. The 13.43% most recently reported positive test rate is about 5% better than that reported a week earlier and continues to improve, though it remains almost three times what we’d hope. The state dropped a spot this week to 36th in per capita testing since the beginning of the pandemic.

14,740 Tennesseans have died of COVID-19 during the pandemic, including 451 this week, up from 410 the week before. The 131 deaths reported on Tuesday represents the 12th worst day of the pandemic and the most since February 6 (203). Deaths in the state are averaging 64 per day, up from 59 per day a week ago. Average daily COVID-19 deaths in the state peaked on February 6 at 135 per day but fell to just 2 per day in mid-June.

Statewide COVID-19 hospitalizations continue to decline, after peaking at 3,831 on September 9. There are now 2,968 COVID-positive patients hospitalized in the state, down from 3,538 a week ago. 918 are in ICUs and 678 are on ventilator, down from 1,039 and 769, respectively, a week ago. Pediatric hospitalizations, which have seen a decline in recent weeks, did not decline this week, with 41 currently hospitalized, up by one from last week. ICU availability improved from 5% last week to 7% this week across the state, with 154 ICU beds currently available.

44.4% of state residents are fully vaccinated against COVID-19, while 52% have at least one dose, up slightly from last week’s 43.6% and 51.4%. The state ranks 43rd in percentage of residents fully vaccinated, down one from a week ago, as we were passed by Louisiana. The vaccination rate, like that in the country, has declined in recent weeks, with 100,400 having gotten shots in the past week, down from nearly 113,000 a week ago.

The governor understands completely the seriousness of the problem, and I think that hard decisions are being tempered by political realities, which is that he has an election next year,” said Dr. Richard Briggs, a surgeon and Republican state senator representing Knoxville. Dr. Briggs described the surge of cases in Tennessee as a “completely self-inflicted crisis . . .

Dr. Briggs said the governor is trying to cater to rural voters who have become increasingly hostile to health measures like masks and vaccines as a result of “the misinformation and disinformation” that they hear in conservative media. “He’s trying to walk this tightrope between doing what he knows would mitigate the effects of the disease, versus the political reality that it may be hard to win an election because of this radical group,” Dr. Briggs said . . .

“This is the byproduct of a long and frustrating battle with politics instead of professional health care,” ​​said Larsen Jay, a Knox County Commissioner, who in March was the sole Republican to vote against stripping the local health board of regulatory authority. Its powers were transferred largely to the county mayor, who has refused to issue any new pandemic restrictions.

“We have really competent and capable medical professionals that have given us the tools and a road map to end this pandemic,” Mr. Jay said. “But somehow we’ve given rise to people who research things on the internet and weigh that against people with 40 years of medical credentials.

The most stunning local news in the ongoing COVID-19 story over the past week came just over an hour ago when a federal judge ruled that Knox County Schools must implement a masking policy for all children and adults with no exceptions until a current case brought by parents whose children have disabilities is sorted out. It is effective immediately.

Today the KCHD is reporting 179 newly confirmed cases. Active cases have dropped significantly to 4,082, down from 5,850 a week ago. It’s the lowest number of active cases reported this month.

Test demand dropped by nearly significantly this past week, as well, falling from about 13,700 tests the week before, to about 9,500 the past seven days. The county’s positive test result rate remains very high at 20.2%, down only slightly from last week’s 22.5%. Turnaround time for test results has dropped to less than two days.

Hospitalizations have dropped in the 19-hospital central East Tennessee area, with current reporting indicating 621 COVID-positive patients, 170 in ICUs, and 127 on ventilators. These numbers are down from 715, 180, and 142, respectively a week ago. 23 ICU beds are now available in the region, up from only 8 a week ago. 61.2% of occupied ICU beds are occupied by confirmed or suspected COVID-19 patients.

The latest report from UT Hospital indicates 118 COVID-positive patients, down from 164 just a week ago. 82% of those hospitalized are not vaccinated and the average age of COVID-19 patients in the ICU is 52. Covenant Hospitals are reporting 314 COVID-positive patients, down from 356 a week ago, with an 92% ICU unvaccinated rate and an average ICU age of 56.

East Tennessee Children’s Hospital admitted 19 COVID-positive children over the last seven days, including 11 (0-5 years), 4 (6-11 years), and 4 (12-16 years). None of the four eligible for the vaccination had gotten it. As of the most recent report (Wednesday), ten remained hospitalized, with four of those in the ICU. This reflects an increase from last week, when eight were hospitalized and three were in the ICU.

The Knox County Schools are reporting 359 total active cases, including 326 students and 33 staff members. A week ago, they reported 442 total. The University of Tennessee is reporting 77 active cases, down from 157 a week ago.