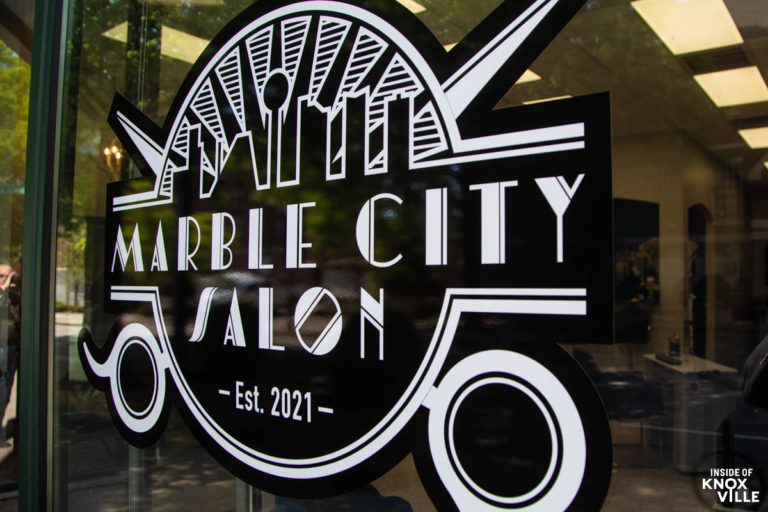 Melissa Hill has been working her way toward this moment for many years. After working in and around downtown for her entire career as a stylist, she has now opened her own business at 603 West Main Street in the Medical Arts Building. The new business opened its doors this week.
Melissa grew up in Clinton and moved to north Knoxville in 1993. She had two sons (she later had a third son) and when the second one was eighteen months old, she began study at Tennessee School of Beauty when it was located at Western Plaza. She attended class at night and took care of the little ones all day.

She says that Cecil Groce watched her work with clients, both her styling work and her interactions with them. When she graduated, he invited her to work with him at the Lion’s Den, which was in what is now the First Tennessee Building. She said she used old school tactics to get customers, handing out coupons on Market Square and in Garo’s Deli on the corner of Cumberland and Gay. She says many of those coupon customers are still with her.

One of her earliest clients was Andie Ray, who operated Vagabondia, a shop on Market Square. She said Andie would always come early and sweep the hair of the previous client. When told she did not need to do that, she said she simply loved to sweep. Another early client was local developer Joe Petre whose company helped her find her new shop. She said he told her years ago that if she ever decided to open her own business, he’d be happy to help her find a spot. He’s still getting his hair cut by her and was there when I arrived for photographs. She says her clientele is about an even mix of male and female.

She worked at the Lion’s Den for five years before following Bobbie Dun to Alpha Omega at a new shop on Church in the retail space of Pryor Brown Garage. She worked with her for sixteen years, as the business moved to the 700 block (where Knoxville Soap and Candle is today) and then to the Arcade Building. Two and a half years ago, she decided to operate as an independent contractor, renting a booth at Barnes and Barnes.

It was this experience as an independent contractor that helped convince her she could operate a business on her own. As she began the process of finding a place, she knew she wanted to stay downtown. She says she has worked hard to build a great clientele of about 250 and many of them walk from various locations downtown. She looked at the Medical Arts space and at other locations all the way through the Old City. She thought she might like to open at Emory Place, just to the north of downtown.

In the end, it was the Medical Arts space at 603 West Main Street that kept returning to her mind. She said that when she first saw it, she could immediately imagine how the business would be laid out. She first saw it on November 16 of last year and signed the lease on December 16. Work began on January 6.

I noted that those dates were all at the worst point of the pandemic and asked if that gave her second thoughts at any point. She said it had not and she felt like this was the time. She told me that she had driven to her client’s homes to cut their hair when the first lockdown was imposed. She opened for business on April 21 and response has been great. Old customers are making the move and new customers are making appointments, as well.

She’s joined by Samantha (Sam) Caldwell who will work from Wednesday through Saturday doing hair, color, and makeup, and Cynthia Brown who will join the business in May. Cynthia will be a nail technician. Melissa also trims beards and does a smoothing treatment for curly hair.

You will find hair products for sale including Lanza products for women and male products will soon be added. You’ll also find local art on the walls, including paintings by Suzanne Jack, photography by Bruce McCamish and (soon) at by Cynthia Markert. There is a possibility that Katherine Rouse, who owns Fizz at the same location Andie Ray once owned Vagabondia, will also offer jewelry for sale.

The shop is currently operating Tuesday through Saturday from 9:00 am to 7:00 pm. You can find and follow them on Facebook and Instagram and a webpage is in development.

Melissa ended by saying, “I’m very thankful for my downtown clients. They are the reason I am where I am today.”