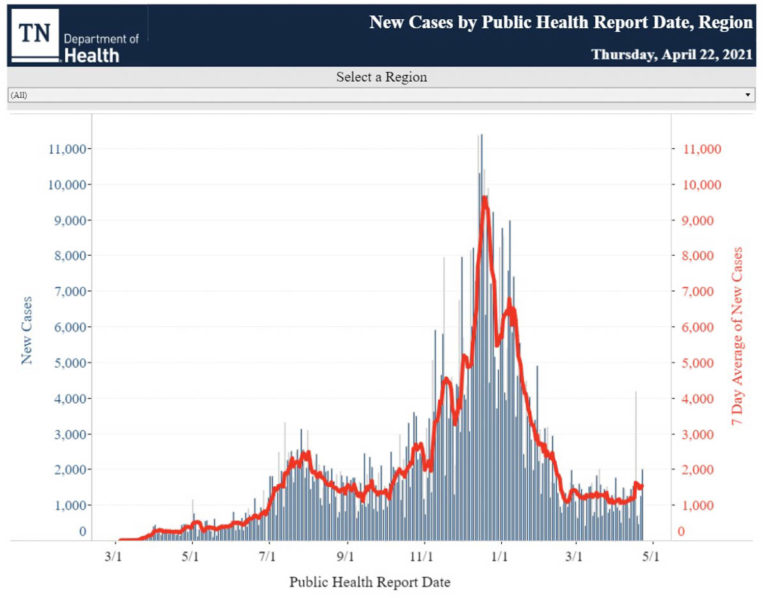 Today marks the resumption of the Dogwood Arts Festival. Registration was required and slots are filled. We are slowly approximating normal in many ways. Locally, we are currently experiencing a lower number of COVID-19 cases, though that is very much not true in other parts of the country and the world. Please be vigilant for just a bit longer. Please get vaccinated. Vaccinations are our path out of this long, long nightmare.

Over 145.4 million people have been diagnosed with COVID-19. 126.6 million people have recovered and there are 18.9 million active cases in the world. About 5.6 million additional cases were diagnosed this week, an increase in pace of over 500,000 from the previous week. The current average for new cases is 807,267 per day, the highest it has ever been and has risen by about 70,000 per day over the last seven days.

3.1 million people have died from COVID-19, including over 85,000 in the last seven days. Not only are the numbers of deaths continuing, but the rate of deaths is increasing, as well. An average of 12,194 people are dying from the virus each day, up about 600 per day from a week ago. The death rate is like that in early February.

Looking at yesterday as a point of comparison, there were 13,491 additional deaths reported, a number that has remained stable over the last several comparison points. It’s about 400 fewer than the number reported one week earlier. Brazil and India are now vying for the largest numbers of deaths each day from the virus. Yesterday, India led with 2,256.

With reported cases and deaths in Brazil declining, and India hitting new levels every day, it seems likely that in the next few weeks, deaths in India will dwarf those seen anywhere else in the world at any time during the pandemic. Other than the switch between India and Brazil, the five countries reporting the most deaths for the day are the same as they were a week earlier: India (2,256), Brazil (2,070), the U.S. (896), Poland (694), and Mexico (549). Of the five, only Brazil reported a daily number below that of one week earlier.

The current situation in India cannot be overstated. The country is establishing new international records for single-day case reports on a regular basis, with yesterday’s 332,503 cases the current international record. The massive wave of cases feared in the country from the beginning is now in full effect. The country reported as many cases for the day as the rest of the top ten countries combined and accounted for over 37% of all new cases in the world for the day. At over four times the U.S. population, its case numbers will likely eventually surpass totals in the U.S., which have been leading the world for most of the pandemic.

953 million doses of vaccine have been administered worldwide. Wealthy countries represent most of those vaccinations. The New York Times reports the following shot rates per 100 people for each of the continents: North America (42, but for the U.S. it is 66), Europe (25), South America (15), Asia (9.4), Oceana (4.5) and Africa (1.1). The gap continues to widen between North America and the rest of the world. Israel remains the world leader with 56% vaccinated, though that has not changed from last week. The U.S. has given more vaccines than any other country (about 21,9000,000), but ranks sixth for percentage full vaccinated at 27%.

Europe has determined to move forward with the Johnson and Johnson vaccine and shipments have begun. Germany has changed its law to allow the central government to shut down regions of the country which are most impacted by the virus. New restrictions are expected tomorrow. As is the case elsewhere in the world, restrictions are being protested there. Japan has declared a state of emergency in Tokyo and other cities as case numbers spike. Even while their need is debated, Moderna announced it will likely have a third booster shot available by late summer, intended to more strongly address variants.

An average of 64,204 cases per day were reported over the last week, down about 7,700 per day from the previous week. The decline in the last week is the first since mid-March and leaves current cases per day at similar levels to late last month, still about 9,000 per day higher than the middle of March but improving.

While the U.S. continues to lead the world in cases (32.7 million), India is closing the gap (16.4 million) and seems poised to possibly surpass the U.S. in coming weeks or months. Over the last seven days, India added over 1.2 million new cases compared to 500,000 in the U.S. The U.S. also continues to lead in deaths, but was that gap is also closing with India reporting over twice as many deaths (12.6 thousand) as the U.S. in the last week and Brazil reporting over three times as many (17.8 thousand).

Eighteen states are reporting increases in the rate of infections over the last 14 days. Eleven of those are reporting an increase of 10% or more in their rate. Five of the eleven are in the south. Yesterday, eleven states (including Tennessee) reported multiple thousands of new cases, down from twelve last week. Nineteen states reported at least 1,000 new cases, down from twenty each of the last two weeks.

Over the last week, the U.S. administered about 2.95 million vaccinations for COVID-19 each day. This reflects a decline from 3.35 million per day the week before. About 135.8 million people (41%) in the country have received at least one shot and about 89.2 million (27%) are fully vaccinated.

New Hampshire continues to hold the top spot for first vaccinations given (59%), with Connecticut, Massachusetts, Maine, and Vermont rounding out the top five. Maine leads in those fully vaccinated (35%), with the top five rounded out by Connecticut, Vermont, New Mexico, and Alaska. Tennessee is in a four-way tie with Georgia, Wyoming, and Idaho for 44th in first shots (33%), with Louisiana, Alabama, and Mississippi ranking worst. Tennessee is tied with Mississippi for 47th in those fully vaccinated (22%), while Utah, Georgia, and Alabama rank at the bottom.

The beleaguered Johnson and Johnson vaccine faces a new hearing today on whether or not to resume its use in the U.S., even as the CDC investigates a new death which may be related to the vaccine. Demand has dropped in the U.S. and some locations are now turning down doses, while some mass vaccination sites are closing.

813,791 cases are considered inactive, while 13,920 Tennesseans are currently positive for the virus. While this is up slightly (by about 200) from the same day the last week, active cases have remained in a range of 12,000 to 14,000 in the state since late February.

Hospitalization levels, which dropped to their lowest rate this year in mid-March, have slowly started to rise.  48 COVID-positive Tennesseans were admitted to the hospital yesterday, bringing the pandemic total to 20,905. There are currently 865 COVID-positive Tennesseans in the hospital, up from 793 a week ago. Of the 865, 262 are in ICUs and 127 are on ventilators, both also up from last week.

The state reported an additional 19 deaths from the virus yesterday, bringing the pandemic total to 12,130. The state is averaging 13 deaths per day, up from 10 per day a week earlier.

The Knox County Health Department reported 49 additional cases today, bringing county totals to 42,842 confirmed cases and 8,379 probable cases. Excluding last Saturday, when the large state data dump occurred, the county has averaged 36 new cases per day over the last week, down from 40 the week before. 49,821 cases are considered inactive in the county, while 773 county residents are currently confirmed positive for COVID-19. There are about 60 fewer active cases today than was the case a week ago.

There are currently 30 COVID-positive Knox County residents in the hospital, compared to 33 on the same day last week. The number has remained in the 30s for the most part over the last month. 1,376 Knox County residents have been hospitalized with the virus at some point during the pandemic.

The Knox County Health Department updated its metrics and the changes included shifting new cases from yellow to green and new deaths from green to yellow (ed. note: I wonder if this is an error on the website, or if I misreported it last week, as new deaths declined this week). Testing remains yellow, while public health and hospital capacity each remain green. For another way to measure where Knox County stands, see the New York Times page for our county. Our risk level remains extremely high for the risk of COVID exposure.

Active case numbers have risen slightly in the Knox County Schools and now number 55, up from 47 last week. All schools are offering in-person instruction. The University of Tennessee is reporting 30 total active cases, down from 38 a week earlier.