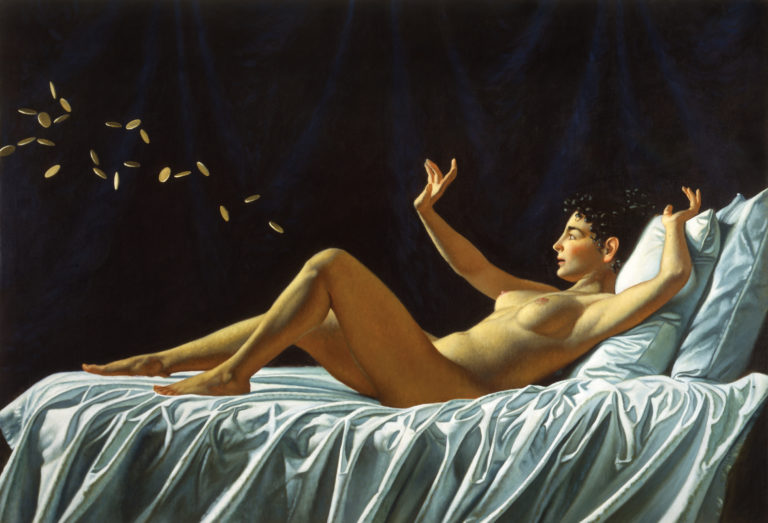 I recently had a conversation with John Kelley, a Knoxville and New York artist. We spoke by phone, he from what he calls his southern studio, the home he grew up in and inherited from his parents on Lyons Bend Road. He’s worked here since early last year. He left his Brooklyn home and studio for a visit here and decided to stay here through the pandemic that hit New York City so hard.

He’s excited that a second of his works has now been acquired by the Knoxville Museum of Art. He spoke of the great tradition of artists here, from Lloyd Branson and Catherine Wiley, to Beauford and Joseph Delaney. He spoke of the wonderful recent exhibition of the Delany works and the great accomplishments of the KMA.

But it all started for him in Knoxville. His mother’s family, the Kirby family, arrived in the area with a Revolutionary War land grant. The generations remained in the city and John’s mother married UT student Jack Kelley, from Alabama. He’d come to town to attend school and lived with a Knoxville artist and relative. He never left.

His earliest memory of recognition for his art and of realizing he may have a talent, was in kindergarten when he drew a picture of a monkey and his teacher “flipped.” He thinks maybe a “lightbulb” went off and he spent hours in detention through elementary school for drawing on test papers. He was sad to realize that art was increasingly de-emphasized in school as he got older.

He took art classes from an artist in a beautiful downtown home then located across from Knoxville High School. It was his first experience with oil painting and he describes it as very important to his development. His parents took him to the Parthenon in Nashville, an experience which sparked a love for Greek and Roman culture. He had an elementary school teacher who read Edith Hamilton’s Mythology all the way through to the class and it cemented his connection.

John attended Bearden Elementary, where he loved the old building, but switched to Webb in seventh grade, from which he later graduated. He credits that move with exposing him to art history classes he could not have gotten elsewhere. After obtaining an Art History degree from UTK, where he said the “classics department was excellent,” he attended Pratt Institute in New York in the early 1970’s. He described it as an “intense and thrilling,” if somewhat dangerous time to be in New York City, in which he “survived three or four gun-point muggings.” He misses the excitement a bit as Brooklyn has gentrified in recent years.

During his time at Pratt, he described himself as “very nerdy and a workaholic.” He said he made a list of things he wanted to accomplish. At the top of the list was to make a series of paintings that would be contemporary versions of ancient myths. He wanted the paintings to contain modern, accessible people, “like someone you might know.” He said art that simply tries to replicate a previous era is rarely successful, but that by using contemporary models, a tension is created between the modern and the ancient. One of his professors at Pratt, Al Laurens, brought in nude models once a week for students to paint and that was formative for John.

The institute is located in Brooklyn, which he describes as “shabby,” at the time. “My neighborhood was terrible,” he said, but that made it affordable and he stayed. He majored in Architecture, while taking all the arts classes he could schedule. After graduation he worked for a year at an architecture firm, but began taking portrait commissions in Knoxville and made enough money to quit the architecture job after a year to become a full-time artist.

He took classes at the Art Student’s League of New York, and immersed himself in New Figurative painting. He said the style, which focuses on the human form, wasn’t widely accepted at the time, though it has become more of a trend in recent years, with some figurative artists demanding large amounts of money for their work.

He describes the art scene as much more inclusive today, but says when he started the focus was more on abstract artists to the exclusion of others. He attended lectures by Ted Jacobs, a leader at the League, and still uses the notes today when he is called on to teach. He’s pleased to share a connection with another Knoxville artist, Catherine Wiley who also once studied at the Art Student’s League.

He kept a Brooklyn studio from that time forward and began working on that Greek Mythology series. In 2003 he visited the Parthenon, once more, meeting with Director Susan Shockley, in order to plan an education tour for a group of students. She ultimately invited him to have an exhibition of his mythology paintings in the museum there and the dream came full circle. He now has works in their permanent collection.

He produced a catalog of his work for the show and that was spotted by Jim Wells (whose reproductions of the works are the source for the photographs seen here). Jim is a talented local photographer and book publisher. After years of work, the product was a book of John’s work, Greek Mythology, Now, which was published in 2014 (and is available here). It features a linen cover, with an inlay from a brass template and sewn pages. John loves working with Jim, who he proudly notes, also attended Bearden Elementary School. Jim also published a book on Lloyd Branson.

In addition to his mythology work, John has continued to do portraiture. Vanderbilt University commissioned a portrait of Kate Lupton, the first female graduate of the University, which hangs there. He painted the official portrait of Bill Haslam as Mayor of Knoxville. His portrait of Bill Snyder, former Chancellor at UT and long-time organist at the Tennessee Theatre, hangs in the the theatre. His portrait of Alex Haley, painted late in Haley’s life, disappeared at auction after his death, but was later donated to the Tennessee State Museum in Nashville, where it now hangs.

He continues to paint, remaining in Knoxville, for now. He hopes to have a new edition of the book at some point, which would be expanded to include more recent works. If you are interested in purchasing his book, it is available at the link above on his website. He ships them himself and is happy to inscribe them. Also look for his work at the KMA.