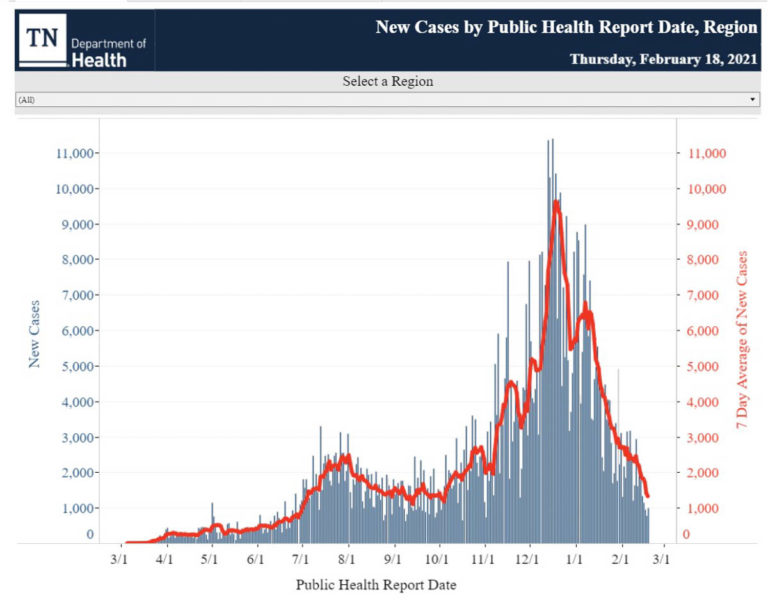 Happy Friday, everyone. I hope your week was a good one and you have some fun to look forward to on your weekend. Valentines is in the rearview. Our king cake has run its course, and the beads are put away for now. We may have seen the coldest weather we’ll get this year. The next week promises several days of warmer, sunny weather. Maybe a fresh beginning and new hope lurks just beneath the surface where the east Tennessee beauty is just waiting for its moment of release. Bring it on!

The state reported 998 new cases of COVID-19 yesterday, bringing state totals to 640,214 confirmed cases and 121,087 probable cases. It also marks the first time the state has reported fewer than 1,000 new cases for three consecutive days since early September. 731,791 cases are now inactive, while 18,453 Tennesseans are currently COVID-positive. This represents the lowest number of active cases in the state since October 11 (18,101). The seven-day average for new cases is 1,324 per day, the lowest since October 4 (1,174).

While deaths have dropped significantly in recent days, yesterday saw a spike to 72, which brings the state total to 11,057 since the beginning of the pandemic. Even with the single-day spike, the seven-day average continues to drop and has now reached 35 deaths per day. This is the lowest seven-day average since December 2 (32).

Continuing in the range established in the last several weeks, 10,515 tests were reported yesterday. The positive test rate of 8.34% is also in the range reported recently. It is much better than the rate just a few weeks ago but continues to hover around nearly twice the level most epidemiologists recommend. Johns Hopkins University reports Tennessee’s seven-day average positive test rate at 9.2%, up a half percent from the day before.

Unfortunately, the state vaccination rate continues to decline, with the state reporting just 112,868 vaccinations in the last seven days. The number had recently approached 160,000. To vaccinate everyone in the state by the end of this calendar year, 39,588 vaccinations would need to be given every day starting today. Every day that we instead vaccinate 5,535 as was reported yesterday, that number goes up.

The state reports 1,068,979 vaccinations have been administered and that 343,740 Tennesseans have gotten both shots. 10.36% of state residents have gotten at least one shot. The New York Times has Tennessee tied with five other states in last place with the fewest first dose vaccinations. In comparisons of states’ second dose administration, Tennessee is tied with Arkansas at 25th. At our current pace, Tennessee would vaccinate 100% of its citizens in the next 781 days, or by April 11, 2023.

The Knox County Health Department is reporting 86 new confirmed cases of COVID-19, bringing county numbers to 39,227 confirmed cases and 6,629 probable cases. This marks four consecutive days under 100 new cases for the county. The last time numbers that low were reported was from September 29 – October 5, when the county logged seven consecutive days under 100 new cases.

43,523 cases are now inactive, and 1,812 Knox County residents currently have active cases of the virus. It is the lowest active case count for Knox County since November 15 (1,618).

Current hospitalizations of COVID-positive Knox County residents increased to 65 today, up six from the day before. It continues a trend set over the last two weeks. After previously dropping rapidly from a high of just over 200 hospitalizations, beginning February 6, the number in the hospital has stabilized between 72 (2/6) and 58 (2/8).

Deaths continue at a slower rate, with one reported death today in the county. The person who died was between the ages of 65 and 74.

A final word on the KCHD wait list: You may get a call from an out of state number when it is your turn. They do not, apparently, leave messages. If you are waiting on their call, you might just have to answer all those car warranty and social security scam calls to make sure you don’t miss the legit call.

Active cases in the Knox County Schools dropped by nine to 132, including 102 students and 30 staff members. While 3,155 students and staff have recovered, 1,475 are in quarantine or isolation. While this number has been steady over the last several days, it is about 60% of its peak number in January. The number of students isolated or quarantined is 1,348, while the number of staff members is 127.

Metrics continue as they were yesterday and are as good as they have been since the beginning of the school year, with all metric green with the exceptions of custodial and substitute availability, each of which are yellow. No schools are currently on virtual-only learning because of COVID-19.

The University of Tennessee is reporting 87 active cases, up seven from yesterday. Interestingly, it is also reporting no additional cases for the day, so the two numbers must not be in sync. 328 are in quarantine or isolation, the same number reported yesterday. Included in the total are 67 employees, 188 residential students, and 73 non-residential students. 2,811 have recovered since the beginning of the academic year.

There are no additional clusters to report.

In today’s briefing, Dr. Plowman thanked students who have participated in the pooled testing program. Participation in the “required” program has been 64%. Residence halls which have reached 75% participation have had visitation restrictions lifted. The University will now begin contacting students who have not participated, reminding them that they agreed to do so as part of their housing contract.

Dr. Plowman discussed the most recent clusters, all of which are at sorority houses and, as she has before, stressed the clusters were because of living conditions, not because of social gatherings. She gave further details about each:

The close contacts above included all the residents of the sorority houses.