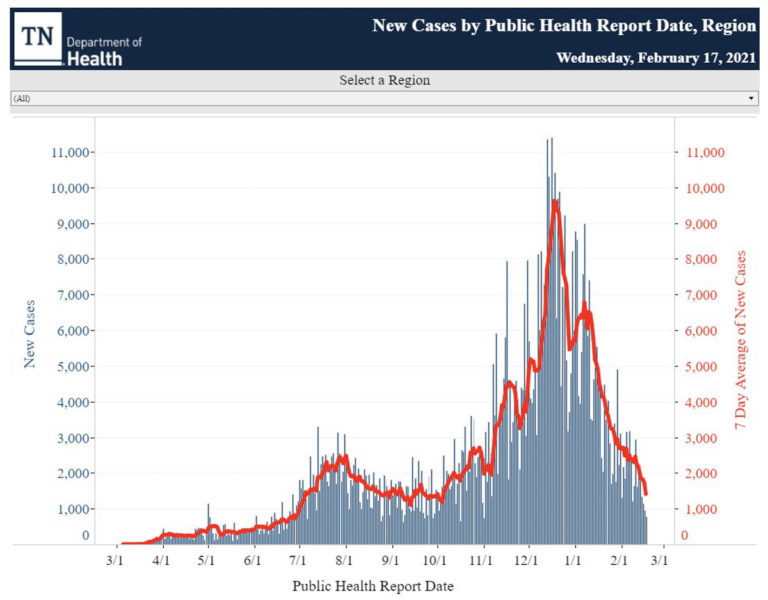 More cold, wet weather without snow. Sorry Old Man Winter, but if that’s what you’ve got, I’m ready to move on. Sunday looks nice and, of course, since we are in East Tennessee, after this week of nasty winter weather, we’ll hit the sunny 60s next week. I will look forward to spring for many reasons, but I’ll miss many of our usual downtown markers of spring. I walked outside a few days ago and something in the air immediately sprang Big Ears to my mind. Wouldn’t that be nice about right now?

The number of daily cases reported by the state of Tennessee continues to decline rapidly. After the previous day set a new post-November 1 low at 962, the state reported 780 yesterday, still just over the November 1 number (754). State pandemic case numbers have now reached 639,607 confirmed cases and 120,696 probable cases.

57 Covid-positive Tennesseans were reported hospitalized with the illness yesterday, bringing the pandemic total for the state to 18,120. Even though hospitalizations are much lower than six weeks ago, the number hospitalized has risen slightly for two consecutive days, something it has not done since the beginning of January. The current total is up ten to 1,133. The number of ICU patients (305) and ventilated patients (167) continues to drop slowly.

Testing continues at a very low level, but the positive test rate is also remaining much lower than we’ve previously experienced. Just over 7,900 tests were reported yesterday, with the pandemic total just over 6.6 million. Johns Hopkins University reports Tennessee has averaged 8.7% over the last seven days, a rate last seen in the state in early November.

The state reports 1,054,418 total shots have been given of the vaccine, with 8,241 given the day of the report. For the last seven days, the state is reporting 123,475 shots were given, a drop of about 17,000 from the previous seven-day rolling period. 10.24% of state residents have been given at least one shot, while 339,407 state residents have gotten both vaccines.

At our current rate, the state could be completely vaccinated 716 days from today, or by February 4, 2023. A week ago the projection was July 24, 2022, meaning our pace has slowed enough that it would take an additional seven months.

After missing yesterday’s report, the Knox County Health Department is reporting 49 cases for yesterday and 78 for today. It brings case totals for the county to 39,141 confirmed cases and 6,579 probable cases. 43,353 cases are inactive, and 1,847 people currently have an active case of the virus. This represents the lowest active case number reported since November 15 (1,618).

A total of 59 COVID-positive Knox County residents are currently hospitalized, bringing the total number to 1,214. The hospitalization number has been relatively stable for the last ten days or so, with the number hospitalized ten days ago identical to today.

The state is reporting a 16.4% positive test rate for the county over the last seven days. This number is higher than it was a week ago and underscores that our improvements are precarious.

Charity Menefee led today’s briefing and thanked the public workers who ensure the roads are clear for county residents. She said vaccination clinics continue this week and eligibility expands to teachers and people 65 and over starting on Monday. She pointed out that eligibility does not necessarily mean access, as demand continues to far out-strip supply. She pleaded with people to call the health department to remove their names from the wait list if they get their shots elsewhere.

She said the delay in data yesterday due to some probable cases on one particular day being coded as confirmed cases. They took the day to sort it out and make sure it was accurate. She confirmed the numbers above. Cases dropped during this period to about 120 per day from 127 the previous period. She said we need to not become complaisant, as the numbers remain high.

She said testing rates have dropped, but the hope is this reflects a lower rate of spread. Lab turnaround time is less than two days. She said vaccinations are heading in the right direction. Regarding deaths, she said 32 deaths occurred in the last fourteen days and is trending in the correct direction, but remains high enough they still consider it to be red.

Metrics for the system look about as good as they’ve looked in a while, with teacher attendance, student attendance, cafeteria support, and bus service all rated green, while custodial remains yellow and substitute availability has risen to yellow, which is rare. No schools are currently all-virtual due to COVID-19.