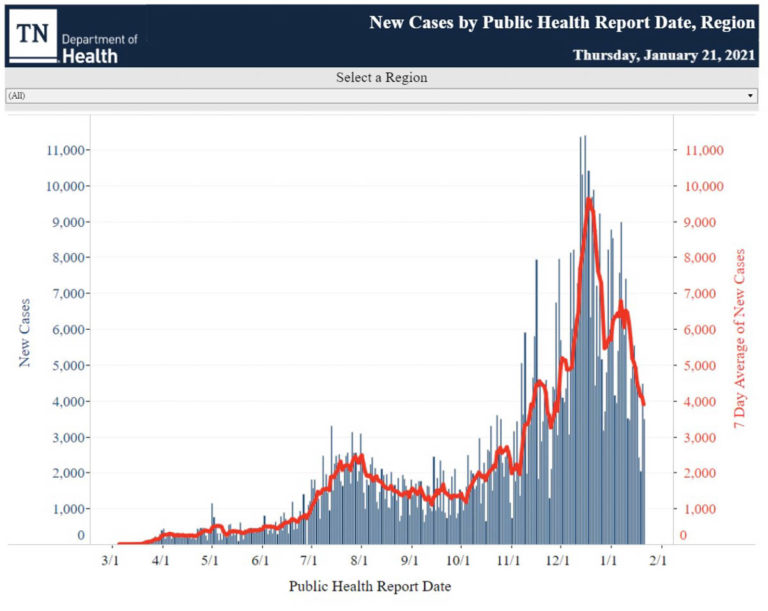 Urban Boy is making his presidential plans. His kindergarten teacher has done an amazing job teaching five-year-old children about MLK, Jr. and then the inauguration and the U.S. political system. I’ve found a tremendous respect for what those teachers do with this age group. I wish they were respected by our state government, but that is another story.

Urban Boy was tasked with saying what he would do if he was president. Of course, given the incredible exertion of his young life, his default was that he would “rest.” While that might be preferable to doing actual damage, it may not be a fully developed plan. Pushed a bit, he said he’d give homes and food to the people. Not a bad platform, after all.

The state reported 3,492 new cases of COVID-19 yesterday. The new cases bring the totals to 595,776 confirmed cases and 102,077 probable cases. 639,444 people have inactive cases, and 49,655 Tennesseans have active cases of the virus. As diagnoses of new cases has dropped, so too are the number of active cases. The seven-day average for new cases in Tennessee is 3,900 per day.

Daily hospital admission data was not updated overnight, as is the norm. The number of COVID-positive patients currently hospitalized continues to plummet, with 2,509 currently in Tennessee hospitals, as compared to over 3,300 just over two weeks ago. 667 COVID-positive Tennesseans are currently in ICUs across the state, and 405 are on ventilators. These numbers also continue to decline, though more slowly.

128 deaths from the virus were reported yesterday. 8,684 Tennesseans have died of COVID-19. Deaths have averaged 65-per-day in the state over the last seven days. While the death rate has declined from a peak of 109 just over a week ago, the decline is not as clear as the decline in cases. The rate increased by seven deaths a day yesterday over the day before.

Testing in the state appears to have leveled off at about 40% to 50% of the rate seen before the holidays. Just short of 23,000 tests were reported yesterday, bringing the state total to just over 6.1 million tests since the beginning of the pandemic. The best evidence that the low case numbers are not simply a result of low testing numbers, however, is that the positive test rate has dropped dramatically to 13.17% reported for yesterday and a 16.1% rate over the last seven days.

State totals for vaccninations have not been updated, with 370,895 the last reported total for vaccinations in the state (1/18). At the current pace, Tennesseans could be 100% vaccinated by September 19,2023. The reality is starting to be acknowledged, with the state admitting it anticipates receiving half as many vaccinations in January as it received in December, anticipating a total of 185,000 for the month.

In yesterday’s webinar, the state said it will stick with the policy of vaccinating those over 75 before moving to younger groups. State epidemiologist Cassie Jones indicated the expectation for February is not much higher than for this month. She said the prospect of getting vaccinations via pharmacies and doctor’s offices could be months away. The state is set to “update” its vaccination plan later today.

Tennessee State Senator Ed Jackson confirmed that he has tested positive for COVID-19. He attended and participated in the first full day of the current legislative session, presumably while waiting on his test results. The state legislature does not require legislators to wear masks.

The Knox County Health Department reported 115 additional confirmed cases of COVID-19, along with 59 probable cases, bringing the totals for the county to 35,841 confirmed cases and 5,137 probable cases. According to the state website, the county is now averaging 287.7 cases per day over the last fourteen days. 37,168 cases are considered inactive, while 3,379 Knox County residents have active cases of the virus. This represents the lowest number of active cases in the county since December 12.

Hospitalized COVID-positive Knox County residents also continues to decline, with 127 reported today, down from 135 yesterday and from over 200 earlier this month. Two additional deaths were reported, but five deaths were removed from recent totals as individuals previously included were determined to be residents of other counties.

The state reports a 17.7% positive test rate for the county over the last seven days.

1,000 additional vaccinations will be given on Saturday by the health department. The appointments filled in six minutes after becoming available via the KCHD website. The unfortunate reality is that if we gave 1,000 each day, as opposed to once or twice a week, it would take nearly 20 months to vaccinate the population of Knox County.

The Knox County Sheriff’s Office issued a statement of condolence on the death of 37-year-old Sarah Stidam, the wife of a KCSO patrolman. The department spokesperson said the department has lost three current or retired officers to the pandemic.

Metrics for the system remain unchanged, with all being green with the exceptions of custodial staff (yellow) and substitute availability (red).

The COVID-19 numbers continue to trend slightly upward for University of Tennessee students and staff as they return to classes. The university is reporting 73 active cases, up from 69 the day before, though still extremely low for the population of the school and relative to the surge seen at the beginning of last semester.

Isolations and quarantines have also gone slowly upward this week, now at 209, up from 191 the previous day. Of the 209, the majority are off-campus students (112), while 40 of the total are on-campus students and 57 are faculty and staff.

Dr. Crawford led today’s briefing, joined by Dr. Gregg and Dr. Cuevas. She noted that they are getting reports from students and parents of students who are not following guidelines set out by the university and reminded them they must do so. She reminded that there is no dorm visitation, carry-out only meals and social gatherings are limited.

Dr. Gregg reported that there has been an increase in cases as they would have anticipated. He said the hope is to avoid a surge like the one seen in the fall. He pointed out that strains which are more readily transmitted mean core safety behaviors are even more critical. He encouraged students to contact the health center via phone for screening and tests. He said those who have no symptoms, but feel they may have been exposed, are free to pick up a self-test kit.

All on campus students are required to participate in pooled saliva testing and that program was further delineated. 1900 samples have been taken this week, resulting in 13 referrals for testing. The university hopes to expand to about 8,000 samples per week, which would include some off-campus students. Participation rate has been high in the first few days.