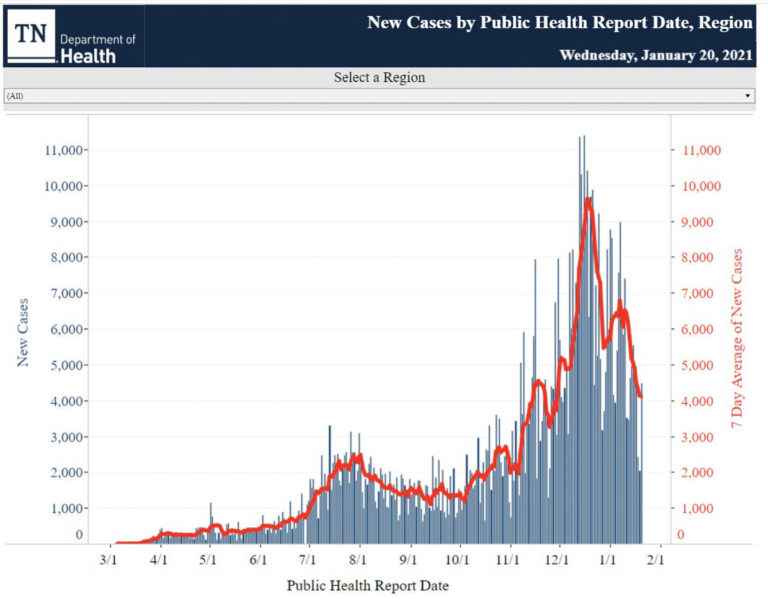 Urban Boy has announced his primary career ambition is to retire. He said that way he can lie on the couch and watch tv or do whatever he wants. It sounds a whole lot like the last year of his life to me, but I won’t judge his goals in life. He did forget to mention having foot servants to do his laundry, cook his food and tuck him in, but I suspect those parts are assumed at this point. I hope you are all doing as well as Urban Boy and similarly making your plans.

The same trends that have emerged in recent days in the state continue, with declining cases and hospitalizations. Testing also continues to be reported at a low level, though it nearly doubled from the day before. This brings it up to about half of a normal day in December.

The state reported 4,483 new cases yesterday, bringing the totals to 593,314 confirmed cases and 100,977 probable cases. 633,428 cases are considered inactive and 52,307 Tennesseans are currently COVID-positive. The number of active cases has dropped about 40% in the last month. The state is averaging 4,414 new cases each day, the lowest that number has been in nearly two months.

An additional 99 COVID-positive Tennesseans were hospitalized yesterday, bringing the pandemic total to 16,233 during the pandemic. 2,653 are currently hospitalized, continuing the relatively quick, steady decline seen for more than two weeks in the state. The current number is the lowest since December 12. ICU and ventilator numbers have also dropped, though more slowly. There are currently 721 COVID-positive Tennesseans in ICUs and 413 on ventilators.

If current case numbers are reflective of the spread of the virus and it is truly dropping, we should continue to see a significant decline in deaths. The state reported 86 deaths yesterday, bringing the pandemic total to 8,556 Tennesseans who have died of the virus. The current seven-day average for deaths is 56, down from 109 just eight days ago.

Reported test levels, as stated above, nearly doubled from the day before, from less than 12,000 to just under 22,000 for the day. Again, 40,000 and 50,000 tests per day were common in November and December. This would be more of a concern if it were not for the positive test rate, which continues to rapidly decline, suggesting the drop in cases may be real if confounding. For the day, the state reported a 13.92% positive test rate, while John Hopkins University reports an average of 16.8%.

There are no new updates on state vaccination totals. As of 1/18, the state reported 370,895 total vaccinations given (including first and second doses), with 6,333 the previous day and 95,696 for the most recent week. At this rate 100% of Tennesseans would get the shot 971 days from now, or September 19, 2023. Here’s hoping something can change dramatically to speed up production, delivery and administration. The current pace will do little, if any, good.

When the state reports an increase or decrease in testing numbers on a given afternoon, Knox County will report a similar increase or decrease in new case numbers the following morning. As the state nearly doubled reported testing yesterday from the day before, the Knox County Health Department reported 196 new cases today, roughly double the 85 reported the day before, though still well below numbers reported in December.

The new cases bring Knox County’s total numbers to 35,706 confirmed cases and 5,078 probable cases. Of these, 36,800 are considered inactive, while 3,570 Knox County residents remain COVID-positive. The state website reports a 312.7 average number of daily cases for the county over the last fourteen days, down from 374.1 the prior fourteen-day period.

There are 135 COVID-positive Knox County residents currently in area hospitals, bringing the pandemic total to 1,066 who have been hospitalized since the beginning of the pandemic. After declining rapidly from the high of 205 on January 5, the decline seems to have slowed.

Deaths continue to show the worst trend, though it is important to remember that the number of deaths cannot decline until two weeks or more after cases and hospitalizations decline. The fourteen deaths reported for the county yesterday represented the worst single day of the pandemic.

Today’s total of eleven is also one of the worst and the two days together represent the worst two days of deaths for the pandemic. There have been 110 Knox County deaths from the virus in the month of January, with ten days remaining, worse than any other complete month except for December, in which 157 died. The high case counts in December dictated the deaths we are seeing now.

The state is reporting a 17% positive test rate for Knox County. Local vaccination number have not been updated. To my knowledge there have been no announcements of new vaccine received by the health department this week, which is concerning.

Charity Menefee chaired today’s meeting and thanked the community partners who are helping the health department reach out to vulnerable populations. She said over 4,200 doses of the vaccine have been administered and the remaining doses scheduled. An additional shipment was received today and, as a result, there will be a vaccination event on Saturday, with sign-up starting tomorrow at 11:00 am. They are still vaccinating the first group, including those 75 years old and up. She said the county is the fourth leading county in the state for vaccination numbers.

She confirmed the above numbers and reviewed the benchmarks (covered yesterday). She said testing had dropped during the most recent period and that is a concern. She said lab turnaround time is decreased to just over 2 days. She repeated what Dr. Gray said on Tuesday, that while hospital numbers have dropped, the census numbers remain abnormally high.

The Knox County School system is reporting 231 active cases among students and staff, up slightly from the 223 reported the day before. The number is off the pandemic high of 274 reported a week earlier. Included are 169 students and 62 staff members.

2,420 are considered recovered, while 2,281 are in quarantine or isolation. The number reflects a jump of over 200 from the previous day but remains well below the 2,700 reported a week earlier. Of those in isolation or quarantine, 2,074 are students and 207 are staff members.

As would be expected with students back on campus and testing underway, an increased number of active cases are being discovered. The university is reporting 69 active cases, up from 51 the day before. 2,521 students and staff are considered recovered, while the number in quarantine or isolation grew from 168 to 191.