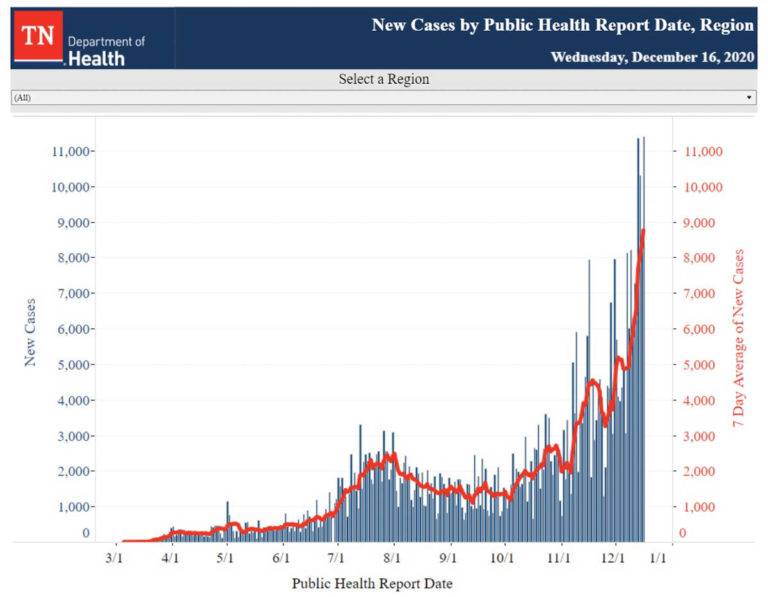 Do you know that the city sparkles when it is wet? The reflections of the lights off the wet street double the delight. It is especially true at Christmas, with more lights than usual strung in every direction. This would be a great year to pack the family into a car and cruise through the city. While you are at it, there are numerous neighborhoods bespangled for the season. There is even an official city guide to some of the best spots. Grab some hot chocolate, heat up the car and cruise through the festivities. It’s on my radar for our family this weekend.

Unfortunately for Tennessee, another day brings another record, this one for cases. The state reported 11,410 new cases yesterday, just topping the record of 11,352 set just three days earlier. The state is averaging 8,761 new cases per day. For the day, the state reported the fourth highest total of new cases in the U.S., surrounded by much more populous states such as California, Texas, Florida, Pennsylvania, and New York.

An additional 105 COVID-positive Tennesseans were hospitalized, bringing the pandemic total to 13,437 in the state. A new record of 2,876 are currently hospitalized with the illness. 727 are currently in state ICUs and 365 are on ventilators, each also pandemic records. 88% of hospital beds in the state are in use, as well as 91% of ICU beds.

The state reported 53 additional deaths yesterday, bringing that total to 5,668 Tennesseans who have died of the virus. The state is averaging 71 deaths per day over the last seven days.

The state reported 57.8 thousand tests for the day, with a positive test rate of 17.75%. It is worth noting that on the day we reached the previous record of almost as many cases as today, over 84.6 thousand tests were given. Johns Hopkins University is reporting a 17.5% average positive rate for the state for the last seven days.

In other state news, Governor Lee’s comments from yesterday were reported on CNN. From the article:

Decisions people made over the Thanksgiving holiday is having a severe reality on the hospital system across the state, Lee said.

“One thing this vaccine will not solve, or cure is selfishness or indifference to what is happening to our neighbors around us,” he said. Lee also added the vaccine is not a cure for foolish decisions on how we gather, or one’s refusal to wear a mask and it won’t cure the idea that someone else’s decision won’t impact another person’s life.

The Knox County Health Department is reporting that new cases for the day have crossed 500 for the fourth time today. Each of the four days have fallen in the last five days and the fifth day (yesterday), just missed the mark at 472. Today, there are 527 new cases, bringing the county totals to 25,263 confirmed cases and 1,886 probable cases.

There are currently 127 COVID-positive Knox County residents in the hospital, bringing that total to 691 since the beginning of the pandemic. The high mark was 146 set on December 10. As reported yesterday, with the weekly benchmark update, there are 25 adult ICU beds available in our region.

The health department also reported an additional three deaths of COVID-19, bringing the pandemic total to 237 in the county. Two were of people ages 64-75 and one was of a person 75 years or over. I mentioned in my previous article a discrepancy between the number of deaths for the month that I was reporting at the time (67), and the number that Charity Menefee reported (51). I asked the health department for clarification.

Charity was reporting from the death data on the website listed by date and updated the day before with the benchmarks. That data did not include yesterday’s 11 deaths. Additionally, after reporting the deaths to the public, the health department then sorts out precisely which day the people died. I was told this morning that a death they learn of and report today could have happened as much as a week ago. I assume the remainder of our discrepancy (5 deaths) were reported early in the month and were later attributed to the last days of November.

I will continue using the day of report for my statistics, as they are provided on a daily basis. Given that, our total for the month is now 70 deaths, already the county’s worst month, with two weeks remaining.

In other news, as the Knox County Commission seems to be moving toward removing regulatory power from the Board of Health without, to my knowledge, making any moves of its own to deal with either health or economic impacts of the pandemic, others are seeking solutions. A roundtable discussion was held yesterday, which included local hospital leaders, with the goal of better informing locally elected officials of the issues.

The Knox County Commission meets on December 21 to take up the measure. If you would like to email the commissioners, you can do so with one email to all here. Anyone wishing to speak at public forum needs to call the Commission office by 4:00pm this Friday to be added. The number is 865-215-2534.

Additionally, the Knox County Board of Health last night passed a resolution asking the governor to put in place a mask mandate. This has been requested by groups ranging from doctors across the state as far back as July, all the way to the White House Task Force, which recommended it in October and continues to do so, though to no avail. Perhaps this will be the moment.

Katherine Killen, chief strategy officer for the KCHD, chaired today’s meeting and thanked the delivery people who are delivering vaccines across our area. She encouraged people to get their information about the vaccination from reliable sources such as the TN Dept of Health, CDC and your medical provider.

She presented a graph showing a surge of new cases following holidays. She discussed how much cases have surged since Thanksgiving and pointed out there is no time for them to level off before Christmas. She pleaded with people to avoid gatherings, wear masks, and keep distance between yourself and those outside your household.

She reviewed today’s numbers (reported above). She also reviewed the benchmarks, all of which remain red. This period included a record number of cases, hospitalizations, and deaths. Test results are taking six days on average. Contact tracing for all cases is no longer possible.

The number of active cases and quarantined or isolated students and staff in the Knox County Schools continues to decline as it appears no cases are being added with schools meeting virtually. Today’s reported numbers include 186 active cases (down from 188), and 1,924 in isolation or quarantine (down from 1,925).