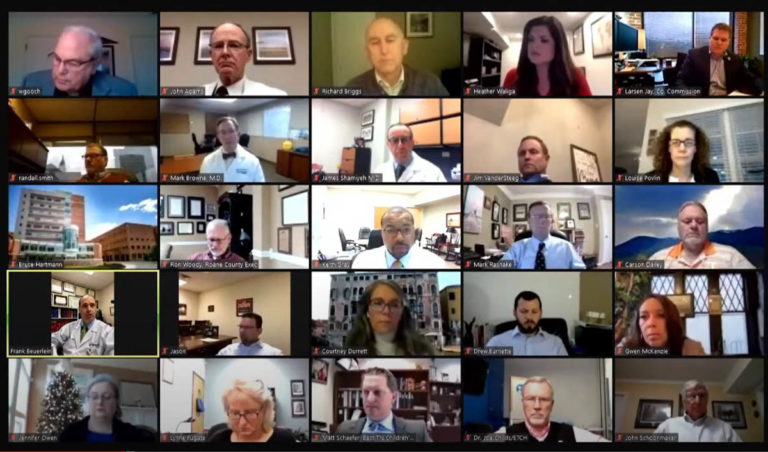 State Senator Dr. Richard Briggs (R-Knoxville), Knox County Commission Chair Larsen Jay, Knoxville Vice Mayor Gwen McKenzie and Farragut Vice Mayor Louise Povlin were joined by local hospital leaders in a round-table discussion of the region’s current situation and the impact of the pandemic with an eye toward how we might move forward. Here are some highlights.

Dr. Shamiyeh presented the current data (charts will be included with the Board of Health meeting article). He focused on the regional hospital situation. Eleven counties are included in the district and all hospitals within the district act cooperatively. The counties include Knox, Sevier, Blount, Grainger, Loudon, Hamblen, Union, Anderson, Cocke, Claiborne, and Campbell.

He began by showing the increases by week and month and made the point that the region has surpassed its numbers from November, the previous record. He broke down the number of cases by region and east Tennessee leads, with only Davidson County close, despite their larger population. New cases are crossing all ages, but are being driven by people over 50, the group more likely to need hospitalization.

Looking at the current patients at UT, there were representatives of all age groups both in regular rooms, as well as the ICU, though larger numbers are from all age groups. He said the positivity rate is running at or over 20%. The post-Thanksgiving spike has begun, and region-wide numbers are moving up as rapidly as they have at any point and are at records.

Dr. Beuerlein and Dr. Grey co-presented information about the hospital situation. Dr. Grey emphasized how closely all the hospitals have worked together from the beginning. Noting that procedures were limited early in the pandemic, he said they don’t want to go back there. The current restraints are facilities and staffing. He said there are currently over 500 COVID patients in the region, with 25% in ICUs and 60% of these on ventilators. He said the stays tend to be longer for COVID, further straining bed capacity and that all ages are being hospitalized, but those over 50 are more likely to be in an ICU and those over 60 are more likely to need a ventilator.

Dr. Beuerlein reiterated the issue of caregivers. He said there is a shortage locally, as well as a shortage of traveling caregivers. They have hired more of each. He said they have tried to increase and store supplies in anticipation of this event. He expressed concern about the current local blood supply. He said they are coordinating where patients are taken and have had to transfer some to maintain care. He said the workers are stressed. He said we are fortunate that our incidence of the virus was low in the early months giving us time to harvest plasma and to develop new helpful drugs.

Dr. Browne spoke to the issue of where we are headed. He said his definition of “the future,” has changed to “what are we going to do tomorrow?” He said early on there were many models trying to predict the pandemic but have proven to be helpful only about two weeks into the future. He said many of the people in the roundtable meet five days each week to discuss hospitalization resources. He said he feels the cooperation that has grown out of this will serve the community well in the future.

He said the vaccine will not help for some time and that it will be more like a dimmer switch than a toggle switch. He also thinks the advances made in medications, telemedicine and other areas, this pandemic will change the way things happen going forward even after the pandemic and for illnesses other than COVID-19. He emphasized that we could impact the future and he feels we have, by practicing the five core actions. He also said he would add a sixth: When it becomes available, get your vaccine.

Dr. Childs discussed the impact of COVID-19 on children. Noting it is not as severe a disease among children, though they can get it and spread it. He said about 30 have needed to be hospitalized during the last several months and a few have become severe. He mentioned MSIS can develop weeks after a mild case and can impact heart and lung function. He said that has been seen here, particularly in a cluster after Thanksgiving.

He further discussed the non-medical impact on children including isolation, family changes, academic changes. He said emotional and mental health concerns have increased among children. He said it is approaching “disastrous proportions.” He said these needs are going to be significant going forward. He expressed hope regarding the vaccine but said things may get worse before they get better.

Dr. Beuerlein discussed the five core actions, saying they are not perfect, but if all are practiced together, it helps tremendously. He noted that places with mask mandates have far lower hospitalization rates. He said the masks also seem to be helping with flu numbers for the area. It’s about 40% lower than it would be at this time and that helps shift resources toward helping with COVID patients.

Dr. Adams spoke about the vaccines. Some supplies are expected tomorrow, with vaccines to start at 6 am on Friday. He said the vaccine will help, but it is going to be a long climb. He said the vaccine has not been rushed, but the speed has resulted in changes in investment, technology, supply chain improvements and more.

He said there is a lot of “misinformation and myths” regarding vaccines and he urged people not to get their information from FB. He said he will literally be first in line at his hospital and he will be happy to be there. He said he knows it is difficult to maintain the five core actions, but it is critical.

Dr. Rasnake reported that he just learned he had received an active vaccine as a part of the trial in late summer. He said he felt confident then but feels even more confident now and will happily offer the vaccine to his staff and family. He said at UT, some staff members will receive it tomorrow. He said there will be some allergic reactions and those can be treated. He said there will be side-effects, such as feeling fatigued for about twenty-four hours. The 95% efficacy is virtually unheard of for respiratory illness.

He emphasized the five core actions are working, but they are not high enough. He said the combination of continuing those behaviors and the vaccine may get the transmission rate dropping quickly. At that point, it is important to continue to be careful, at least until we reach 70% or so of the population getting the vaccine.

Dr. Adams said we don’t yet know how long the impact of the virus will remain, but data are suggesting vaccine immunity may be much longer lasting than natural immunity produced by having the illness.

Questions were taken before hand from some present as well as in chat:

At that point, the feed I was following stopped working and when it was loaded to Youtube, it ended in the same place. You can watch the video below: