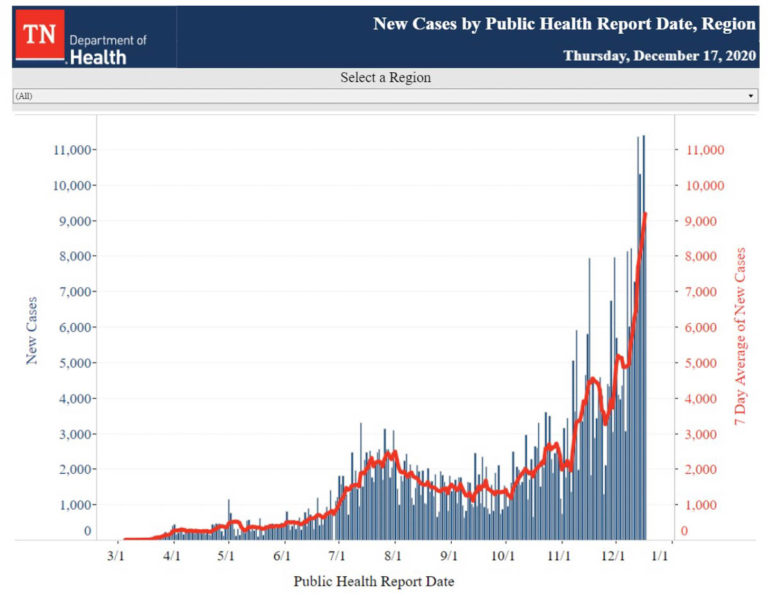 Happy Friday! It’s Keith Richard’s birthday. Maybe we should be researching his blood for vaccine possibilities? Meanwhile, local musician and general fine human, Mike McGill has his 8th Annual Mike McGill Christmas Spectacular tonight starting at 8:00 PM. Usually at Barley’s tonight’s event, in keeping with the times, will be broadcast via FB Live to raise money for Second Harvest Food Bank. Join in for some great local music and to support a good cause – and make plans to catch it live next year! I hope to put out a few more ideas for seasonal fun, perhaps as early as tomorrow, so watch for that.

The state of Tennessee reported 8,945 new cases yesterday, bringing the state totals to 444,105 confirmed cases and 49,125 probable cases. 418,724 Tennesseans are considered to have inactive cases while 68,661 have active cases. Over the last seven days, the state is averaging 9,179 new cases each day.

In a trend that is becoming more common, the numbers for new hospitalizations each day is often reaching triple digits. 100 additional COVID-positive Tennesseans were admitted to the hospital yesterday, bringing the pandemic total to 13,537. The total currently hospitalized has reached 2,897, while 754 are currently in ICUs across the state and 388 are on ventilators. Each of the three numbers represents a new record for the state. 12% of statewide hospital beds are currently available and 8% of ICU beds.

The state also reported a record 177 deaths for the day from COVID-19. The previous record, 100, was set ten days earlier. For the last seven days, the average of daily deaths from the virus is 86, the highest it has been at any point during the pandemic.

About 32.9 thousand tests were reported yesterday, down considerably from recent days, but in the high-average range for the state. For the day, the state reported a 21.5% positive test result rate, more than 4 times higher than the level considered to reflect an adequate level of testing. Johns Hopkins is reporting a seven-day positive test average for the state of 18.1%.

The Knox County Health Department reported 401 new confirmed cases for the day. It marks six consecutive days over 400 new cases and brings the county’s totals to 25,664 confirmed cases and 1,979 probable cases. Of these, 22,887 people are considered to have inactive cases, while the 4,569 active cases establish a new record high for the county.

The state website reports Knox County’s positive test rate at 19%, with a daily average of just over 2,600 tests given.

The Knox County School system does appear to be updating its site with new cases, meaning I’ll continue the updates through at least Monday, before taking a break from those numbers for the holiday. I’m not convinced they are getting as much information as was the cases when students were in person but, clearly, they are adding cases.

The system is reporting 201 active cases, up from 186 yesterday. The 201 includes 105 students and 96 staff members. 1,457 students and staff are considered recovered, while 1,949 are quarantined or in isolation. Of these, 1,718 are students and 231 are staff members. All schools remain on virtual instruction until after the holiday break. Today is the last day for classes.