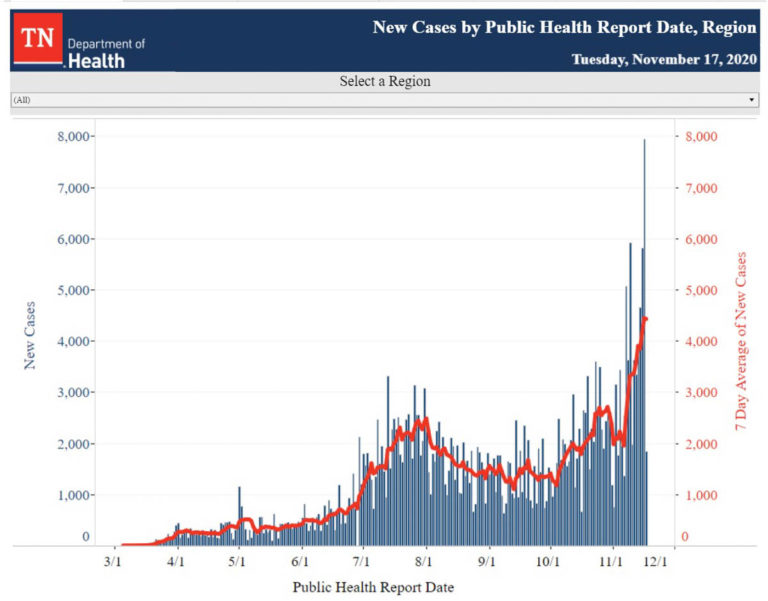 It’s another beautiful day to get outside and breathe some fresh air. I usually listen to WUOT in the mornings, but I switched this morning to New York City’s WNYC to listen to Morning Edition. “It is 32° in Central Park . . .”

Our whole family has spiraled down the how-much-we-miss-New-York-City hole a hundred times since March, but for some reason, that made me want to be there more than ever, feeling the crisp New York air on my skin and kicking through the leaves as the kids scurry about. Maybe next year. We’ll be back New York, we’ll be back.

Tennessee reported 1,841 new cases yesterday, bringing the totals to 298,288 confirmed cases, and 22,441 probable cases. 276,497 people are considered to have inactive cases and 17,796 Tennesseans currently have active cases of COVID-19. The new case number dropped Tennessee far down the list for most daily cases nationally yesterday, to 27th, as many states are reporting extreme high numbers and Tennessee hit a lull. The state is averaging 4,425 new cases per day.

As new cases lowered, deaths for the day increased. 72 deaths from COVID-19 were reported across the state for the day, the seventh highest total reported in the U.S. for the day. It was the fourth highest single-day total for Tennessee since the beginning of the pandemic. All four of the highest single-day totals have been reported in the last three weeks. The state is averaging 46 deaths a day, the highest the average has risen since the beginning of the pandemic.

The state also continues to set hospitalization records, as 54 additional people were admitted to the hospital yesterday. Since the beginning of the pandemic, 11,255 Tennesseans have been hospitalized with the illness. New records continue to be set daily for all categories of COVID-positive hospitalizations. The latest updated data reveals 1922 COVID-positive Tennesseans are currently hospitalized, compared to 1,212 a month earlier. Of these, 525 are in ICUs and 234 are on ventilators. Of these, ICU availability is the lowest at 12%.

As anyone who follows these numbers would know immediately, the number of reported tests dropped dramatically yesterday, from a record 61.5 thousand the day before to a below average 14.3 thousand yesterday. Nearly 4.2 million tests have been administered in the state since the beginning of the pandemic. The state reported a 13.22% positive test result rate for the day and Johns Hopkins reported 13.3% for the most recent seven-day period.

In other state news, the Tennessee Education Association has delivered a list of requests to Governor Lee. The requests, among other things, calls for a mask mandate for all students and staff state wide, statewide guidance on infection thresholds for school closures and funding for extended COVID-19 related sick leave for teachers.

In a press conference yesterday, Governor Lee stated, “We are in a crisis.” While continuing to urge Tennessean’s to wear masks, he made no mention of mandating it, though he did say his administration is preparing for “difficult decisions.” Tennessee Department of Health Commissioner Dr. Piercey said health care workers in the state are “undersupplied and overextended.” Discussing surge capacity, Governor Lee said “we’re not there yet,” but “we know that at the current trajectory there will be a day when we get there . . .”

The Knox County Health Department reported 119 new cases today, down from yesterday’s record 373, and the 19th consecutive report of 100 or more cases for the day. 16,155 confirmed cases and 899 probable cases have been reported since the beginning of the pandemic. 14,721 people are considered to have inactive cases, while 2,195 cases remain active.

For the fourth consecutive day, the county set a new daily high for hospitalizations, with 91 COVID-positive Knox County residents currently in the hospital. No additional deaths were reported today, and that number remains at 138. The state now reports a 14.1% positive test result rate for Knox County.

Metrics were also updated today, with no green metrics reported for the first time since the beginning of the pandemic. The metric for stable or dropping case numbers remained red, as did the metric for test quantities and turn-around time. Moving to yellow for the first time, public health capacity to contract trace in a timely manner had previously remained green from the beginning. Hospital capacity remained yellow, but is given new nuance with “yellow, rising” the current designation, meaning it remains yellow, but is trending in the wrong direction. Stable or reducing deaths, for obvious reasons, remained red.

It appears that the state’s afternoon report of lower test and case numbers or higher test and case numbers is predictive of an increase or decrease in Knox County’s numbers the following morning. Deaths appear to be the reverse, with a high number of deaths reported in the morning for Knox County being followed by a high number for the state, as was the case yesterday. Given there were no deaths in Knox County this morning, I’m guessing deaths will be lower for the state when they are reported this afternoon.

It’s a reminder, none of these numbers are real time, but rather come out as they filter through the system. While daily numbers can be helpful, trends tell us much more.

The University of Tennessee is reporting 79 active cases of COVID 19, including 61 students and 18 employees. 1932 students and staff have now been moved to inactive status. Only 4 new cases were reported yesterday. 490 students (410) and staff (80) are currently under isolation or quarantine, the highest that number has been since September 23.

No new clusters have been reported this month. The university reports testing totals by week, so this week’s level of on-campus testing won’t be known until next week. If students are doing as they are encouraged to do, the numbers should go up as they are tested before returning home. If students are doing as they are at other universities, they are avoiding testing even more than before, so they won’t be prevented from returning home.

The Knox County School System is reporting 111 active cases, the same number as yesterday, though the breakdown of 39 staff members and 72 students is slightly different. It repeats the record set yesterday for active cases since the beginning of the school year. 710 students and staff are now considered to have inactive cases of the illness.

The list of school’s operating virtually only remains the same: