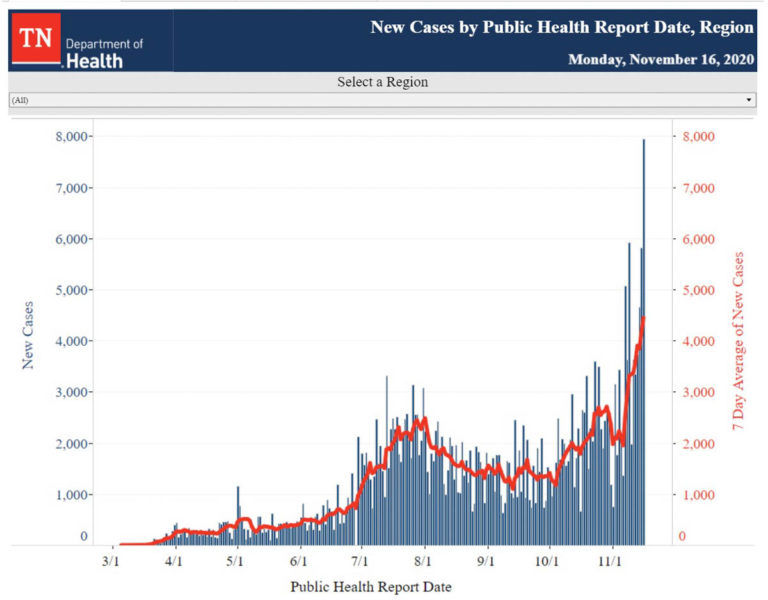 Well, it has been an interesting morning on social media. On two separate posts, one on my personal page and one on the Inside of Knoxville Page, I’ve learned a lot.

On my personal page I was informed that the media doesn’t call elections, that President Trump will return to office for a second term in January and that massive voter fraud will sent people to jail. If you don’t believe that, I learned, you have “traded a lie for truth” and you are controlled by a media narrative.

On the Inside of Knoxville Facebook page, I learned that masks do not work, lock downs don’t work, and we can’t stop a virus. The mortality rate is low, so it does not matter. Science is being used to destroy businesses and schools. We are being kept apart to keep us from discussing the elimination of our rights.

It becomes a challenge simply to affirm our own grasps on reality. A large portion of the country believes President Trump won re-election and the virus either isn’t real, doesn’t matter or is a diabolical plot. No evidence – like 1/4 million dead Americans or a televised swearing in ceremony will change their minds. All we can do is take walks in the sunshine, limit our exposure to news and social media and spread kindness, love, and grace to everyone wherever possible in hopes of a better day.

In the meantime, COVID-19 is real, and cases, hospitalizations and deaths are soaring internationally, nationally, and at the state and local level. This is not the time to relax the care you take for yourself and others.

The state of Tennessee reported a record-shattering 7,951 new cases yesterday. The previous record, 5,919, lasted one week. There are now 296,654 confirmed cases and 22,234 probable cases in the state. 271,864 of those cases are now considered inactive, leaving 20,867 Tennesseans with an active case of COVID-19. For the day, the state ranked 4th in the U.S. for new cases and the seven-day average for cases is 4,446 per day.

The state reported 30 additional deaths yesterday, bringing the total to 3,923. For the day, Tennessee reported the 10th highest death total in the U.S. The state is now averaging 45 deaths per day, the highest that number has been since the beginning of the pandemic.

Statewide hospital capacity appears to be adequate, but a word on how I reach that conclusion is worthwhile. The state reports the percent of capacity remaining for beds, ICU beds and ventilators and I am assuming that if 10% or more is available for each, we are OK. They operate at high percentages most of the time when we are not experiencing a pandemic.

If a category drops below 10%, I will report it as a concern. Also, these numbers are state-wide and do not preclude the possibility that one area or another of the state is in stress. If anyone reading this who knows more than I do about the topic wants to correct how I am looking at those numbers, I would welcome the information.

The state also set a record for number of tests reported in a day, with 60,862 tests administered. This is much to the state’s credit and it is why we discovered so many cases – it isn’t why we have so many cases. The real concern is that even at that staggering number, our positive test result rate, as reported by the state, was 13.06%. The more tests you give, the lower that number should go. And it didn’t. Johns Hopkins is reporting a seven-day average 13.3% positive test result rate. These numbers are most alarming.

For the third consecutive day, Knox County has broken it’s single-day total for new COVID-19 cases, adding nearly 1,000 new cases in those three days (950). Knox County has had more cases in the last three days than in the first four months of the pandemic. We are also currently at highs for hospitalizations and deaths.

The saddest news of the day is that Knox County experienced its highest death toll for any single day since the beginning of the pandemic with 7 additional deaths reported today. Of these, five were among people aged 64 to 75 and two were among people over 75. 33 people have died in the first 17 days of the month of November, leaving it only 1 death short of the record of 34 set in July, with thirteen days remaining.

Charity Menefee chaired today’s meeting. Speaking in a very somber tone, she did not start with the usual moment of gratitude, but rather with an urgent plea to the community to follow the five core actions all the time. She noted that we’ve set records for three consecutive days, set hospital records for two consecutive days and today are reported the highest death total.

She showed a graph demonstrating that cases spike after holidays in the county. Showing the spike after Halloween has not diminished, she warned that with Thanksgiving on its heels, we are likely to see continuing increases in cases, deaths and hospitalizations. She asked people to consider not gathering given that these gatherings will likely spread the virus. She said following the five core actions, you are helping your community, the health care workers and your family.

She said it is becoming difficult for the Health Department to contact everyone quickly. She asked for anyone who is exposed to start their isolation immediately and contact your contacts as you can do so more quickly than they are able to at this time.

She confirmed the above numbers. She said testing is continuing daily with the exception of Thursday when they will be sponsoring two flu clinics. There will be no testing next Thursday and Friday. She suggested visiting the website for testing locations.

The University of Tennessee is reporting 90 active cases of COVID-19, up from 76 the day before. Of these, 75 are students and 15 are employees. Thirteen new positive tests were reported (this doesn’t add up to a jump of 14 active cases, so I presume cases from previous days were discovered).

70 employees, 129 residential students and 246 non-residential students, for a total of 445, are currently quarantined or isolated. The number is up significantly from yesterday (390), but is lower than a number of previous days. There are no new clusters reported.

The Knox County School System is reporting a record 111 active cases, including 74 students and 37 staff members. The new high marks the third consecutive day the system has broken the previous high record.

693 students and staff have recovered, and 1,733 are currently in quarantine or isolation. The isolation number includes 1,520 students and 213 staff members. The total in isolation or quarantine is also a new high for the academic year. The metric measurements remain the same, with yellow for staff attendance, red for custodial support and for substitute availability and green for the others.