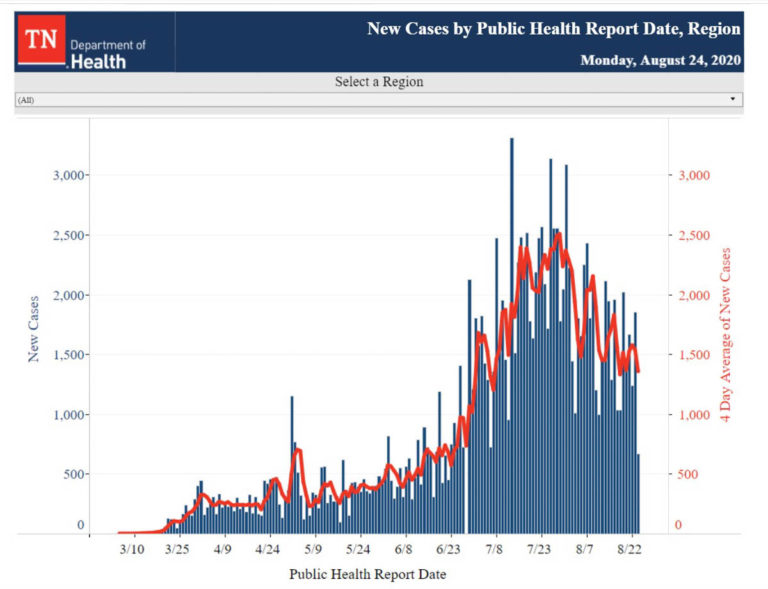 How did the first day of virtual and in-person classes go? We’re doing OK, so far, at the Urban Academy. Thankfully, we’ve got a semi-autonomous sixth grader to go with our dependent Kindergartner.  The technology learning curve is steep for everyone: parents, grandparents, students and teachers. UT is also back in full force and taking classes. A large experiment has begun for everyone, not just those directly involved in education. Soon we’ll know if we can navigate in-person classes at UTK and with Knox County Schools. Here’s hoping.

After fairly sharp declines for a week or so, the trend has taken a pause with today’s numbers. The 213,719 new cases is about 15,000 higher than the same day the previous week, bringing the seven-day average of daily cases upward by about 2,200 from yesterday, to 249,406 cases per day. The number was close to 264,000 at its peak earlier this month.

Twenty-three countries reported at least 1,000 new cases of COVID-19, yesterday. The number is slightly fewer than yesterday and a week ago the same day, each of which included twenty-five countries above the mark. The number of countries reporting 10,000 or more increased, once again, to four: India (59,696), the U.S. (41,484), Brazil (21,434), and Colombia (10,549). This marks 18 consecutive days that India has topped the number of new daily cases.

Spain has made military troops available to its regions to help with contact tracing. An encouraging development in Spain’s resurgence (and India’s current surge) is that the mortality rate is much lower this time around. Argentina recorded both its highest number of cases and deaths on Monday. 66 new cases are connected to one South Korean Starbucks, including 27 customers and secondary infections from them. Interestingly, given that masks are not intended to protect the wearer, employees wearing masks were not infected. Still, it shows how easily one exposure can lead to a significant outbreak.

The 41,484 new cases compares to 40,576 the same day the previous week, resulting in a slight increase in the seven-day daily average of cases from 43,135 per day to 43,266 cases per day. I noted, yesterday, that the decline in new cases, which has been very rapid in recent weeks, slowed for the day. Today marks the first day since August 10 that the decline reversed for an increase. The August 10 increase was a one day anomaly, and the same may be possible for today’s modest reversal.

The 510 deaths reflect a decline from 571 the same day the previous week, resulting in a very slight drop in the seven-day average to 980 deaths per day. It continues a roughly 10 day slow decline in deaths. States reporting the most deaths included California (105), Florida (66) and Texas (59). In a bit of a surprise, since its case numbers have not been in the news recently, Massachusetts reported the fourth highest total at 28.

NC State, after moving its students to virtual instruction, has paused its football program. Will the office return after the pandemic? Maybe not as we knew it according to this report. A week after starting classes, the University of Alabama is reporting 566 cases of COVID-19. Testing delays will likely grow worse this fall as testing for both flu and COVID-19 will compete for testing bandwidth.

The state of Tennessee reported a dramatic drop in cases yesterday, from 1,854 on Sunday to 667 on Monday. The 64% drop, while welcome news, must been seen in the context of testing which dropped from about 37,000 tests on Sunday to about 14,000 on Monday, a drop of 62.2%. In other words, we found fewer cases because we tested fewer people.

There is no absolute number of tests we should give, so that’s not to say we should test 37,000 every day, only to say that the drop doesn’t mean Tennessee had over 60% fewer cases from one day to the next, we simply found 60% fewer. Tennessee has largely done a good job with its testing program and the most encouraging news, if accurate, is that the positive test result rate has fallen to 5.3% according to the state site and 5.2% according to Johns Hopkins University. This actually does mean we have less spread.

The state reported an additional 21 deaths yesterday, putting our seven-day moving average at 29. If we’re truly seeing a drop in cases, we should soon see a drop in deaths. Also reported was an additional 43 hospitalizations, bringing the current number of hospitalizations to 923, up slightly from the previous day, but down from a peak of over 1,110 in early August. ICU usage has also dropped, but ventilator usage has increased slightly over the same period.

Locally, the Knox County Health Department is reporting 50 new cases today, continuing the odd pattern of 100+ days, followed by cases around 40-to-50. I asked the health department about the pattern yesterday and whether it might result from UT reporting patterns, testing patterns, etc. They replied, “Yes, we have noticed that as well and we are keeping our eye on it. To our knowledge, we are not aware of any issues with the reporting of the data.”

The fifty additional cases bring Knox County’s total to 6,029. 4,031 have recovered and 2,160 remain ill. The number of active cases continues to run in the same range it has for the entire month. A total of 251 Knox County Residents have been hospitalized at some point and 31 are currently hospitalized, a drop of five from yesterday. Two additional deaths were reported today, bring that total to 55 and there are 217 probable cases.

Chancellor Plowman updated the UT community today and thanked those who are doing their best to follow proper COVID-19 guidance, but noted that some are not maintaining consistent behaviors. As indicated in the graphs, there are 126 active cases on campus, with 120 students testing positive. 489 people are quarantined, 122 are residential UT students, the others are non-residential. UT numbers were dropped since yesterday as they realized they were including some pending tests in the numbers.

An email has been sent to all students noting disciplinary action against four students, three of whom hosted parties and one went out while knowingly ill. The students face suspension or more. She said they are following up on other reports.

Knox County Schools is reporting a small number of cases resulting in a large number of quarantined or isolated students and staff. As seen below, the current numbers include 13 active cases (mostly staff) and 280 people in isolation or quarantine (mostly students).

Charity Menefee chaired today’s conference and thanked everyone who has joined the health department team to help with contact tracing and other tasks. She also thanked people who have responded kindly when contacted by employees. She discussed going to the grocery store, suggesting to always wear your mask, keep it on if you run into a friend and keep your distance. Use high-risk hours, if possible, limit your time in the store and how many people you take. Sanitize your cart and your hands. Wash when you return home. Use pick-up if possible.

Testing this week is at the Halls Senior Center. No insurance is required. She confirmed the numbers above. The Knox County Board of Health meets tomorrow via Zoom and can be watched on CTV or via the Knox County Youtube Channel.