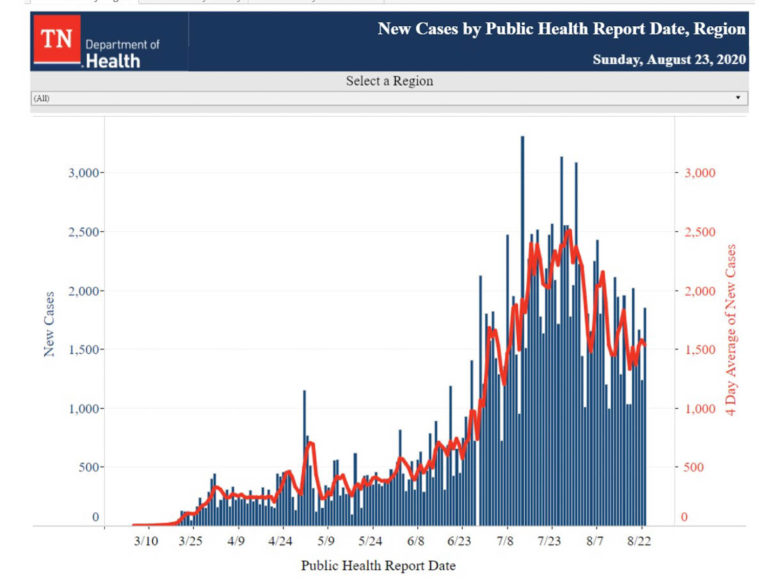 I hope you were able to enjoy some of the amazingly cool weather we had this weekend. We got outside to grill some great burgers from Hen Hoc and to visit (socially distanced and outside) with family. A lot of people are missing a lot of people and it’s good to find ways to connect the ties that bind us. Of course, we also found time for “Karate Kid” (the 1984 original), finished last minute prep for virtual school and we are near the end of our bedtime book, Juneau the Sleigh Dog by West Lanthrop (1942). It was my mother’s copy which she read as a child. Now I read it to a new generation and those ties continue.

France, the next country down on that list from yesterday, reported 4,897 new cases, the highest number since April 14th. Given how hard France seemed to be hit early in the pandemic, it is shocking to consider that yesterday was their fourth highest day since the beginning of the pandemic, which should serve as a warning to countries which are improving. South Korea becomes the latest country to institute additional mask requirements (in Seoul), expanding them to outdoors. The government is warning it will be forced to return to shutdowns if this doesn’t work. Meanwhile, doctors in Hong Kong are reporting the first confirmed re-infection of a person who had the virus 4 1/2 months ago.

The 430 deaths reported yesterday continued the downward trend in national daily deaths and represents the lowest single-day total since August 2nd. It also represents a drop of 97 since the same day the previous week, resulting in a slight decline of the daily average to 989. It’s the first time the daily average has been below 1,000 since July 27. States leading in deaths: Texas (90), Louisiana (59), Florida (51) and Georgia (40).

With the reduction in over-all numbers, there are fewer states reporting more than 1,000 new cases each day. Yesterday, there were nine, with only three reporting multiple thousands: California (5,096), Texas (3,335), Florida (2,974). Other southeastern states near the top included Tennessee (5th), Georgia (6th), Louisiana (7th), North Carolina (8th), Virginia (9th), South Carolina (12th), and Mississippi (14th). Illinois and Michigan each made the top ten and are seeing rising rates. On Saturday, Michigan reported 1,426 new cases, the most for a single day since April 24th.

One of the most encouraging signs nationally, is that the positive test result rate has now declined to just over 6%. This is a marked improvement over the beginning of the month when the rate was running around 8.5%. Something appears to be working. Experts are suggesting the recent reductions in U.S. COVID-19 cases cannot be attributed solely to the decrease in testing, given the drop in hospitalizations and positive test rates. They note the biggest drops came in states instituting mask requirements. The Financial Times reported over the weekend that President Trump is considering fast-tracking a vaccine to be introduced before election day. The University of Notre Dame became the latest major University to revert to virtual instruction after a spike in COVID-19 cases.

50 people were hospitalized yesterday, bringing the current total to 868 hospitalized and the pandemic total to 6,378. Reported testing surged after a recent drop and contains, perhaps, the best news of the numbers: With over 37,000 tests reported yesterday, the state said only 5.7% were positive. It reflects confirmation that spread is actually slowing, relative to previous weeks. It’s still a bit high, but much better.

The number of hospitalized patients is also a source of encouragement. The number of hospitalized COVID-19 positive patients in the state has recently declined and is currently similar to mid-July. ICU and ventilated patients have declined slightly and are similar to the numbers about a month ago. The four deaths reported yesterday is the lowest the number has been since July 26. That said, 61 deaths reported Friday was the largest number of deaths in a single day since the beginning of the pandemic, and the average daily deaths remains high at 28.

Locally, the numbers also show some sign of improvement, though there are mixed signals. 5,979 Knox County residents have been diagnosed with COVID-19 since the beginning of the pandemic and 53 have died. Those numbers increased by 277 cases and 1 death over the weekend. What makes it difficult to parse, is the up-and-down pattern that has emerged, with greatly reduced numbers one day, followed by large increases the next (not perfectly, but close). Last eight-day numbers of case increases: 109-49-119-46-127-45-54-111. I’m awaiting a response from the Knox County Health Department as to what might be producing the odd pattern.

3,911 people have recovered in the county and 2,225 remain ill. The number of active cases has remained remarkably steady for most of the month, ranging between 2,000 and 2,300 each day. Since Friday, an additional six people have been hospitalized, but (I’m assuming a little here), it appears 9 were discharged and one died, leaving a drop in current hospitalizations to 36 Knox County residents. There are 210 probable cases, up slightly from last week.

I’ll attempt to add two new charts to the daily report, including the chart above which shows UT active cases and the chart below which shows the number of Knox County Schools staff and students currently in quarantine or isolation. Both numbers are of keen local interest. The UT active case number increased by 26 over the weekend, to 136. The Knox County Schools report 185 in isolation, which is mostly comprised of students. The numbers appear to not be updated over the weekend as the last three are the same.

In other local news, Lenoir City Schools called off in-person high school classes for Monday after recently reported cases. Not reported: How many cases, students or staff or the precise hopes for the impact of one day out of class. Tennessee is the latest state to accept the $300 unemployment supplement contained in a recent Presidential executive order. The state has opted to accept the federal portion, but not to add the $100 state portion. Knox County Commissioner Richie Beeler has tested positive for COVID-19 and is under quarantine as are two other commissioners as a result of their exposure to Beeler. The commission will now meet via Zoom.