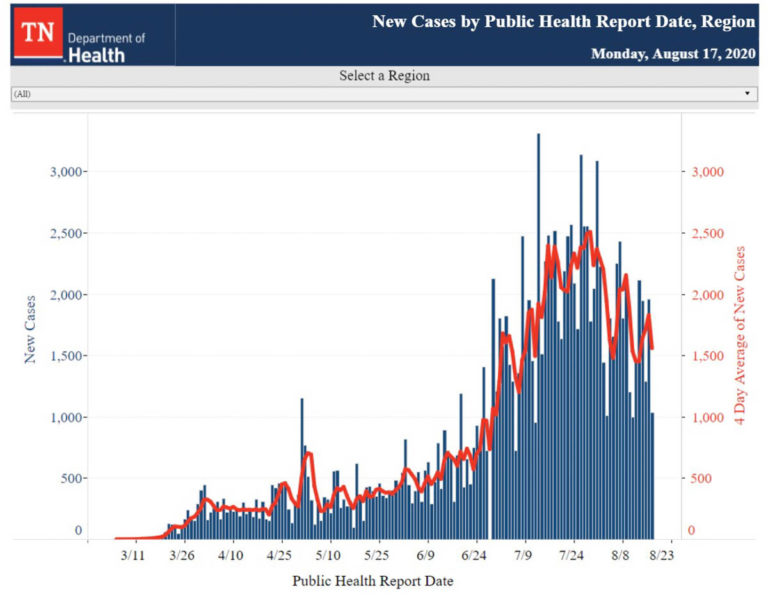 A little coolness in the air last evening and this morning says that summer is waning, though it won’t give up without a fight. The SEC announced football schedules yesterday, hoping this fall will be modestly normal. I continue to be startled by how fast time has seemed to pass (in some ways, not as much in others). I love the fall and life will be better when we get there, if I can just sit outside and enjoy a bit of crisp air on my skin. I hope fall brings good news all around.

A day after reporting the smallest number of new cases worldwide since August 3rd, the number of new cases dropped again, this time by about 14,000 to the lowest number since July 13th, the last time fewer than 200,000 cases were reported for a single day. The seven-day moving average continues in the same range where it has recently held, but it drops by 1,400 to 259,042 cases per day.

The 4,289 deaths also mark the lowest number of deaths since July 27th. Like worldwide cases, the number has plateaued in a relatively narrow range recently and the average currently sits at 5,709 deaths per day, down from a recent peak of 5,871. Countries leading deaths, yesterday, included India (880), Brazil (775) and the U.S. (589).

Three countries topped 10,000 new cases yesterday: India (54,288), the U.S. (40,612) and Brazil (23,038). Twenty-five different countries reported at least 1,000 new cases. Of the 25, seven are Latin American countries. Spain, Israel and Germany are notable for their presence after dramatically lowering their numbers after a first wave. Iraq is a country of concern as cases there ramp up quickly.

Here’s a look at what’s happening in France as the virus re-emerges. Here’s a broader look at nineteen European countries which are currently concerned about a re-emergence of cases. In a strange foray into the global pandemic, President Trump called out New Zealand yesterday, as a country touted early for success, but now having a “big surge.” It is strange because New Zealand has reported a total of 22 deaths in a country of 5 million, or 4 deaths per million, whereas the U.S. has reported about 174,000 deaths or 525 deaths per million.

The number of new cases reflected a drop over over 9,000 cases from the same day the previous week. The reasons for the drop include a drop in the positivity rate (percentage testing positive) from 7.3% to 6.6%, which is very good news. Additionally, however, the number of tests reported continues to decline. A week earlier, roughly 722,000 tests were reported vs. about 652,000 for yesterday, a drop of about 9.7%. The seven-day average, continuing to drop, now sits at 50,800 cases per day.

Deaths continue to remain virtually unchanged, though they have inched up slightly in recent weeks. Today’s seven-day average is up three from yesterday to 1,068 Americans dying daily. The three states leading in deaths continue to far out-pace the others: Texas (117), California (99) and Florida (83).

The University of North Carolina called off in-person classes after 130 cases were reported, including clusters from dorms, apartments and fraternities. Nearly 600 Miami-Dade public school employees have tested positive. An improved saliva-based test may help ease some of our testing crunch and yield faster results.

The 1,036 was a dramatic drop from the day before, at which point 1,961 cases were reported. For readers who have tuned into the conversation for the last week, you might guess there was a drop in day-over-day testing.  You would be correct. The 47% drop in new cases came as testing dropped by 50.1%, from 27,582 to 13,768. The positive result rate remained unchanged at 7.6%.

The best news in the state may be the leveling off in hospitalizations. Today’s number is slightly higher than yesterday, at 1,022. The number has been roughly around 1,000 for a month. 340 COVID-19 positive patients are in ICUs and 163 are on ventilators. These numbers have also remained relatively stable for a month.

The Knox County Health Department is reporting pandemic totals of 5,433 cases and 51 deaths. 3,384 patients have recovered and 2,251 remain ill. A total of 236 have been hospitalized at some point and 38 COVID-19 positive Knox County residents are currently hospitalized. Today’s new cases totaled 54 and there was one additional death. There are 203 probable cases. Today’s 54 cases is the lowest since July 13 (though it is the same as August 4).

Dr. Buchanan chaired today’s meeting and expressed gratitude to families as the prepare for the new school year and make the best decisions for their families. She said the school plans are good, but they also depend on families to follow the five core actions outside of school.

She addressed how to safely fill up with gas. She said use a sanitizing wipe to handle the pump, use hand sanitizer afterwards and wash your hands as soon as possible. If you enter the convenience store, please wear your mask and keep your distance.

Testing next week will be M-W-F at an alternate site (didn’t catch it – check the website). She noted that benchmarks will be updated tomorrow and the Board of Health will meet tomorrow night. She confirmed the above numbers.