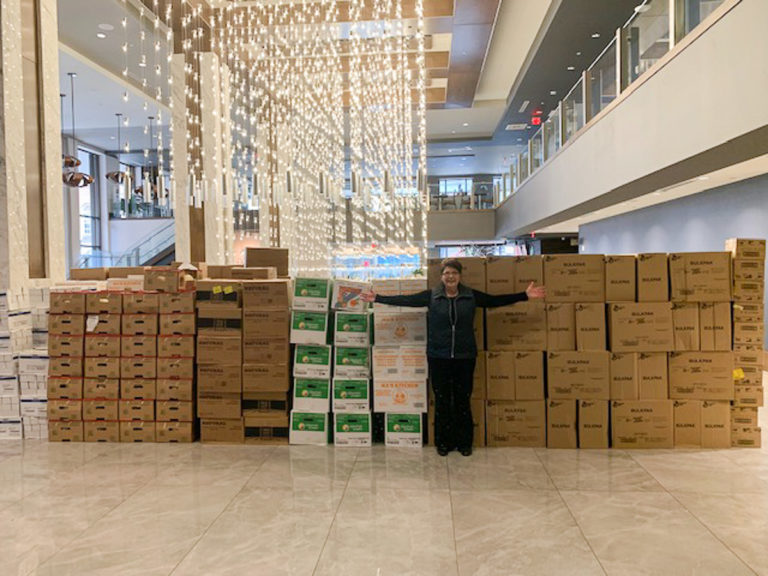 Today, at Embassy Suites (507 South Gay Street), from 9:00 a.m. and running until noon or the boxes run out, food boxes and bags will be handed out to any area workers who have been laid off due to the COVID-19. It’s an idea that started with Tracy Hicks, General Manager at the Hotel. It grew into a massive cooperative effort involving many out of concern for the people who make downtown the wonderful experience so many love.

Just a week ago, Tracy was thinking of what she could do to help. They were looking through the coolers at the hotel and thinking of the food that would be wasted. She called Alex Apking, their local representative with Sysco, a major national food supplier, and asked what he thought about joining together to do a food drive for downtown workers. She knew Sysco also had food that would be wasted as the restaurants, bars and hotels they serve are either closed or seriously limited.

On Monday of this week they began to call suppliers and the idea grew rapidly, culminating with a forty foot truck filled with food arriving at the Embassy Suites location. The president of Hackney Furniture, which had supplied much of the furnishings for the hotel, heard of the project and called to say he was sending 300 country hams.

Saying, “Many hands make light work,” Tracy said that people came together from all directions. Citing the many downtown residents and business owners that joined in, she said, “They all have good hearts for workers.” She rattled off a list of people and businesses who have been involved to collect food and to help organize it into boxes and bags: Workers from Cru Bistro, the Director of Sales from Hyatt Place, volunteers from Courtyard and Residence Inn by Marriott and from Holiday Inn, Wake Spa, Coffee and Chocolate, United Printers, HD Supplies, Knoxville Beverage Company and bartenders from Embassy Suites.

She had a teacher from Knox County and another from Loudon County helping pack boxes. The most poignant moment may have come when a man approached her on Gay Street and asked if he could help. He said he lives downtown and the service industry workers are what makes downtown what it is. He gave a $250 gift card and plans to help distribute the food this morning.

The bags and boxes (each person driving or walking up tomorrow gets one of each) have a wide range of foods and snacks. Hot Dogs, Hamburgers, Potato Salad, Bread, Chips, Eggs, Cereals (extra large industrial sized bags), Lettuce, onions, potatoes, apples and more are included.

Those  requesting the food will be asked where they worked and how many people are in their household, which is simply to help track how many people received help and where the help went. If children are present or in the family, Easter candy will be included thanks to a $500 gift card provided by Eagle Distributing.

Alex said he estimates the bag and box pairs to total close to 400. Tracy says they want to give it all away. Even the left-over portions of juice, yogurt, fruit and snacks were piled onto a pallet and those will be taken to Mobile Meals on Monday. She says she hurts for those who are living paycheck-to-paycheck and she hopes this helps.

The City of Knoxville has been helpful, she said and they’ve provided police to manage the traffic at the event. Mostly, she wants to help those who need it most. So come to 507 South Gay Street this morning and feel some of the love. I hope to take some photos as it begins to add to this article.

Here are photos from the event. Get there quickly, if you need food: