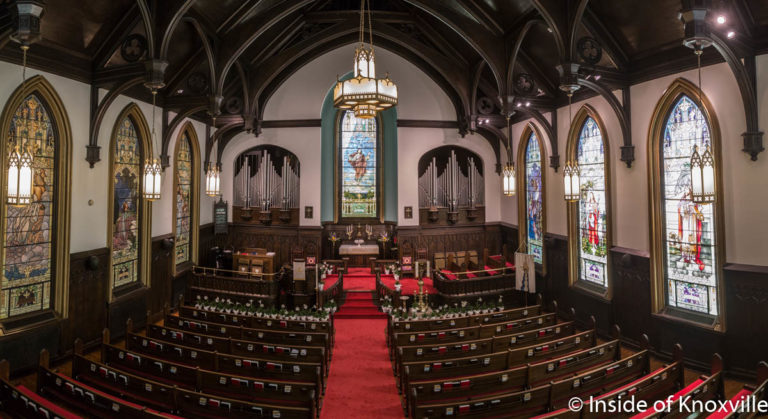 The 2019 Fourth and Gill Tour of Homes featured a range of homes, from stand-alone, to more urban-style homes inside an elementary school. The tour also include a former high school converted to apartments and two churches. In the second part of our tour, we visited more homes, as well as one of the churches. As always, credit for all the great information about the homes goes to Arin Streeter who researched and wrote the content for the tour booklet.

We’ll start at 1000 Eleanor Street. Like many homes in the neighborhood, its size is a bit deceptive from the street. Once inside, in addition to a beautiful room to the right featuring one of, if not the most beautiful fireplaces in a neighborhood full of them, to the left is a beautiful, original staircase. It leads to cozy rooms and a sitting area at the top all featuring great angles and lots of original wood.

Wood is a theme in the house, as it is home to Gordon Coker and Gabrielle Boudreau. Gordon makes beautiful wooden bowls he call CokerBowls, which he makes from local wood. I’m proud to have a couple in my home (and you should check them out!). Gordon and Gabrielle also join Urban Brother and myself as being the only local people who can pronounce the name of his hometown correctly (Natchitoches, Louisiana – go ahead, give it a try! Nope, that was wrong.)

It’s a bit of symmetry that the current residents are from French Louisiana, as the original resident, Charles Cramer was born in France and immigrated. He lived in the shorter version of the same home until this one was completed in 1905 and he moved into his larger home. He died in 1918 and his wife, Bertha, died in the home in 1926.

The home was purchased in 1927 by Duff and Althea Perry whose daughter inherited and lived in the home until 1978. Gordon and Gabrielle have lived in the home since 1997 and have added a woodworking shop out back on the foundation of the former carriage house.

As many times as I’ve walked past and photographed St. John’s Lutheran Church from the outside, I’d never been inside. What I found was as beautiful, if not more so, than the fascinating exterior. The interior wooden trusses, spectacular stained glass and beautiful altar are well worth the walk inside.

Built in 1913, the building is an example of “gothic revival” architecture and was designed by R.F. Graf whose parents were Swiss immigrants living in Knoxville. The windows were built in Ohio and the organ in Chicago and imported to make this perfect space just a little more special. Do visit if you get a chance.

821 Luttrell Street is the site of one of the oldest homes in the neighborhood being sort of in the country in 1886 when John Ward (no, not that one – a little early for him). It was such an early adopter in the neighborhood, the city didn’t even assign it an address initially, just noting that it was on the corner of Gill.

John was “a bookkeeper for the United Order of the Golden Cross,” which was a secret society which mysterious rituals with providing life insurance policies to its members. It also treated men and women equally, but required abstinence from alcohol – so, it was a mixed bag of progressive and not-so-much.

The current owners have only lived in the home a few months and what they’ve done is spectacular. The home was featured on a previous tour and obviously needed a lot of love and they’ve given it just that. They’ve “updated the heating system and roof, as well as installing full smart-home features . . .”

Their decor (modern in an older home – lovely!) and the fact that they found a bone in their yard that had to be forensically identified (it was not human, as it turns out), was the talk of many people on the tour. The transformation of the home is stunning.

Finally, I stopped at 914 Luttrell Street in a home that is simple, beautiful and a very good (manageable) size. The front is surrounded by a beautiful fence and the large wraparound porch features gorgeous brick columns. The interior features tones of craftsman touches with lots of wood and built-in cabinets.

The home was built in 1921 by William Sterchi, one of the three brothers who started the furniture company on Gay Street. By the time he purchased the home he had been bought out of the company and had become a bank president. He lived in the home only briefly before moving to a larger home down the street.

After the next owner lived in the home for five years – after paying the, then enormous, price of $10,000, the home was purchased by two sisters, Rosemma Ritter and Marie Simcox. Joined by other members of their family, the home was an all female household for many years and was held by someone in the family for over sixty years. It has been lovingly renovated, including a beautiful bathroom renovation that I could not photograph well.

And so, it was another great tour and I’ll look forward to the next. Before then, I can assure you, I’ll take walks through the neighborhood just to look at the homes and to enjoy one of the best neighborhoods in the city. I started with irises, so we’ll end with these amazingly beautiful azaleas I noticed on Luttrell Street. The flower has a special spot in my heart because I grew up in the “Azalea City” (Mobile, Alabama). This bush would fit right in further south.