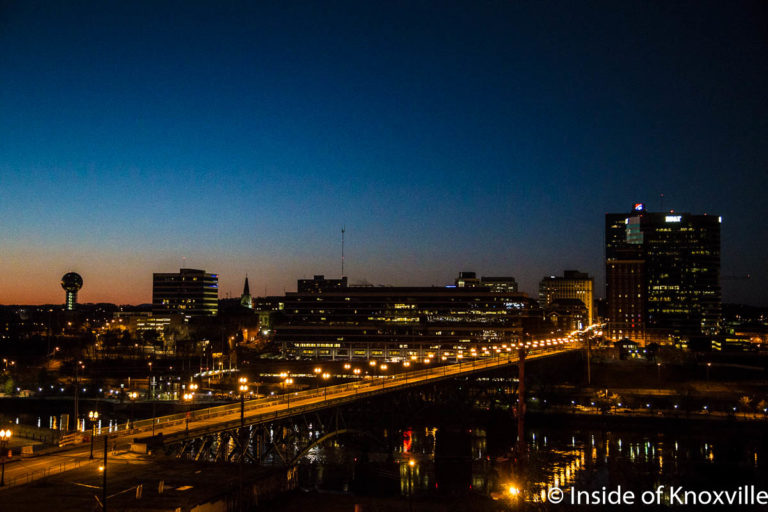 Not that it’s disappeared. It’s still there, but there are questions about exactly where it might be. A friend asked me this question recently then, after a rambling answer, suggested it might be a good topic for an article. Following that I had a conversation with another friend about covering the Women’s March which will be held at Chilhowee Park this year (I won’t be covering it). Most recently, a comment was made on this blog stating that the Old City isn’t downtown!

I think we’d probably all agree that Market Square is the heart of downtown, right? I suspect a tourist could nail that one. To some infrequent visitors, that’s about as far as it goes, though some might say, “No, it also includes that stretch of Gay Street with Mast General Store!” Fair enough, but then there’s that Sunsphere thing and those historic theaters. They are downtown, right?

There is no real official designation for downtown, though there are some boundaries that more people would accept. The Central Business Improvement District covers .67 of one square mile of what it calls the “core of downtown.” As you can see on their map, it is bounded roughly by the railroad tracks to the north, Eleventh Street to the west (which pulls in the World’s Fair Park, the river to the south and Hall of Fame to the east with a little extension to include the coliseum. So that’s downtown, right?

Except, think about what’s left out of that mix: the new Regas Development, White Lily and Zoran’s E.D. Bailey Barbershop, for goodness’ sake! One answer to that, of course is that most people consider the northern boundary to be the Interstate, which pulls in some of that. In fact, I think many people would say downtown’s boundaries are the Interstate, Henley Street, the River and James White Parkway. Agree? I bet a bunch of us do.

But think about those boundaries for a just a minute. Three of the four are artificial and they didn’t always exist. Did downtown shrink when we built the Interstate or turned Henley Street into a thoroughfare? If we blew them up would downtown suddenly grow?

What do I think? Well, it’s complicated and it’s all a bit fuzzy. When I started writing this blog and committed to focusing on downtown, I stayed mostly uptown, or the Main Street to Summit Hill stretch and the side streets, and the 100 block of Gay Street and the Old City. Together that would be how I defined “downtown.”

Part of that was just a practicality: How far out could I cover? I did extend it a bit on the occasion, writing about First Friday and other events at Ironwood Studios or Paulk and Company, but I had a full time job and going out that far was hard to accomplish with limited time.

In fact, when I went all the way out to Paulk and Company on Williams Street, I felt like I’d left downtown and entered some hinterland. Now? It’s surrounded by things like A Dopo Pizza, Mews I and Mews II, Geo Hair Lab and more. That’s not downtown? Really?

When I started doing this job full time in 2014, I had the luxury of exploring a bit farther afield. And the development energy started stretching those boundaries. Sevier Avenue got hot. New projects like the Electric Company Lofts and Marc Nelson Denim stretched development to the east. Central Street all the way out started popping. Cumberland Avenue got the treatment. Now where was downtown?

So, it’s all fuzzy. Downtown is more a concept than anything else. There are no official lines. There is a Knoxville city limit, but that is much farther out than most of us would consider “downtown.” Which leaves us where? I’d say with our own definitions which, for me, may even change depending on the context of the conversation.

For purposes of the blog, I’ve extended it in all directions. That doesn’t mean I’m right or that my definition has to fit yours, it just means that I’ve got my own fuzzy criteria. Part of it continues to be practical: How far out can I realistically cover and include in things like the 10 Day Planner? Part of it is what feels urban?

Feel? Yes. For me that’s a good part of it. Broadway feels like an urban corridor, so I cover it up to where Hall of Fame swoops in. Not that that’s a magic line for anyone else, but it’s my mental barrier for that end. I also consider Old North Knoxville, Fourth and Gill and Parkridge to be downtown neighborhoods. Maybe I’m crazy, but they feel like places “downtown people” might live.

I’ve extended a long way out Central Street in my coverage. That development feels like an urban extension to me. Happy Holler is not the suburbs. Businesses like the Corner Lounge, Hops and Hollers, Central Collective, Wild Love Bake House, Raven Records, Relix Theater, Mid Mod Collective, Steamboat Sandwiches and Loch and Key Productions fit the downtown vibe, don’t you think? Well, they do for me.

And to the south, I feel the same way about the Urban Wilderness. It’s a downtown thing. So is Ijams or, to the east the Botanical Gardens. Is everything in between those points connected to downtown? Not necessarily in my mind. Is Chapman Highway part of downtown? Not yet, though I’ve written about Knox Maker’s and Fort Dickerson, both of which are out Chapman.

To the west, what about Fort Sanders and UT? I think many people would say UT is not downtown, but look at it from the air and that perspective begins to seem a little silly. They are right on top of each other and should have a great symbiosis. That they do not is an article for another day.

So you see my downtown has more to do with a downtown or urban vibe than it does with specific lines – except where I have specific lines, like out Broadway. Am I crazy? Probably, but that’s how I’m seeing downtown these days. How do you see it? Is it a tiny square called Market? Bounded by big roads and a river? Bigger than that?