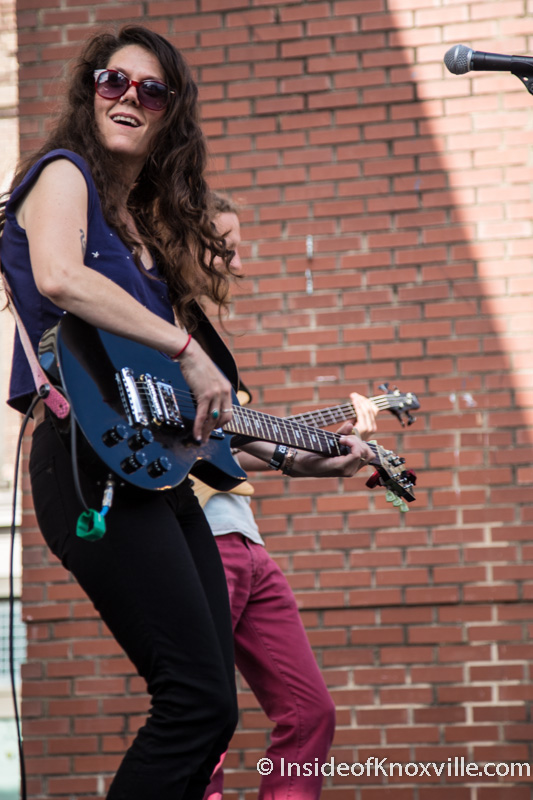 Rhythm n Blooms descends on the Old City in downtown Knoxville this Friday and runs three days, ending late Sunday night. During those three days, festival goers will be exposed to more good music than any of us will know how to wrap our heads around.

As I write this I am listening to favorites from last year whose CDs I downloaded during the festival – Zoë Nutt, Aaron Lee Tasjan, Birds of Chicago, The Lawsuits, John Moreland, Lee Fields and the Expressions, Shayla McDaniel. I heard most of these for the first time at the festival and have loved them since. I attend this festival expecting to reconnect with old favorites, but more particularly, to find new ones.

I was able to connect with Lilly Hiatt, one of this year’s featured performers (who I actually first heard as part of Blank Newspaper‘s Blankfest 2015). Her recent CD, Trinity Lane, reflects a maturation and command of her creative voice and presents a set of twelve distinct cuts exploring the depths of broken relationships. It’s alternately beautiful, exhilarating and painful to hear – but it’s difficult to stop. I spoke to her on the phone from her home in east Nashville about her musical heritage (John Hiatt is her father), the new album and her hopes and dreams.

I asked her where she drew her personal musical inspiration and she named Pearl Jam, Lucinda Williams and Neil Young. The thread through them all is the writing and she mentioned her friends John Moreland and Aaron Lee Tasjan (see above list) with whom she has also toured. She points out that her life is often pretty ordinary: “There are moments where I’m ‘this is very cool – all rock and roll!,” but mostly is less glamorous.

As the daughter of John Hiatt, she says, “I was around a lot of musicians growing up, in my house a lot of times, creative people.” Perhaps because of that she says, “I knew I would do this (be a musician) from early on. I just kind of knew.” I mentioned that Itunes labels her new album, “alternative,” which seemed surprising. “I don’t really care what people label it as. It’s probably more alternative than any other genre.”

“I feel like a part of me has found a groove. I’m sure there are all kinds of records to be made. I’m just not the kind of person to constantly reinvent myself.” Still, she admits she doesn’t know what changes might be ahead. “I’m just trying to weave the words in a way that makes sense to me. They come out. It’s usually something I’ve held inside and need to say. Hopefully, it connects.”

I mentioned the final song on the new CD, “See Ya Later,” reminds me thematically of “Most of the Time,” or “Don’t Think Twice,” by Dylan in which he says he’s moving on, but you know he’s having a hard time really doing so. I tell her it seems like a perfect conclusion to the album. “I will totally take that as a high compliment, lonely, but moving on. The order was pretty easy this time: I asked Dad. He said, ‘I’m not really good at that,’ then sent the track order. We talk about music all the time. It’s what we both do and live for. It’s a big part of our relationship.”

I told her I’d tried to imagine how it must feel to perform these songs on stage with all their painful confessions and explorations of a failed relationship and asked how that was for her and whether she preferred big stages or more intimate venues. With characteristic honesty she said, “How it feels performing really depends on the night. It does get to be more removed,” she pointed out the writing, recording, release and tour moves it chronologically away from the events explored, “and distance makes it easier. I love it all. Big crowds make you up your game. It’s just exciting to play.”

She’s struggled with alcohol addiction and is in recovery at a young age – she’s only thirty-three – and I ask about that as it relates to the musical world she inhabits. I mention Justin Townes Earle, Steve Earle’s son, who is in a similar position. She said the two will tour together soon. Of the other, she says, “I don’t make a big point of it on the road. My band knows. I have really good musician friends who are sober, too. To not drink is easier for me than to drink.”

As for the future, her goals are modest. This is a person who, until recently drove a 2002 Honda with 300,000 miles. When I mentioned it, she laughed, and admitted she’d gotten an upgrade, though it still runs. “My goals are to play, keep going, get a tour bus, play theatres, own a home, stability. Maybe one day, if I get lucky, someone will cover my song and have a hit.”

She says she can sometimes imagine what some singers might sound like singing her songs. I’ll be hoping she attains her modest goals and more. The new album is well worth tracking down and you can catch her performance on the Cripple Creek Stage at 4:45 Saturday afternoon.

Of course, you can hear much, much more music all weekend and it’s not too late to get tickets. I’ll see you there.