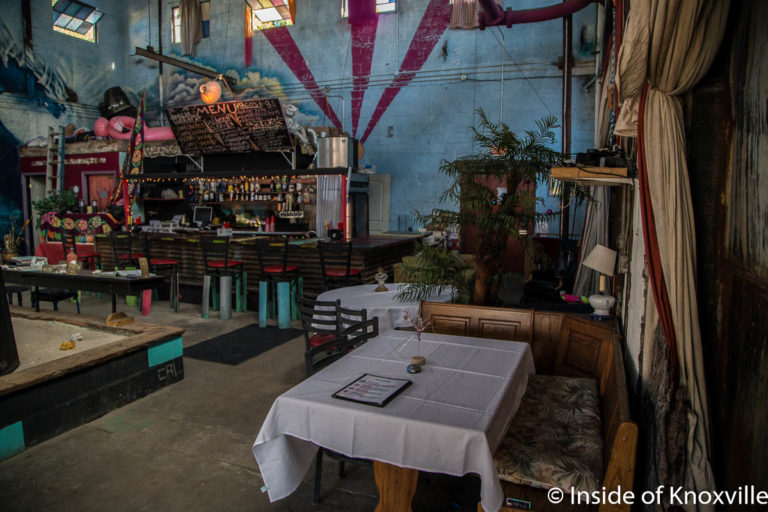 It’s been two years since the opening of Bar Marley and over three since I first announced Caleb Boyer’s plans to open the Island-styled restaurant and bar. After the initial announcement serious obstacles were encountered, including environmental concerns about the site at 760 Stone Street. More than a few people predicted it would never open. But it did.

Recently, I talked with Caleb to see how the first two years have gone. Like with so many topics, he used nautical metaphors. He said, “It’s like when I lived on a boat and people would ask if it was wonderful. Yes, it was wonderful and it was horrible. It’s all about an experience over which we do not have complete control.”

I asked him what had surprised him and he said, “I never anticipated how it would appeal to people on the fringes. People here are simply accepted.” He recounted stories of a homeless man who sometimes carried the garbage out and suffered hallucinations. Other customers are from a completely different socio-economic strata, but they blend in the bar. He said, “Many people appreciate the ‘cultural contribution.’ I’m just trying to share what I love. I did it the way I could.”

He says the two years have been an exercise in observing people’s reactions. Saying people had to learn what to expect, he said there were, “early adopters, people who aren’t afraid of something different. They tried it, some stayed and some moved on.” He also described another element of his customer base as, “intellectual misfits,” and said some came around just to see how it would go.

He said that by the end of the first summer it got so busy he had to hire people as quickly as possible. He said he hired people on the spot as they approached the bar where he was bartending. Without screening, there were misfires. The result was some poor service and unhappy customers. The good news was that the period was so good he was able to catch up on some back taxes and purchase the property outright.

More recently, he’s worked to find good wait staff, kitchen staff and bartenders. He has plans to change the experience to a degree while striving to keep the authenticity of an island vibe. He says it will never be what some people expected – a sanitized version of an island bar like a Margaritaville.

While the original intention was to show people the, “rough cut experience of the islands, some people didn’t understand that everything is sanitary and inspected.” He says he attempted to give people a safer version of what people experience in the islands. He wanted it to have the appearance of danger without being dangerous. He says he’s been at the bar eighteen hours a day for two years to make sure it was safe and done correctly.

He says he’s learned a lot, however, and that he recently began considering changes with the goal in mind of making a larger audience more comfortable by presenting more like a, “real restaurant,” while at the same time maintaining that, “rough around the edges,” feel.

Noting, for example, that up until now, patrons would come in and be offered no assistance and would have to ask questions and find their own way – like would be expected in the islands – he will now offer hosts or hostesses who will be called, “adventure guides.” They will offer to give tours explaining the concept, complete with maps and “passports.” It is intended to be fun, but more approachable.

Other changes include full-service at tables, as opposed to finding your food and then finding a spot to sit. He’s also never intended the bar to be just that, a bar. He’s introducing Jungle Java with morning hours offering a full line of coffee drinks made from South American blends. He’s been collecting cool eclectic cups and he’ll be making Frappuccinos as well as fresh fruit smoothies. He also mentioned a cafe con leche with a tangerine infusion.

He said he’d really like it to be seen as a twenty-four hour coffee bar, mentioning that he’s seen one in Nashville. Baked goods will also be available, provided in the near-term by Kymberle Kaser at the Bread Shed.

He said he considers it the beginning of his next act. He’s re-configuring staff, marking things more clearly and beginning a more traditional advertising campaign. He’s hired a new general manager, purchased new kitchen equipment and will soon be enclosing the kitchen. He’s revamped the menu and is bringing back his jerk chicken and pasta salad. The parking lot will soon be lighted.

He’ll continue featuring live music, but he’s handing off the booking. He plans to continue having an eclectic set of performers and added, “I’ve always wanted it to have an element of art noir like post-war Europe.” He said Blues Monday, which will continue, produced one of the memorable characters from the first two years: a homeless man who he described as, “the best musician I’ve seen live.” An alcoholic, Caleb says, as a result of getting back on stage at Bar Marley, he’s now sobered up.

So, he’s attracted an eclectic clientele. He says he’s had rich and poor, educated and not. Policemen, Marines, homeless people, plumbers and hipsters. He feels that by seeing their similarities it makes people better. It’s part of that elusive Caribbean experience where there are no boundaries and people encounter each other on equal footing.

So, Caleb would love to have you experience his “new” restaurant complete with the new menu, hostesses, waiters, a new menu, coffee service and baked goods and more. He thinks more people will feel at home than has been the case up to this point. A soft opening of the new concept is planned for next Thursday, November 16, with expanded hours open to the public immediately following. Come check out a Knoxville survivor as he begins his second act. Watch the Bar Marley FB page for updates.