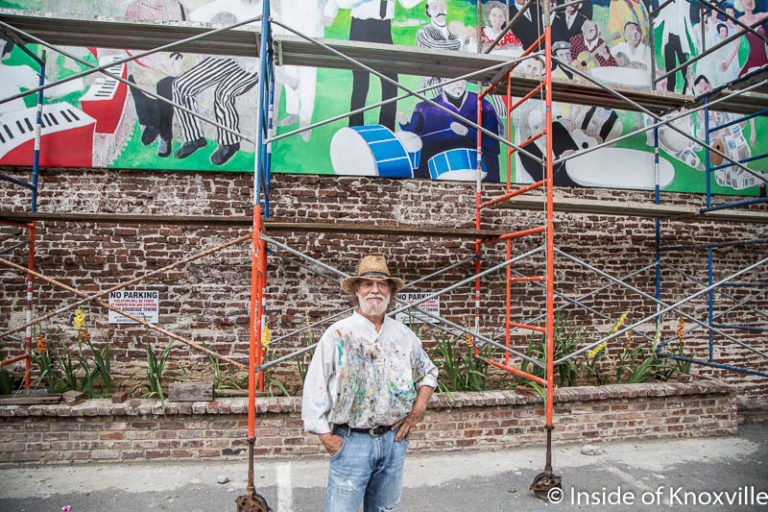 There’s been a lot of action going on in the Old City recently. The streets – first Central and now Jackson – remain in a state of upheaval that will result in buried and modernized utilities, wider sidewalks and repaved streets. Construction on the Crozier is now progressing rapidly and other plans are being announced. New businesses have opened in recent months – Rala moved to the Old City – Merchants of Beer has been a success from the beginning and Body Mind Realign opened months ago. Post Modern Spirits and Pour are coming soon.

In the middle of all the construction noise and dust it might be easy to miss another important development. It’s a quieter pursuit at which you’ll find artist and muralist Walt Fieldsa at work. Starting in April he restored the train mural you’ll see in what is currently the Lonesome Dove courtyard. He painted the original mural in 2001 with the support of Keep Knoxville Beautiful. Noting its deterioration after fifteen years, the organization began raising funds in late 2016 to fund the restoration.

The mural, located on a building currently owned by Laura and Shawn Lyke, who have been very supportive of the project and assured its protection, needed significant help. Restored at a cost of around $4,500, financial support was provided by many individuals and by significant gifts from the CBID, Historic Southern Railway Station, and Blue Slip Winery & Bistro. The artist returned in April , “repairing cracks, securing plaster, brightening faded colors, and sealing the public artwork to protect it against future damage.”

The press release pointed out that, “The Historic Train Mural was created during a time when the Old City was nearly derelict. The site was deliberately chosen both to memorialize the nearby train line, which transformed Knoxville from a small river town into a major wholesale center, and to elevate the surrounding area.” Keep Knoxville Beautiful Executive Director Patience Melnik added, “It not only commemorates the dramatic impact the railroad had on our city, it preserves and celebrates a time not very long ago when a different type of pioneer was transforming our downtown.”

The context of that planned restoration provided additional urgency: a nearby mural, the Knoxville Music History Mural located on Jackson Avenue, just across from Barley’s and painted in 2000 by a team led by Walt Fieldsa, had been painted over. Reaction was swift and very negative on social media. In the linked article above, building owner Leigh Burch III said the mural had been defaced and he felt there was no other option.

Fortunately, this past winter wheels began to move in the direction of returning the mural to its original location. Walt told me that he was surprised at the intensity of the reaction to the destruction of the mural and that so many cared, but he admired that, “Knoxville will take care of Knoxville.” Saying his, “message is to avoid cultivating conflict,” he began to reach out to those involved.

He sat down with Mr. Burch and told him the mural could still be restored, despite the coatings. He’d researched mural restoration and talked to people across the country, ultimately settling on a citrus solution which removes a layer at a time. Understanding, “many people felt a strong connection with the work and wanted it preserved,” he readily agreed not only to allow its restoration, but to pay for the work, himself.

Portraying such a wide range of Knoxville’s musical past, it really is an important reminder of those whose music has graced the city. In one of my early articles, as I got to know downtown better, I covered it on the blog. There are, as I noted then, a number of easily recognized artists, such as Dolly Parton, the Everly Brothers, R.B. Morris, Brownie McGhee, along with many to whom the years have not been as gracious and their stars have faded.

He’s also repairing the wear that resulted from the sixteen years that had passed, such as cracks in the building which he has filled with, “acrylic golden paint.” When the work is complete he’ll coat it with a barrier and a lacquer which should last forty years. He said at that point, the lacquer should be easily removed, leaving the protective barrier in place and it can be re-coated. In other words, there is no reason the mural shouldn’t last as long as the building.

He expects the work to be completed by the end of July or August, though he says that depends on weather. Walt spends most of his time at his country home, which he built himself, working on a project to prevent erosion of the river bank by filling old tires with rock along the bank. It’s an odd artistic endeavor that he tells me has been appreciated by at least one passing canoeist who pulled ashore to tell him, with great emotion, that his work was beautiful.

In recent years he’s been working more with a palette knife, so he’s had to find his painting groove, again, though his hand was also in the Visitor Center mural that took shape a couple of years ago. He also painted the well-known music mural on the old Roy’s Records building in downtown Maryville.

He seemed content enough as I left him at work, though he’d told me he’ll be happy to get back out in the country. He’ll leave having accomplished what he set out to do: The mural will be restored, but more importantly, a contentious moment in our recent history will be replaced with a harmonious new chapter in a seventeen-year journey of remembering both the musical artists of our past and the artists, such as Walt, who make the city a better place today.

Note: He is interested in images of the original mural in order to get as many details from the original as possible. If you have a high quality image, he’d appreciate hearing from you at art360@bellsouth.net.

Second Note: Join me and co-host JJ Pershing on WUTK, 90.3 (live streamed at http://wutkradio.com) at 10:00 AM on Sunday morning when my guest will be William Mahaffey who will discuss his efforts to bring independent cinema to the Happy Holler area of Central Street.