I’d intended to do only one business update, but I realized I have a bit more information than I realized. In this post I’ll share some of the pictures I made on First Friday of some businesses that are new or simply under-publicized.﻿ 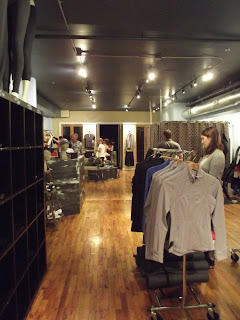 I stopped into the brand new Lululemon situated in the same spot Unarmed Merchants occupied until just a few weeks ago, which illustrates one of the trends I’ve noticed: As businesses disappear, new ones are immediately opening at the vacated location. It hasn’t always been that way and, while I hate to see a business close its doors, I take it as a good sign that there are people apparently lined up to take their place.

Lululemon sells athletic clothing of a sort and seems to be quite involved in yoga and such. This is their second store in Tennessee, with the first being in Nashville. They had a musician in the store, which is always a good sign in my book, but he seemed to stroll and randomly strum, never quite breaking into an actual song. He looked so stylish, I finally wondered if he wasn’t perhaps a model who was told to hold a guitar.

I also stopped by Crush on Jackson Avenue and took a few photographs of their vintage attire. There were people moving about and they seemed to be having a good night. The also, like many businesses downtown had art displayed on their walls that was mostly of a grotesque nature, though almost in a cartoonish sort of way.

Another point of interest for me along my way was Boyd’s Jig and Reel. My first impression wasn’t that different from others I’ve heard: It seems like a pretty cozy place to hole up and pass a night. There was a decent crowd inside, but it certainly wasn’t wall-to-wall people. There seemed to be something missing. I’m not positive ﻿﻿﻿﻿﻿﻿﻿what it was, but the music had not started and that may be what gave it a little hollow feeling.

Finally, I hung outside Boldure Gifts, which is a small gift store on Central in the Old City, with artist Amanda Childs. Her art was arrayed on the sidewalk and she offered me a beverage and chatted about the gallery she is joining. I sounds like a bit of a co-op with multiple artists displaying their work in the space. It’s called “Art on the Tracks” and its unlikely location is Powell at 1717 Depot Street.

In my next post I’ll talk about some of the other business developments I haven’t mentioned in this space.