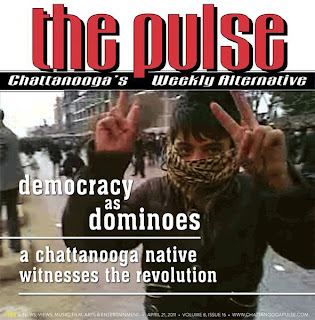 While to me the differences were much more vivid, there were some similarities between downtown Chattanooga and Knoxville. Several small similarities were almost funny. I tend to think of the Metropulse as our small, independent alternative paper, but in fact, it is owned by Scripps, a major newspaper conglomerate. I was reminded of this fact when I saw The Pulse, a free alternative weekly paper available at locations all over downtown Chattanooga. Even some of the content was the same.

I stopped and laughed on the street when I saw their “Downtown Mart,” which has wigs in the window. Of course, we are losing our Jay’s Megamart, but they were so similar it was sort of like seeing your reflection ina  mirror when you don’t expect to and thinking, “I know that person.” I almost wonder if they have the same owner.

While they do not have the number of large buildings downtown that we have, they have comparably empty or forsaken buildings to our Pennys Building or the large buildings just off Summit Hill on State Street. There are also large stretches on those two main roads which are either empty or occupied by parking lots. I suspect this is where the large buildings used to sit. If so, it appears we’ve saved more than they have saved, though we lost our share. There were many boarded-up, vacant smaller buildings in evidence. Both places have their blight and empty buildings to deal with.

Knoxville has a significant number of homeless people downtown, but I saw the same thing in Chattanooga. I was approached and asked for money, just as I have been in Knoxville and, in fact, the woman who approached me used to live in Knoxville and knew all the various support agencies in our downtown. She lived in subsidized housing downtown and, if it was the building I think it was, it reminded me of our Summit Towers. ﻿

﻿They are struggling to maintain a presence for books downtown, just as we have been. I saw two book stores almost across the street from each other and got excited, only to return later and find that one has gone out of business and and the other might consider that option. It was difficult to walk very far into the store because of the debris piled in every direction. It felt like a warehouse with antiques and old, not so attractive books in an extremely disorganized space. For now we are similar in the book arena, but given that we have Central Street books just out of downtown Knoxville proper and Union Avenue books on the way, this will soon change from a similarity to an advantage for Knoxville.

They also have a cool, small park and so do we. Ours is bigger and more of a typical park while theirs is more a plaza, but at least each had a pleasant spot to bring the family or a special somebody and spend some time.
So, there you are: the similarities I found were largely the negative ones, homelessness, decay, a lack of books, with a nice park or plaza for each thrown in for good measure. Tomorrow I will examine the differences which I found most striking and draw a few conclusions.