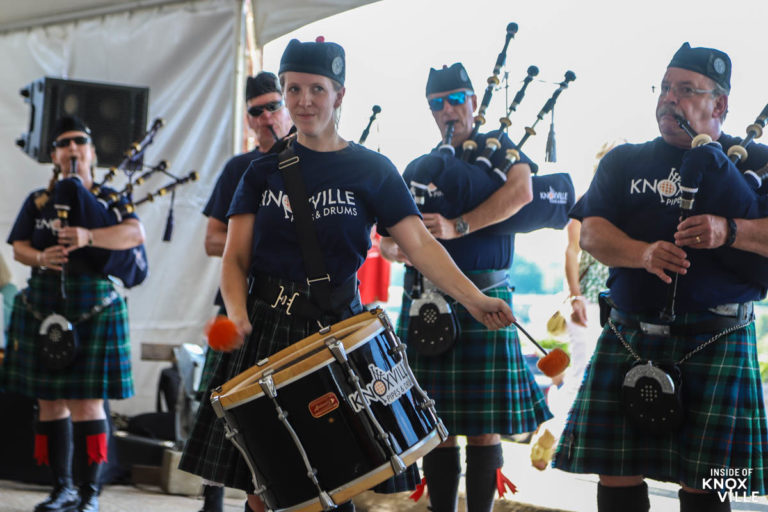 Thirteen years living downtown and I’d never been to Irish Fest until this weekend. Was it the August heat that kept me away? The trek up the hill or that it falls in travel season? I’m not sure. But I’m glad I made my way up the hill this weekend and I appreciate the weather gods making arrangements for me not to fry once on the summit.

As with so many events, no one had attended for the last couple of years because of a certain pandemic. It’s still around, but as so many festivals have concluded: the show must go on. And the crowd seemed ready to respond with a relatively large crowd turning into a very large crowd by mid-evening.

The festival is packed with all things Irish. Want Irish food? You got your shepherd’s pie (beef and vegie), corned beef and cabbage, reubens, bangers and chips and your Irish coffee. The sound of the Knoxville Pipes and Drums announced the point as it coiled down from the hilltop and greeted everyone making the climb.

A silent auction was held inside the fellowship hall and hundreds (thousands?) of items were auctioned, ranging from the sacred (wall hangings of angels and saints) to the profane (Irish whiskey). Or maybe that’s just a good balance. One of my favorite items was a room screen painted with scenes from France. I just couldn’t quite imagine where that might go in my condo.

The music (and dance), however took center stage. It was actually stages, as the Pub Stage was set up behind the church, while the Street Stage occupied the center of Vine in front of the church. Music or dance flowed on each stage, offering the crowd a choice, with some of the more popular acts (think bagpipes and dance) taking turns at each stage.

Red Haired Mary opened the Pub Stage, while Knoxville Pipes and Drums kicked off the street stage. The Knoxville Area Dulcimer Club (which I really enjoyed) played a set and the Tennessee Irish Dancers danced a set. It was nice to see younger generations learning older traditions, as the dancers were all young girls. The always lovely Nancy Brenan Strange played a set and Wild Blue Yonder played a couple. Jeff Nelson closed down the Street Stage and crowd favorites Four Leaf Peat and the Missing Goats closed the festival on the Pub Stage.

Through it all, the festival organizers offered two different tours of the church, with lots of history, and managed to squeeze in mass for their parishioners. It all added up to a lot of activity in a small spot. If you’ve never taken the opportunity to enjoy a bit of Irishness on the hill, I’d encourage you to consider joining the fun next year.