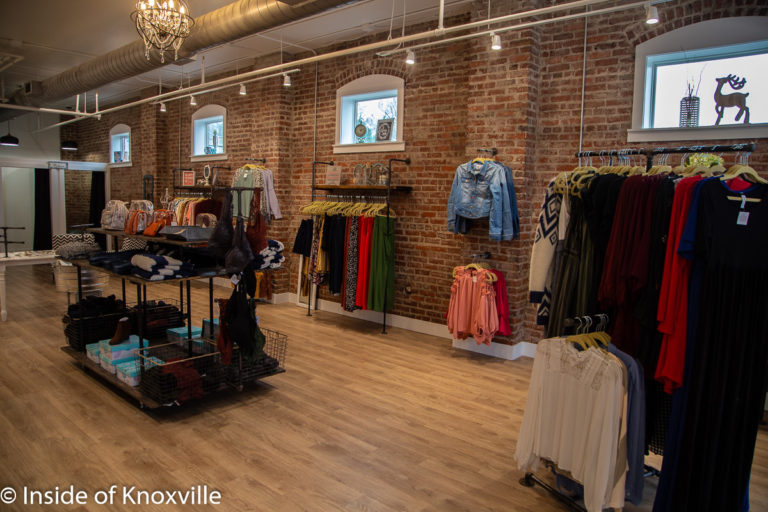 Whitney Jenkins was excited and optimistic when she realized her dream and opened a brick and mortar fashion boutique in January 2020. Sweetbriar Boutique was a culmination of that dream and she waited to see where it would take her. She could not have known that circumstances a world away, as well as very personal circumstances would make the picture ahead much more complicated. I sat with Whitney and her husband, Michael, to learn more about the journey that has brought them to the point of deciding to close the business.

Whitney opened the store in mid-January and she said the business went well for the first weeks. Business seemed good, with great support from the south Knoxville area. After the hard closure in March, she re-opened to find customers much slower to return due to the uncertainty. She said she feels that people generally didn’t spend as much money and the money they did spend wasn’t on clothes. Summer was slow, as well.

The holiday season brought customers back, even though the virus was peaking again. She said she thinks customers felt more safe in a smaller environment shopping for gifts and there was a strong push to support local merchants, as well. “November and December were probably our best months, but then after the holidays, it slowed down, again. Spring was decent, but then once the Delta variant hit, we saw everything get slow again.”

Compounding the professional struggles, was the birth of a second child. Reid was born in May 24, but wasn’t due until August. At 2 lbs., 10 oz., he struggled and had two early hospital stays. He’s recovered and doing well, but the pregnancy, early birth, and struggling business took its toll on the family. Then there were supply-chain issues involving merchandise. Michael said, “It’s been a long, adventurous couple of years . . . it’s been challenging . . . and taxing. Emotionally, it got really tough, which then turned into being physically tough and demanding.”

The couple reached the conclusion that the best path forward for their family was to no longer have a brick and mortar store. They decided to transition to an online store only to give them more flexibility and time with family. “Ken and Debbie (Ken and Debbie Hill, the owners of the building) have been phenomenal to work with . . . When we we started this journey with them, Reed wasn’t a thought, nobody knew what COVID-19 was, so there have been a lot of changes. They have been very understanding of the current situation.”

Whitney said, “We can’t thank the people who supported us enough. We definitely had supporters from the surrounding area. I’ll miss seeing them. We’re super grateful for the support they showed us.” Brian added that their eyes had been opened to how tight-knit the community is. “When Reid was born, businesses brought meals, Kendale (owner of Simpl) was very gracious, and South Coast Pizza was very kind.” Whitney said it went beyond the restaurants.

“The businesses down here want to see the other businesses succeed,” Whitney said. “They aren’t competing with each other. They want every business to do well.” The two said that many aspects of the last two years have been positive. They feel they’ve learned a lot and feel great about south Knoxville. Michael said, “We’ve grown a lot as individuals . . . it comes down to family comes first . . . That’s where we want to focus our energy.”

Whitney concluded, “It’s opened our eyes a lot more to supporting small businesses.” She said that was always something they tried to do, but they now understand the importance more than ever. “Anything that is available locally, even if it is a couple more dollars, it’s worth it.”

The current plan calls for continuing at 820 Sevier Avenue through the end of the year and then transitioning to online only at the first of the year, but the couple said they will remain involved with the community. The online component is already built into the website and is fully functional and ready to move forward.

That leaves a great move-in-ready space at 820 Sevier Avenue available for a new business starting around the first of the year. It has over 1300 square feet and 12 foot ceiling. For more details, check out this link and/or contact Ken Hill at 865-604-5950. (Tell him you saw it here!)