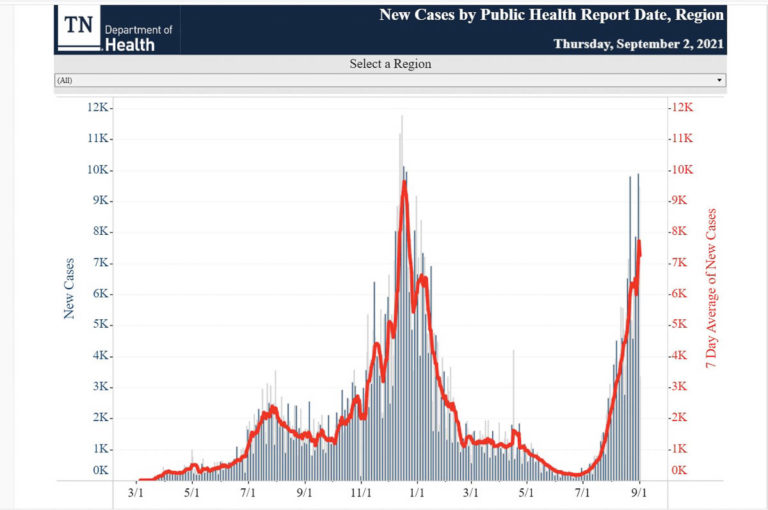 Welcome to the Friday update. In short, the news continues to not be good, with Tennessee briefly reported to have the worst rate of spread in the country, which has one of the worst rates of spread in the world. On the upside, the weather has turned much nicer and the trails beckon. I had a wonderful hike yesterday which was a great way to recharge. I recommend it.

About 220,200,000 cases of COVID-19 have been confirmed around the world, along with 4,561,000 deaths. 18.8 million people have active cases of the virus and almost 4.5 million new cases were reported this week. The good news is that the number of new cases dropped by about 3% from the week before. The number of active cases rose by about 500,000, which is less than the 600,000 increase the previous seven days.

New cases averaged 636,000 per day over the last seven days, compared to a daily average of 654,000 the week before. It’s another indicator that the third global wave of cases may have peaked. Deaths also show some sign of having peaked, for now, with 9,400 people dying from the illness over the last seven days, compared with 9,876 each day the week before.

40,521,000 cases of COVID-19 have been confirmed in the U.S. The U.S. remains first in the world for total cases and fifth among modestly populated countries in per capita cases. There are roughly 8.7 million active cases of COVID-19 in the U.S., up about 700,000 from last week. 663,000 Americans have died of the illness, including 8,850 people over the last seven-day period. The U.S. leads the world in total deaths from the virus and remains 18th in per capita deaths among populous countries.

While global deaths and new cases decreased slightly, both cases and deaths increased by 5% in the U.S. over the last seven days. The U.S. is now averaging 164,185 new cases per day, up about 11,000 per day over last week and like the rate in late January. The rate of increase continues to slow over the last several weeks, from 23%, to 10%, 7% and now 5%.

The U.S. is averaging 1,521 deaths per day, similar to that in early March of this year. This is based on the New York Times database. I mention this because I have used the Worldometers seven-day average for cases and deaths since the beginning of my reports and I now feel the NYT is more accurate on their reporting of deaths. The two diverge by 200 – 300 deaths per day, with Worldometers being lower.

The difference? Florida is reporting about 8 to 10 deaths per day, which is the number Worldometers is using. The truth is that Florida has changed the way it reports deaths, so that most deaths are reported slowly over subsequent days. For example, they initially reported 8 deaths on August 26. That number has been shifted retroactively to 138 and is still rising. For these reasons, Worldometers current daily average is not accurate, as it excludes most deaths from the state that is leading the country in deaths. The Miami Herald, in an article published yesterday, pegs the number of deaths per day in the state at 325 per day.

The five states with the worst current infection rates are, in order South Carolina, Tennessee, Kentucky, Alabama, and Mississippi. For full vaccination rates in the U.S., these states, in order, rank 40th, 41st, 27th, 49th, and 50th. The five states with the lowest rate of spread this week are Connecticut, Maryland, Michigan, New Hampshire, and Maine. For full vaccination rates, these states rank 2nd, 7th, 25th, 11th, and 4th.

About 446 million doses of the vaccine have been given in the U.S., including about 11 million in the last week. The rate of 907,000 per day this past week is up from 875,000 per day a week earlier. About 62% of the U.S. population has received one shot and 53% are fully vaccinated, up about 1% each from a week ago. Vermont, Connecticut, Massachusetts, Maine, and Rhode Island lead in the percentages fully vaccinated. West Virginia, Idaho, Wyoming, Alabama, and Mississippi have the lowest percentages of fully vaccinated residents.

The state of Tennessee has recorded 1,064,427 cases of COVID-19 since the beginning of the pandemic, along with 13,554 deaths from the illness. New cases are averaging 7,228 per day, up from 6,695 a week earlier. This week, Tennessee moved from the fourth worst rate of spread to the second-worst rate of spread in the U.S. and has seen a 52% increase in rate over the last two weeks. The current rate is like that of late December 2020 and is close to five times the rate of new cases in the state one year ago on the same date.

In the last seven days, Tennessee reported its sixth and seventh highest single-day totals of the pandemic on back-to-back days, including 9,636 (8/31) and 9,419 (9/1). The reported number of tests hit a dramatic drop yesterday, likely because test availability is currently limited and test reporting times are slowing. The state most recently reported a 24.79% positive test rate, up from 19.5% a week ago. Epidemiologist would suggest this means we are missing many cases.

Over the last seven days, the state has averaged 36 COVID-19 deaths per day, up from 31 a week ago and 26 each day the week before. The current rate of deaths is like that of early March and is about 75% higher than the same day last year. 36 deaths were reported yesterday.

The rate of new hospitalizations continues apace and is one of the most alarming data points in our current situation. A net of 164 new hospitalizations were reported yesterday, bringing the current totals to 3,538 COVID-positive patients in Tennessee hospitals, with 967 in ICUs and 702 on ventilators. Last week the corresponding numbers were 3,030, 886, and 564 respectively. ICU capacity is still listed at 94%, which I don’t completely understand, given the increase of 81 in that setting. I can only conclude that ICU capacity is being ramped up. The current report is that 116 ICU beds are empty of 2,046 in the state.

The current number of hospitalizations has surpassed the peak set last January, with the patients continuing to be younger, more ill, and largely unvaccinated. Pediatric hospitalizations also continue to increase, with 83 COVID-positive children in the hospital, 20 in ICUs, and 10 on ventilators. These numbers are up from 67, 16, and 6 last week. Pediatric beds are at 85% capacity, up from 80% a week ago.

49.9% of Tennesseans have gotten at least one shot, while 42% are fully vaccinated, up from 48.8% and 41.6% a week ago. The state ranks 43rd in the U.S. for first vaccinations and 41st in full vaccinations, up from 44th and 42nd a week ago. 139,400 vaccinations were given in the state over the last seven days, up from 137,200 reported last week. The rate continues to be far too slow to vaccinate an adequate percentage of the population prior to next year.

Over the last seven days, the Knox County Health Department has reported 2,509 new confirmed cases, up from 1,877 the week before. An additional 780 probable cases have been reported, up from 759 the previous week. Totals now include 50,591 confirmed cases and 11,584 probable cases. 4,920 county residents have an active case of the virus, up almost 300 from a week ago and the highest number reported in Knox County since January 13 this year (4,936).

Demand for testing has surged in the county and, at about 12,000 over the last week, is close to the peak rates last December. Not unrelated to that surge, reporting times are slowing, recently moving from 1.37 days turnaround time to the current 2.94 day turn around. This, unfortunately, makes additional spread likely. The current positive test rate in the county is 22%, up from 21.7% a week ago.

In the 19-hospital regional area, 657 COVID-positive patients are currently admitted, up from 567 last week. ICU and ventilator numbers among this group are 158 and 107, up from 154 and 101 last week. The current number of hospitalizations represents the third highest single day report of the pandemic, only exceeded by January 7 (671) and January 4 (659).

The current number in ICUs or on ventilators is a new record. There are 9 ICU beds available of the 317 in the region. As I said in the state report, I’m not sure how that is true, as we have three more beds available than last week, with four more people in ICUs. I’ve included total numbers of beds to see if that is changing and more beds are being added, which would be the most logical explanation.

The University of Tennessee, which shifted this week from a weekly reporting format to a daily (on weekdays) reporting format, is currently reporting 256 active cases, up from 116 reported here a week ago. Between reports, the university number rose to 267. These numbers are similar to mid-September of last year and far exceed any numbers reported during spring semester.

UT Medical Center is reporting 155 current COVID-positive patients, up from 130 a week ago. They report that 87% of their COVID-19 patients are unvaccinated. The average age of hospitalized COVID-positive patients is 56. East Tennessee Children’s Hospital, which reports only on Wednesdays, reported 11 children have been admitted in the last week with COVID-19, and there are currently 7 in the hospital, with one in ICU. The number admitted is the same as last week, but the previous report indicated a census of only 4 inpatients, with one in the ICU.