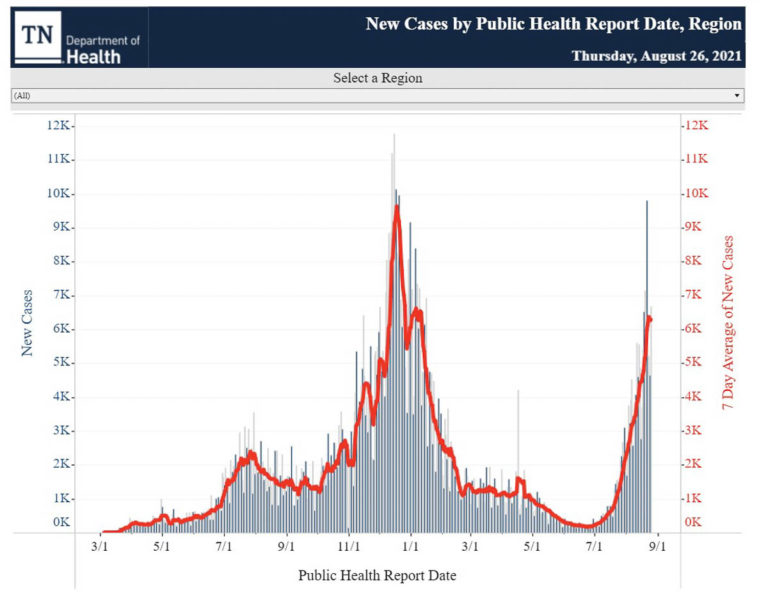 Welcome to another Friday report during what is quickly rivaling the worst period we’ve yet seen of the pandemic. As you can see from the news links in the local and state sections below, the pace of news has been rapid over the past week. With state and local numbers nearing peaks seen only last winter, this will likely continue. Given this, I plan to give a state and local update on Tuesdays, in addition to the somewhat larger Friday update. As was the case early in the pandemic, I feel the local and state impact requires more coverage.

I also want to mention donations and may do so a couple of additional times in the next few days. It has been a year since I introduced the option of making donations and there have been more problems than I realized with the software. While the initial support was great, all donations except subscriptions stopped over the months and I only recently understood that was because numerous attempted donations over the last year which were rejected.

It’s working now for all single donations via PayPal or credit/debit cards. Recurring donations or subscriptions are working for debit or credit cards, but not via PayPal at the moment. The capacity to update or change credit card numbers or to cancel donations has been restored. While some advertising has returned, much of it has not, and if you value the work and would like to support the site, I would appreciate it. I’m determined to keep the content flowing and free and this helps. For those of you who have made donations and, particularly, recurring donations over the last year, I thank you very much.

The link is always at the top of the page, or you can follow this link. Please let me know if you have any trouble with the software (Knoxvilleurbanguy@gmail.com).

About 215,700,000 cases of COVID-19 have been confirmed around the world, with over 18.3 million cases currently active. Just under 4.6 million new cases were reported in the last week and while the number of active cases increased by about 600,000, if there is any encouragement, it lies in the fact that this week’s new cases totaled .6% fewer than last week. 69,129 deaths from COVID-19 were reported this week, up .7% from the previous week. Just under 4.5 million deaths have been attributed to the illness.

The current average of 654,000 new global cases each day is up only 1,000 over last week and is showing signs of having peaked for a third time. On average, 9,876 people died each day from COVID-19 over the last week. While this is about 230 more than the previous week, the curve has slowed and shows signs of leveling off.

39,342,000 cases of COVID-19 have been confirmed in the U.S., which remains the world leader in total cases and remains fifth in per capita cases among countries with more than 1 million in population. There are just under 8 million active cases in the U.S., up about 800,000 from a week ago. Roughly 652,000 Americans have died from COVID-19, more than any other country and 18th per capita in the world. Just under 7,000 Americans died from the illness this week, an increase of 9% over the previous week.

There were just under 1.1 million new cases in the U.S. this week, an increase of 7% over the previous week. Again, if there is encouragement, it lies in the fact that the increase is slowing. Over the last three weeks, the increase has been 23%, then 10% and now 7%, indicating, perhaps, that we are near a peak in this wave.

New cases average 153,721 per day this week, up from 140,299 the week before. The new case rate is like late January. One year ago today, the U.S. was averaging 44,130 new case per day. Last Friday, the U.S. reported 182,528 new cases, the highest total since January 22 (194,537). Both case and death totals are increasing retroactively as some states report only once a week and Florida, which is averaging around 200 deaths a day reports them so retroactively that they reported just 8 yesterday.

The death rate continues to slowly rise, with an average of 995 per day, compared to 769 per day which I reported a week ago. This is more than the 9% noted above because last week’s reported average was increased retroactively due to the reporting issues noted above. The current death rate resembles that at the end of March 2021 and is roughly the same as this time last year.

Tennessee and Kentucky have bumped Arkansas and Alabama from the list of states with the current worst infection rates. The current worst five in order include Mississippi, Florida, Louisiana, Tennessee, and Kentucky. For full vaccination rates in the U.S., these states rank 49th, 21st, 44th, 42nd, and 28th. The five states with the lowest infection rate this week are Maine, Maryland, Connecticut, Vermont, and New Hampshire. Their full vaccination rates rank 4th, 6th, 3rd, 1st, and 10th.

About 435 million vaccinations have been given in the U.S. About 73.5% of U.S. adults have received a first shot, while 61% of the total population has gotten at least one shot and 52% are fully vaccinated. Vermont, Massachusetts, Connecticut, Rhode Island, and Maine are the most vaccinated states, while Alabama, Mississippi, Wyoming, Idaho, and West Virginia are the least. National vaccination rates have improved from about 500,000 per day in mid-July to about 875,000 per day currently.

The state of Tennessee charted its 1,000,000th confirmed COVID-19 infection this past week, joining a group of one-dozen such states. Tennessee currently reports 1,013,943 total infections and 13,304 deaths. New cases are averaging 6,695 per day, up from 4,774 a week ago. As noted above, Tennessee now has the fourth worst rate of spread in the U.S. and has seen a 67% increase over the last two weeks. The current rate is like mid-January and nearly triple the peak from last summer.

On August 22 (last Sunday), Tennessee reported 9,825 new cases, the highest single-day total since December 21, 2020 (9,977). The number is the fifth highest single-day total of the pandemic. Even though testing has rebounded to typical numbers for earlier this year, the most recent positive test rate reported for the state was 19.56%, meaning many cases are likely being missed.

Over the last week, the state has averaged 31 COVID-19 deaths per day, up from 26 per day last week. The current rate is like that of early March. 48 deaths were reported yesterday.

The rate of hospitalizations for the state has not slowed and the numbers continue increasing. 3,030 COVID-positive Tennesseans are currently hospitalized, with 886 in ICUs and 564 on ventilators. Last week the corresponding numbers were 2,572, 767, and 474. As you can see from the links below, the week was filled with news of struggling hospitals at or near capacity. ICU bed availability has dropped from a statewide average of 7% last week to 6%.

As is the case nationally, the number of Tennesseans opting for the vaccination is increasing. 48.8% have had at least one shot and 41.6% are fully vaccinated, up from 47.6% and 40.7% a week ago. The state ranks 44th in first vaccinations and 42nd in full vaccinations among the fifty states. The state dropped a spot in ranking for first vaccinations since last week. Most encouraging, 137,200 vaccinations were given over the last week, up from 118,500 last week and 100,300 the week before. Unfortunately, we are bumping up about 1% a week at that rate and it would take into 2022 to reach about 70%.

As of yesterday, the KCHD reports there are 3,669 active cases of COVID-19 in Knox County, up from 2,509 a week earlier, a 46.2% increase in a week. This is the highest number of active cases in the county since January 20 (3,828). The positive test rate for the county over the last seven days is 21.7%, or more than four times what it should be to feel confident we are finding most cases. It has increased from 16.7% last week. As of the day of this report, increasing numbers of people are unable to get testing or an appointment for testing due to overwhelming volume. Prices are reported at $150 to $175 for a test at some walk-in clinic locations.

In the 19-hospital regional area, 567 COVID-positive patients are hospitalized, up from 439 a week ago and 333 the week prior. 154 are in ICUs and 101 are on ventilators, up from 96 and 46 last week. As has been the case throughout this surge, around 85% of all hospitalized COVID-19 patients are not vaccinated. As of yesterday, there was a total of six ICU beds available in all of the 19 regional hospitals combined.

Knox County continues to have better vaccination rates than the state, with 53.17% having had a first vaccination and 48.17% fully vaccinated. These percentages are up marginally from 52.53% and 48% last week. Clearly the pace will not allow further vaccinations to impact this wave of the virus. 9,317 vaccinations were given over the last seven days.

Various institutions have started reporting numbers this week, including Knox County Schools where 219 active cases were reported on Monday. The number rose each day through the week to 276 on Tuesday, 601 on Wednesday, and 712 on Thursday. The numbers include 648 students and 64 staff members. 8,600 students were out yesterday, though the KCS are not providing information regarding how much of that is connected to the illness.

UT is providing weekly numbers on Monday morning, and they reported 116 active cases, up from 44 a week earlier. That number of cases is larger for the University than any single number reported in the spring semester and going back to last September.

As of yesterday afternoon, East Tennessee Children’s Hospital reported having served 11 COVID-19 positive children in the previous seven days. As of that day, they had four inpatients and 1 in ICU.