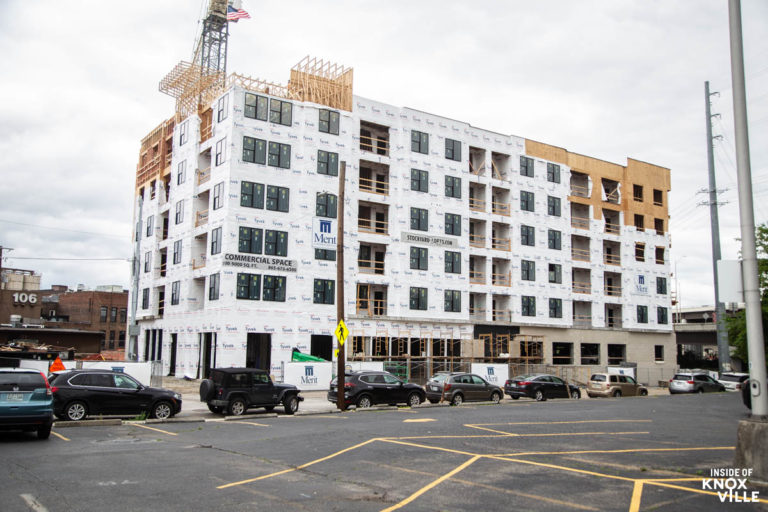 Development on any scale is almost always a challenge. Some challenges are anticipated, while others are unpleasant surprises. From a simple bathroom renovation to a renovation of an old building or construction from the ground up, rarely is a project as simple as it first appears. Sometimes there is a pandemic.

Two of the major developments underway in the downtown area were announced before the pandemic and have moved forward during this strange era in our history. Both located in the Old City, one is a ground-up construction, while the other is a major renovation project of an old building.

Tim Hill is renovating the buildings at 125 East Jackson, formerly the Bowery and NV Nightclub, among many other businesses over the years. The original plan is detailed here, as the project was announced over a year and a half ago. As announced, the project would include two restaurants, a courtyard on the ground floor and office space above.

I spoke to Tim in mid April and he said, “We have encountered some structural issues resulting in considerable delays. We should be back to construction within the next 10 days. The project should be completed near year end.” The photographs included here show the extent of the work on the building closest to the street, which is looking more like a reconstruction than a renovation.

Another project in the Old City, spearheaded by Leigh Burch and Daniel Smith, is Stockyard Lofts, first announced nearly four years ago. Originally anticipated to be completed in the summer of 2019, construction was slow to begin. Once completed it will include a commercial space, a parking garage for residents, and over 150 apartments  in the six story construction. It is located adjacent to the Crozier, which was also developed by the group.

I spoke to Daniel to get an update on the progress and I started by asking if they’d experienced price increases due to the rise in prices for construction materials.

He said “We’ve certainly had some challenges with wood price increases,” but he added that other than wood, they were fortunate to have started before COVID-19 hit and so they were “able to secure material before the major supply chain disruptions had occurred over the last six months,” such as pvc, wire and other materials

We have the roof on the building and it’s mostly dried in (likely complete next week), so that is a major milestone. We expect to have the first set of units available for move in this October. The building should be fully complete (minus retail build out) before Christmas. Pre leasing has begun and the interest and early indication of demand is encouraging. We’ve had a lot of people move into town in 2020 and it will be interesting to see if that trend continues.

Eighty percent of the units will be one bedroom and eight different configurations are included, due to the odd shape of the lot. Sizes will range from about 600 square feet up to over 1250 square feet. If you are interested in an apartment or in the retail space, you can find more information here and here.