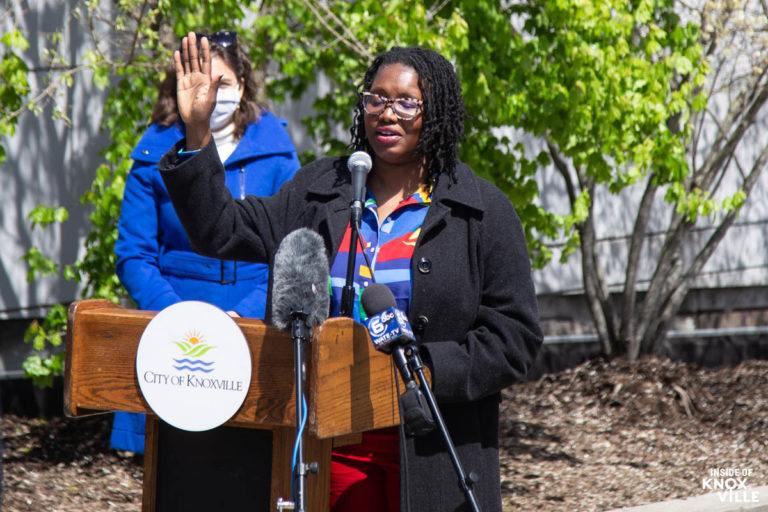 April is National Poetry Month and as a part of the celebration, Knoxville’s Poet Laureate, Rhea Carmon, in conjunction with the City of Knoxville and Knoxville Area Transit, is introducing Poetry in Motion. Carmon read some of her poetry at a kick-off event at the KAT station late last week. She was introduced by Mayor Kincannon who recounted the joy of encountering art in unexpected places.

I reached out to Ms. Carmon to learn more about the journey that brought her to this place. Upon learning that she teaches middle school, I was surprised to find that she teaches math, not English. She laughed and said I’m not the first to notice. She said she loves math and, to her, science, poetry and math belong in the same group.

Originally from Detroit, her family moved to Huntsville, Alabama when she was young and it was U.T. that brought her to Knoxville. She obtained a B.S. in Biomedical Engineering from the university and worked in Oak Ridge as a computer engineer. Eventually returning to school, she obtained an M.Ed. in Math Education. She’s taught at Austin East High School, Emerald Academy and Robertsville Middle School in Oak Ridge, where she currently works.

While she says she always liked poetry, she never particularly enjoyed English classes or grammar. She began writing poetry as a way to connect to the subject. At her school, she was made to memorize poetry and fell in love with the works of Langton Hughes, Nikki Giovanni and others. She could never have imagined that years later she would open for Ms. Giovanni.

While attending undergraduate school, she became involved in the local slam poetry community and fell in love with it. “It lets you know if you can move a crowd. I love being able to do that.” She says she never thought much about taking her poetry beyond live performance, but her path intersected with Marilyn Kallet, retired U.T. professor and the previous poet laureate. “She told me I could do more and I started believing. She encouraged me to publish my poetry.”

Last year, as she was attempting to publish a chap book (she’s now written three, plus three CD recordings), she reached out to Ms. Kallet for advice on how to get it published. On that phone call, Marilyn told her it would be easier to be published once she was announced poet laureate. She laughed and told Marilyn that would never happen. Marilyn told her it had already been decided.

She became Knoxville’s third poet laureate in June of 2020 (following R.B. Morris and Marilyn Kallet) and she says some of the months since have felt almost like she wasn’t really doing the job. The appearance last week was her first official appearance in her capacity, due to the pandemic. She said it feels like she is just getting started and she hopes to have her time extended.

“I want to generate conversations about what needs to change and about how we can bring unity.” She intends to bring spoken word plays to the community and is working on a new book telling the stories of important people of east Knoxville, through poetry. She feels strongly about mentoring and is working with a youth mentoring program. She’s written a grant to support a video project for next National Poetry Month, so that it can live on social media. She wants to video a series of prominent people discussing what poetry means to them.

She’s hoping to expand her public speaking exposure and she loves doing poetry workshops with students. You can find her chapbooks on Amazon (they are not currently available locally). Follow her on Facebook (you’ll find her there under her performing name “Rhea Sunshine”), on her webpage, and on Instagram where she recites a poem every Sunday.

For the Poetry in Motion program, local poets will present pop-up performances at transit stops on Mondays and Fridays through out the month. Billboards will also be placed around the city with poetry by Carmon and the previous poet laureates of the city. You’ll find a list of poets and locations here.