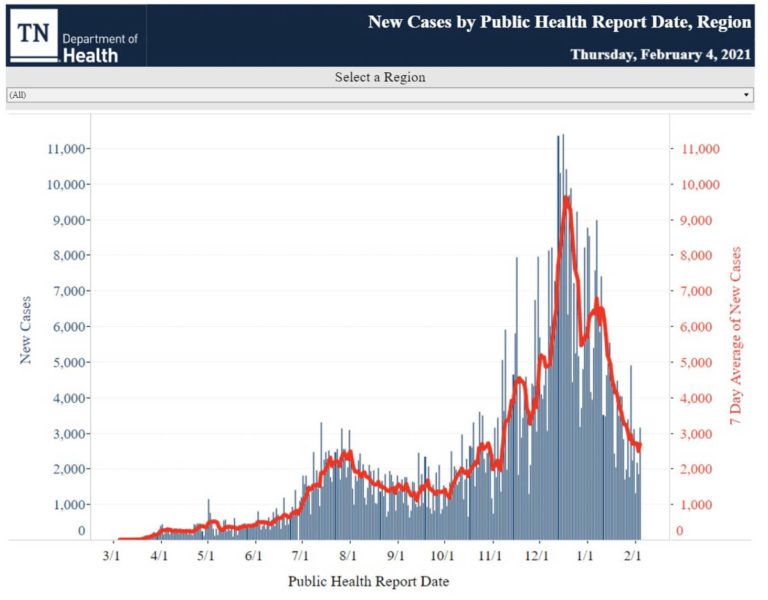 Happy weekend, everyone. Best enjoy the sunshine if you get a chance because next week promises to be messy. Other options this weekend include reading the excellent new installment on John Weaver’s great blog “Lost and Found in Knoxville.” In this installment he looks at the lost history of the 700 block of Gay Street, the spot where 225 years ago tomorrow a state we all love came into being. After reading John’s excellent article, plan to pop online to watch an online world-premiere of the documentary, “Birth of Tennessee,” brought to you by the fine folks at Blount Manson and featuring Jack Neely of the Knoxville History Project.

The state reported 3,154 new cases yesterday, bringing totals for Tennessee to 622,951 confirmed cases and 113,419 probable cases. 697,110 cases are considered inactive, while 29,058 people have confirmed active cases of the virus. The number of active cases continues to plummet and is currently about the level first reached in early November. The state has averaged 2,684 new cases per day over the last seven days, up over 200 from the previous day, but well below numbers from a month ago.

107 COVID-positive Tennesseans were reported hospitalized, bringing the state’s total to 17,469 hospitalized at some point during the pandemic. The hospital census for COVID-positive Tennesseans has resumed its sharp drop, falling to 1,443, lower than it has been at any point in the last three months. Numbers of ICU and ventilated patients with the virus also continues to drop, now sitting at 419 and 229 respectively. These numbers are also among the lowest in the last three months.

One unfortunate reason for the continued drop in hospitalization numbers is the continued high pace of deaths from the virus in the state, most of whom were likely in hospitals. While deaths should be expected to fall sharply in response to lower case and hospitalization rates, it hasn’t happened, yet. Yesterday, as with many other days recently, there were more deaths than new hospitalizations. Add the discharges of people who get better and the numbers drop. As deaths drop, I expect to see hospitalizations level out, if not rise slightly.

The state reported 169 additional deaths from COVID-19, bringing the total deaths to 10,202. The number marks the third worst day since the beginning of the pandemic for deaths in the state. It also makes four consecutive days of over 100 deaths, only the second time that has happened in the state. The first time was last week. The average number of daily deaths over the last seven days has been 112. This is one shy of the record set last week.

The state reported 29,948 tests yesterday, bringing the total closer to 6.4 million since the beginning of the pandemic. The number of tests reported is closer to the 30,000 to 50,000 the state was reporting each day prior to the holidays. The most encouraging statistic for the day is that, as you would expect with a larger test volume, the positivity rate dropped with the increase in tests. At 8.23%, it is the lowest I remember for a given day in many months. Johns Hopkins University is reporting a declining rate and pegs the last seven-day average at 12.6%.

State vaccination numbers have been updated and, while far short of the numbers needed, continue to trend slowly in the right direction. The state is reporting a total of 757,488 shots have been given, including 12,201 the day before and 159,470 in the prior seven days. 7.79% of state residents have received at least one shot, with 296,546 having gotten the first only, and 229,869 having gotten both shots. At the current pace, 100% of Tennesseans would be vaccinated within 566 days, or by August 25, 2022.

As is generally the case the day after the state reports higher test and case numbers, case numbers rose in Knox County today. The county reported 173 additional confirmed cases of COVID-19, far below totals from a month ago, but higher than the previous three days. The new cases bring the county’s numbers to 37,763 confirmed cases and 5,940 probable cases.

40,916 cases are considered inactive, while 2,291 Knox County residents have a confirmed active case of the virus. Active numbers have steadily fallen with the drop in numbers of new cases. The current number is lower than any reported since December 6.

Hospitalizations have also continued to fall, with 77 COVID-positive Knox County residents hospitalized today. While it brings the total to 1,157 since the beginning of the pandemic, it marks the smallest number reported since November 14.

As is the case at the state level, local deaths do not seem to be slowing significantly. An additional six deaths were reported today, bringing the county total to 496 who have died from the virus. The six today include one person between 45-64 years old, one person between 65-74 and four people age 75 or older. Hopefully, deaths will soon be impacted by the vaccinations of older residents. Twenty deaths have been reported in the first five days of this month, compared to twenty-two in the first five days of January, so perhaps the rate is slowing slightly.

The state is reporting a 12.6% positive test rate for the county.

Active cases of COVID-19 are up by one from the previous report to 188, including 136 students and 52 staff members. 2,838 are considered recovered, while 2,163 are currently quarantined or isolated due to having the virus or an exposure. Of these, 1,944 are students and 219 are staff members. This number remains slightly lower than recent levels.

The University of Tennessee is reporting 103 active cases, down slightly in the last few days. The number includes 90 students and 13 staff members. 2,650 are considered recovered, and eight new cases were reported.

The 293 people currently in isolation or quarantine is the highest the number has reached since the return of students for the spring semester. 49 of this group are staff members, 108 are residential students, and 136 are non-residential students.

No additional clusters were reported today.

The biggest news was that the University of Tennessee Student Health Center has started vaccinating staff and others who are eligible under phase 1-A and 1-A2. This includes medical providers and faculty members over 70. He said they had administered 300 vaccines today, with hopes of reaching 700 later in the day. They intend to continue giving vaccines as the eligibility expands. They also hope to offer public events as supply becomes available.

Dr. Plowman said the most recent cluster was identified through the pooled saliva testing, which found a case. Contact tracing led to the gathering which produced 10 cases and 6 close contacts.

4,696 samples were collected for testing last week. 83 people were referred for testing as a result. Twelve cases were identified. Student participation rate was 71.2% and the positive test result rate was lower than 2%.

It was interesting that there was no mention of the biggest COVID-19 news story coming out of the campus this week. The UT women’s basketball team had both its games cancelled this week due to COVID-19 issues, apparently one case and several close contacts.