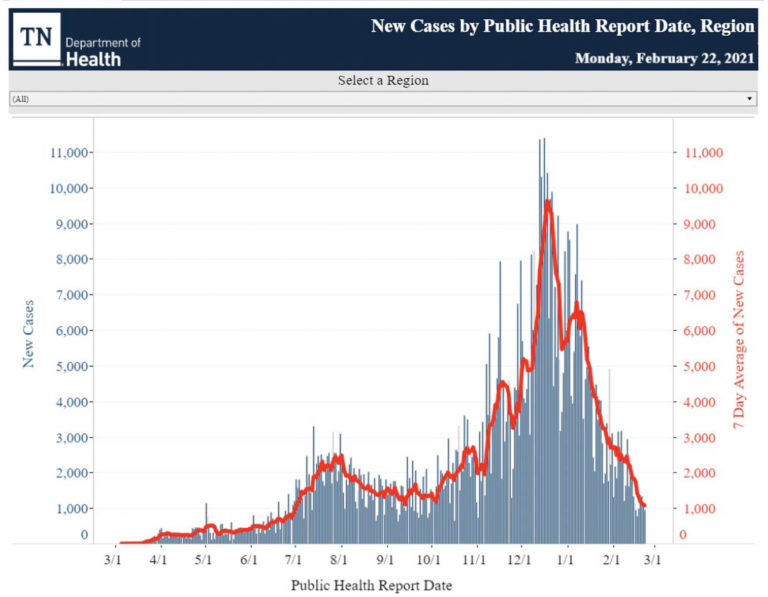 Today is a beautiful, sunny, (relatively) warm day. Get outside and sing with the birds. I’m guessing more than a few of us could use some vitamin D. I think Urban Boy and I may kick around downtown a little this afternoon. The day is full of promise of the coming of spring. Be vigilant and protect yourself in the meantime. We are ready to burst out singing, but we aren’t quite ready to form a choir, just yet.

Tennessee reported 952 additional cases of COVID-19 yesterday, bringing the totals to 643,282 confirmed cases and 122,807 probable cases. 738,731 cases are considered inactive, while 16,205 Tennesseans currently have an active case of COVID-19. This represents the lowest number of active cases in the state since October 6. The seven-day average for new cases is 1,075, the lowest seven-day average since June 30.

An additional 27 COVID-positive Tennesseans were admitted to the hospital yesterday, bringing the pandemic total to 18,311 hospitalized with the virus. 960 are currently hospitalized across the state, down 47 from the previous day. The number in the hospital has continued to drop, but much more slowly than the blistering pace of recent weeks. 272 COVID-positive Tennesseans are currently in ICUs across the state, while 152 are on ventilators.

Twenty state-wide deaths were reported from the virus yesterday, continuing a trend of lowering death numbers. 11,153 Tennesseans have died of the virus since the beginning of the pandemic. After reaching a peak of 135 on February 5, the seven-day average has dropped dramatically and now sits at 31. It has stabilized in the upper twenties to lower thirties for the last several days, a death rate similar to that in late October for the state.

Reported test levels dropped to a low number, even for recent weeks, with the state reporting only 6,909 tests yesterday, as state pandemic testing nears 6.7 million tests given. The positive test rate for the day was 9.94%, up slightly from recent days and probably attributable to the low test levels. The positive rate, however, remains far below the highs previously recorded. Johns Hopkins University has the seven-day average positive test rate continuing to climb after a long decline. After reaching a low of 8.7%, the rate has risen for five consecutive days and has now reached 11.4%.

In the newest vaccination report from the state, the pace of inoculations increased slightly over yesterday’s disappointing numbers but has yet to recover to previous levels or to approach needed levels. The state reports 1,131,689 vaccinations have been given, including 14,213 the day of the report and 101,048 the previous seven days. 376,426 Tennesseans have gotten both shots and 10.66% of the state’s population have gotten at least one shot.

At the slightly improved rate of vaccinations, all Tennesseans would be vaccinated 868 days from today, or by July 11, 2023.

The Knox County Health Department reported 31 new cases today, a stunningly low number after recording as many as 724 on a single day just about eight weeks ago. The last time Knox County recorded fewer cases in a single day was July 12 (19). The stunning decline in cases could not have been anticipated and it offers a great opportunity if we vaccinate as quickly as possible and continue to wear masks and avoid gatherings just a bit longer. County totals have now reached 39,488 confirmed cases and 6,807 probable cases of the virus.

For the second consecutive day, the Knox County Health Department reported three additional deaths, bringing the county total to 528 since the beginning of the pandemic. Of the three reported today, two people were between the ages of 65 and 74 and one was 75 or older.

The state is reporting an 11% positive test rate for Knox County over the last seven days. County vaccination numbers have been updated and indicate 84,920 vaccinations have been given in the county. 55,770 county residents have had one shot, while an additional 28,933 are fully vaccinated. 11.86% of county residents have received at least one shot.

Dr. Buchanan began today’s briefing expressing sympathy for the 500,000 U.S. residents and over 500 Knox County residents who have died of the virus. She said 17,000 people are currently on the KCHD website and asked that anyone who has been vaccinated, but remains on the list, to please call to remove their name.

Vaccinations continue through the week and will soon move to the former Food City location on Broadway. No firm date for use of the building has been established. She confirmed the above health and vaccination numbers.

The Knox County School system is reporting a large drop in active cases. Friday’s report indicated 137 active cases, while Monday afternoon’s report included 93. The number is the lowest reported by the school system since November 20 (93).

3,236 students and staff are listed as recovered and 921 are in isolation or quarantine, the lowest since the beginning of second semester. Of the 921, 77 are staff and 844 are students.

The University of Tennessee is reporting 71 active cases of COVID-19, down 10 from the previous day and a bit below the range where the number has remained in recent weeks. 2,860 students and staff have recovered, and six new cases were confirmed today. 351 students and staff are in isolation or quarantine, including 44 staff members, 220 residential students, and 87 non-residential students. The 351 reflects a recent decline from a semester high of 395.

One new cluster, this one at Phi Mu house has been identified.