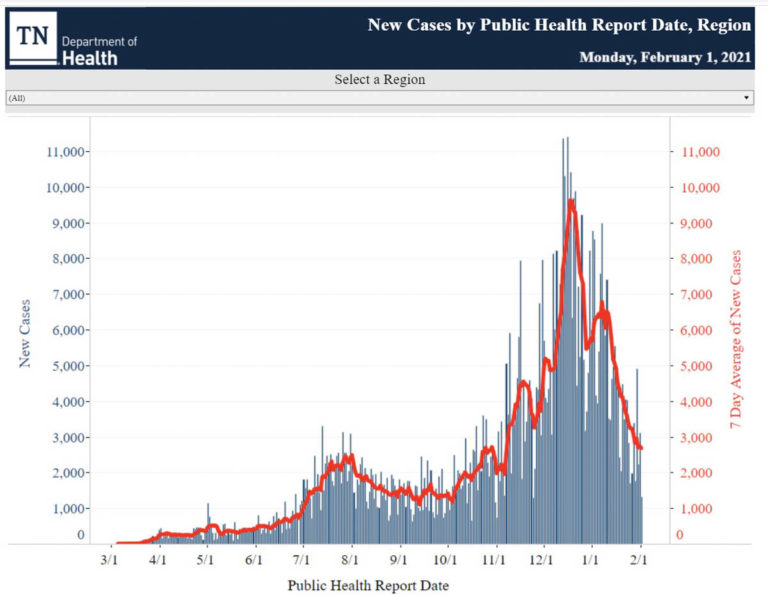 It’s the dead of winter. Groundhog Day. Want a way to shake things up? How about joining a stage three clinical trial with the Novavax vaccine through PMG Research? It is a good way to possibly get a vaccine early and help others. It is certainly something different to help move the winter along. Just follow the link.

The state of Tennessee reported 1,326 new cases yesterday, bringing totals to 618,319 confirmed cases and 110,868 probable cases. 685,162 people are considered to be recovered or have an inactive case of the virus, while 34,272 Tennesseans are currently COVID-positive. The seven-day average for new daily cases is 2,820, continuing the downward trend, though at a slower pace.

An additional 52 COVID-positive Tennesseans were hospitalized yesterday, bringing the total to 17,172 hospitalized since the beginning of the pandemic. 1,536 COVID-positive Tennesseans are currently hospitalized. While the number continues to decline, the decline appears to have slowed dramatically, with only 20 fewer in this report than the day before. 431 of those hospitalized are in ICUs, while 251 are on ventilators. Each of these numbers are up slightly from the day before, further signaling the decline may have stalled.

103 Tennessee deaths were reported from COVID-19 yesterday. The death toll from the virus has reached 9,753 and the pace has not slowed in the same way as cases and hospitalizations. The seven-day average for deaths in the state fell from the previous day’s record 113 to 112. Of the sixteen times the state has reported more than 100 deaths for a single day, eleven have come since the beginning of 2021. The most recent sharp decline in cases began almost a month ago, so logic would suggest we should soon see the sharp decline in deaths if it is coming.

Testing continues to be erratic, with returns to more normal levels of more than 30,000 or 40,000, followed by days below 10,000. Yesterday afternoon, the state reported 9,606 tests were processes, with a 10.69% positive test rate. If we had tested at pre-holiday levels, we would have had over 5,000 new cases yesterday, even at the lower positive test rate. Johns Hopkins University is reporting an average 13% positive test result rate over the last week for the state.

The Knox County Health Department reported 60 additional confirmed cases of COVID-19 in Knox County today. It is the lowest single-day total reported since October 17 (44) and reflects the drop in testing mentioned above, as well as, perhaps, truly improving conditions. The new cases bring our totals to 37,385 confirmed cases and 5,740 probable cases.

Two additional deaths of Knox County residents were reported today, bringing the total to 484. One of the people whose death was reported today was between the ages of 64 and 75, while one was 75 or older.

In additional news, the Knox County Health Department announced today that, as the state announced yesterday, they are expanding eligibility to those 70-years-old and older, a drop from the previous limit of 75 and up. As demand has continued to far outpace supply, the addition of about 21,000 to the eligibility pool could make a difficult situation more complicated. The Health Department continues to promise a website with a waitlist option.

Dr. Buchanan began today’s meeting stressing heart health in honor of the month. She addressed the expansion of eligibility and said it was done in response to the fact that surrounding counties had their eligibility changed by the state. By matching the surrounding counties, it was felt it would reduce confusion, though she acknowledged the supply is still not available to cover those in the previous 75+ categories.

She said over 2,000 new doses are being given this week based on last week’s shipment. She, again, mentioned the wait list system which is coming “soon.” She updated data on vaccinations, saying it the page will be updated twice a week going forward (Tuesdays and Fridays).

She reviewed the current numbers of cases, hospitalizations, and deaths (reported above).

Today’s Knox County School numbers are more reflective of trends elsewhere, with active case numbers and isolation/quarantines dropping significantly. Whether that is a variable of a beginning of the week pattern or something more long-term, we’ll see. The system is reporting 160 active cases, down from 216 the day before. Of the 160, 111 are students and 49 are staff members.

2,778 are reported as recovered, while 1,713 remain in quarantine or isolation. The isolation/quarantine number is down from 2,362 the day before. Included in the current number are 1,521 students and 192 staff members.

All metrics remain the same, with student and teacher attendance rated green, cafeteria and bus service rated green, and custodial service rated yellow, while substitute availability remains red. These metrics are for the system and do not reflect the situation at each school, which explains why some schools switch to virtual-only instruction. One additional school was added to that list today. The current list for virtual-only instruction now includes the following:

An additional cluster was reported, bringing the total to three since the return of students for the semester. The latest cluster was due to an off-campus gathering, making it the second such spread-event. The other cluster was in an on-campus sorority house.