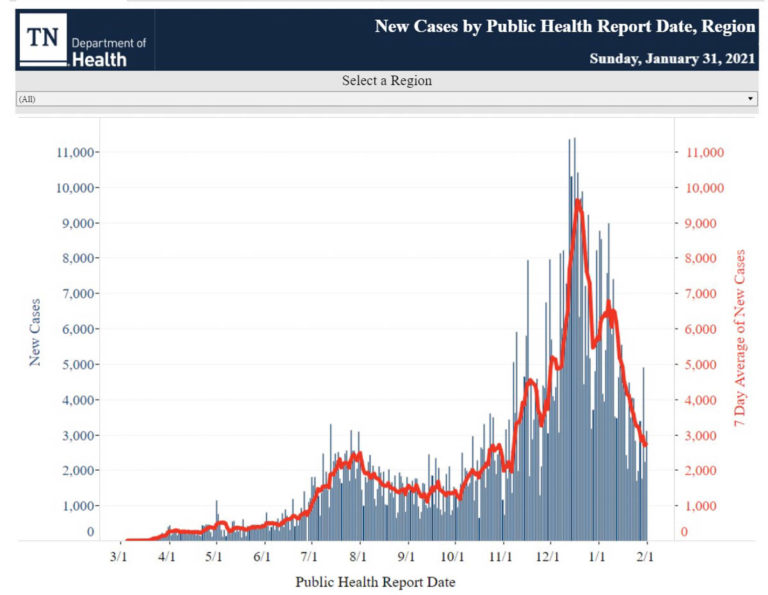 I never imagined waking on a snowy first day of February only to have my thoughts immediately turn toward vaccination impacts of the weather on New York and other northeastern states. It may just be me. As has been reinforced, however, for those of us paying attention: As New York and California go, as South Carolina and Mississippi go, we all go.

We are in this together and cannot isolate one state from another. Political divisions are irrelevant on a personal level when confronted by a virus that simply wants to survive, even at the expense of our survival. The pandemic has become subsumed in the morass of politics here and elsewhere around the globe. If only we could recognize the connection of our simple humanity. Losing your grandfather or mother is the same no matter who got your vote in the most recent election.

Just over 103.6 million people around the world have been diagnosed with COVID-19. This includes about 3.8 million over the last week. The pace of new cases continues to decline, as 4.3 million were diagnosed the previous week. This week saw the number of cases cross the remarkable level of 100,000,000 cases.

About 77.5 million people are considered recovered, while over 26.1 million people (a record) have an active case of the virus. The number of active cases is about 200,000 higher than last week and has continued to rise, though at a slower pace. Over 2.2 million people around the world have died of the illness, including about 97,100 this week, down about 900 from the previous week.

The peak day for cases during the last week was January 28, with just under 608,000 new cases reported. While high, it is well below peaks in recent weeks and four separate days the previous week each had higher numbers. Over the last seven days, worldwide average cases have dropped to 528.6 thousand per day, down from 588.5 thousand a week earlier and marking the fourth weekly decrease in the daily rate. The current rate is now like that of early November.

Though it is too early to be certain, we may have experienced the peak of global deaths from the virus, with the seven-day average reaching 14,386 per day on January 26, before dropping its current level of 13,870 per day. The record of 17,554, set on January 20, was not broken this week, which is significant as each week has since mid-October had seen the single-day record for deaths fall to a new high. The average has fallen just over 100 since the last weekly summary.

While the sudden drop in U.S. cases may be somewhat mysterious, the drop across the rest of the world is largely attributable to serious lockdowns which cover much of Europe and reach many other corners of the world. In an example of the contrast between our country’s approach and the approach being taken elsewhere, consider that western Australia is in a five-day lockdown after the discover of one case, which is the first in the area in nearly ten months.

France is considered less restrictive than other European countries and yet, it has restrictions that would likely set off a war in the U.S., with curfews from 6pm to 6am every day and all cafes, theatres, and museums are closed. The vaccines currently in use are continuing to show evidence of effectiveness against all variants with the possible exception of the South African variant. Meanwhile, the South African variant is spreading across the U.K. Portugal reported nearly half its total death toll in January alone. Israel, which has been on a serious lock-down since December, has extended restrictions. It also plans to have its entire over-16 population vaccinated by the end of March.

The United States has reported just under 26.8 million cases of COVID-19, including about 1.1 million over the last week, with the pace declining each of the four most recent weeks. About 16.4 million are considered recovered, while just over 9.9 million people, roughly the same number as a week ago, have an active case of the virus. Over 452,000 Americans have died of the virus, up about 22,000 from the previous week, the same increase as the week before.

Yesterday, 107,816 new cases were reported, along with 1,886 deaths. Compared to the same day a week earlier, cases dropped by about 27.5 thousand, continuing the downward trend, though at a slower rate (last week the drop was about 39,000). Deaths remained remarkably steady, with an increase of only 35 over the previous week which, in turn, was 5 higher than the week before. The current seven-day average of 150,903 new cases per day is down almost 27,000 from last week and has dropped to levels last seen in early November.

Deaths in the U.S. continue to show signs of plateau and, perhaps early decline. The seven-day average for U.S. deaths is 3,255 per day, up from 3,183 a week earlier, but lower than the two weeks before that. The 3,439 reached on January 26 is the high-point for the pandemic to this point.

Seven states reported more than 100 deaths for the day yesterday, up two from the total on the same day last week. North Carolina dropped from the group, while Iowa, Alabama and Pennsylvania joined. it is particularly notable that Alabama and Iowa could join the group, given the massive population differential with the other states on the list. The leaders in deaths for the day were Iowa (250), California (226), Texas (179), New York (162), Alabama (122), Florida (120), and Pennsylvania (113).

January was the deadliest month on record for COVID-19 in the U.S., though hospitalizations have dropped below 100,000 for the first time since December 1. Johnson and Johnson’s vaccine may be approved for the U.S. as early as the next couple of weeks, with the company saying it can provide 100,000,000 single-shot vaccines by June which, combined with other vaccines should give the U.S. adequate supply to vaccinate all adults. Anti-mask, anti-government protests have now expanded to include anti-vaccination protests.

On Saturday, a vaccination site had to temporarily shut down until law enforcement arrived, due to protestors who held up signs promoting vaccine conspiracy slogans. The L.A. Times reported social media instructions delivered before the effort included, “Please refrain from wearing Trump/MAGA attire as we want our statement to resonate with the sheeple.” Perhaps most discouraging are the results of recent polling that show:

. . . about 40% of the American public believes the coronavirus was created in a lab in China and that 17% believe the false QAnon conspiracy theory that politics and the media are controlled by “a group of Satan-worshipping elites who run a child sex ring.” (And 37% said they don’t know whether that one is true or not.)

A group of ten senate Republicans have offered an alternative to President Biden’s proposed $1.9 COVID relief bill, recommending a much more modest $618 billion package. It is unclear what will happen next. Should the package be accepted outright it would likely fail passage as many Democrats would reject it. A compromise would likely lose some of the ten Republicans as well as some Democrats. The only alternative for quick action may be pushing the full proposal through on a party-line vote, which would likely poison whatever hope remained for bi-partisan cooperation.

In the three days since the last update, Tennessee reported 4,908 cases on Friday, 2,251 on Saturday and 3,119 on Sunday. The daily average has fallen to 2,734, the lowest it has been since November 7. We are reporting an average of roughly 600 fewer cases per day than just a week ago. State totals have reached 617,405 confirmed cases and 110,456 probable cases.

683,295 Tennesseans are considered to have inactive cases of the virus, while 34,916 are considered active, roughly equivalent to late November levels and nearly 11,000 fewer than one week ago. 28 Tennesseans were hospitalized with the virus yesterday, bringing the total to 17,120 since the beginning of the pandemic. The number currently hospitalized continues to plummet, with 1,566 currently hospitalized. The number is far fewer than half the peak and about 30% fewer than just a week earlier. ICU and ventilator patients also continue to drop and now total 426 and 249, respectively.

Deaths reported by the state since the last update, include 44 on Friday, 113 on Saturday, and 76 on Sunday. 9,650 Tennesseans have now died of the virus. The average number of daily deaths has risen to 113, the highest it has been at any point during the pandemic. The number is nearly double the 66 from the same day a week earlier.

Testing continues to be reported at volatile levels, with fewer than 5,000 on Friday, followed by over 45,000 on Saturday and over 32,000 on Sunday. Over 6.3 million tests have been given and the state ranks 22nd in per capita testing in the U.S. Positive test rates also continue to drop, with the state reporting 8.52% for the day yesterday, and Johns Hopkins University reporting a seven-day average 12.9%. The seven-day average is the lowest for the state since late November.

Through yesterday, the state reported a total of 654,537 vaccines have been given, including 2,077 the previous day and 163,327 for the week. 185,977 Tennesseans have gotten both doses of the vaccine. Relative to the report a week ago, the vaccine rate has increased about 60%. At the increased rate, every Tennessean could be vaccinated in the next 556 days, or by August 11, 2022. While discouraging, the projection is nearly a year better than the projection from one week ago.

Of course, this is based on the entire population of the state and 1) Children are not currently planned for vaccination, 2) Not all adults will choose to be vaccinated, and 3) Not everyone has to be vaccinated for the virus to be more-or-less defeated.

Since the last update, the Knox County Health Department reported 91 new cases on Saturday, 108 on Sunday and 213 today. County COVID-19 case totals have reached 37,325 confirmed cases and 5,694 probable cases. Of these, 40,082 cases are inactive, while 2,455 Knox County residents currently have a confirmed active case. It’s the lowest active case number in the county since December 6.

Current hospitalizations also continue to drop dramatically, with 86 currently hospitalized. While 1,136 have been hospitalized with the virus at some point during the pandemic, the current number reflects the lowest at any given time since November 21.

The state is reporting a 15.5% positive test rate for Knox County. The county dashboard is reporting 34,332 doses of the vaccine have been given in the county as of 1/26. The data will be updated on Wednesday.

As of Friday afternoon, the Knox County School system is reporting 216 active cases of COVID-19 among students and staff, down nine from the day before. The number includes 166 students and 50 staff members. 1,831 have recovered and 2,362 are currently in quarantine or isolation. Isolation and quarantine numbers are up about 100 from the previous day and include 2,152 students and 210 staff members.

Metrics continue unchanged, with student and teacher attendance, cafeteria support and bus service all rated green, while custodial support remains yellow and substitute availability remains red. Though all students were taught virtually today, because of the threat of bad weather, when schools resume tomorrow, three will be virtual-only:

272 students and staff are in quarantine or isolation, including 118 non-residential students, 108 residential students, and 46 staff members. No additional clusters were reported, leaving that total at two for this semester, one at a sorority house and one off campus.