COVID-19: The State and Local Review by Month 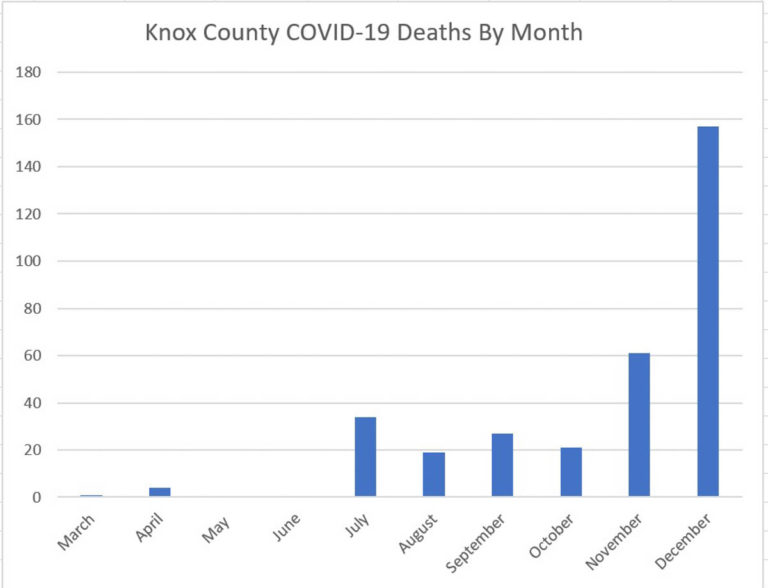 Special Editor’s Note: At this time, I expect the site to be down tomorrow, re-emerging on Thursday. This is a necessary break for technical reasons. I think you will be pleased when it returns.

Today we’ll look at the state and local cases and deaths by month through December. While it is easy to get glassy eyed looking at the numbers every day and easier still to become numb to numbers as they rise, taking a wider angle view once each month can help clarify larger trends and changes.

The charts for this month mostly speak for themselves. I’ll add a little commentary, but, really, don’t they tell the story graphically? And, of course, the stories are parallel to one another.

For the state of Tennessee, the case levels in the early months were easy to dismiss. June was a bit disconcerting, as cases nearly doubled, from roughly 12,000 to 21,000. July was the month that caught the attention of many in the state, when cases more than tripled on top of that, to over 62,000.

Still, most of us didn’t know anyone who’d had the illness, and when numbers declined in both August and September, it appeared we might have weathered the worst of it and that wasn’t so bad. The October was worse than July. Then November more than doubled October. And December, even with testing limitations for the last third of the month, added 59% more.

Much has been made of the low mortality rate of COVID-19. People die of the flu, so what’s the difference? The difference is that far, far more people have gotten COVID-19 in ten months than get the flu in the course of a year and, even with a low mortality rate, if the number of cases is large enough, many people die.

And they are. You’ll notice a similar trajectory in each of the above graphs. But notice that August deaths shot up while cases declined. Why? Because August’s deaths were July’s cases. There is a necessary delay. Deaths did level off in September, though they never dropped, and that was a result of the lower case numbers in August.

Deaths rose by 28% in October, even though cases declined in September. The increasing trendline in new cases was set and deaths followed. After a 28% increase in deaths in October, deaths increased an alarming 39% in November. November’s 1,249 deaths in the state came close to doubling the total of just two months earlier, when 700 had died.

For Knox County, the patterns are similar, but more extreme. After incredibly light months from March through May, June showed a sharp increase, but the case numbers were so low, that didn’t seem like a significant threat. When cases jumped by 457% from June (509) to July (2,834), there was clearly cause for alarm, but then they leveled off, for the next three months.

During that period, it was easy to become more accustomed to the higher level of numbers. We had another long stretch of stability and it was easy to think that was the worst of it. Then cases increased by 64.9% from October to November. It seemed we’d joined other cities who were being hit hard.

Unfortunately, as the graph shows and we now know, November was not the worst of it by a long measure. Cases in Knox County – after what we thought was a bad November, increased by 122% in December. In a single month we went from 5,364 cases, or about 179 new cases a day, to 11,888 cases, or about 383 cases per day. And that in a month with the most serious limitations on testing and reporting we will see during the entire pandemic.

I should probably just say look at the chart on this one. For the first four months of the pandemic, we had one person die every 24 days. July felt like a bit of a wakeup call, with a person dying each day, but then deaths dropped and didn’t regain that rate for three months. It seemed to many of us like it couldn’t be that big a deal.

November made that denial more difficult, as cases suddenly were at triple the rate of the month before and about two people a day were dying. As with some earlier months in case counts, it seemed we’d hit the worst of it. Not by a long shot. Deaths in Knox County soared in December, going up another 157%. 157 people died of the illness in December, or about five per day.

I think the trajectory is set for January across the state and the county. There will be more cases reported in January than in December if testing returns to normal levels. There is nothing that has happened to this point to interrupt the trajectory. We haven’t suddenly started wearing masks more consistently or avoiding gatherings more assiduously. There are no state-wide mandates or lockdowns coming. Vaccines aren’t coming fast enough to make a difference this month.

And deaths? Deaths are about to rise to shocking levels across the state and county. December’s cases are January’s deaths. Cases went up 59% in December statewide and 122% in the county. Hospitalizations set records throughout the month and we enter January at record levels. If hospitals become overwhelmed, mortality rates will increase.

What can we do?

We all know what to do. We can’t do anything about the first half or more of January, but you and I can have an impact on February if we strictly practice the simple things we’ve been asked to do, like wearing masks and not gathering with others. As a collective group, so far, we have failed. Tennessee is the fourth worst state in the worst country in the world for COVID-19 cases. We are moving up in per capita deaths.

The vaccines will help us eventually, but will we step up in the meantime? If not, February could look a lot like January and, I promise you, that is not a good thing.